Call it Saturn on steroids! Astronomers have discovered an exoplanet with an enormous ring system that far surpasses Saturn's.

“This planet is much larger than Jupiter or Saturn, and its ring system is roughly 200 times larger than Saturn’s rings are today,” Dr. Eric Mamajek, professor of physics and astronomy at the University of Rochester and the leader of the team of astronomers, said in a written statement. “You could think of it as kind of a super Saturn.” 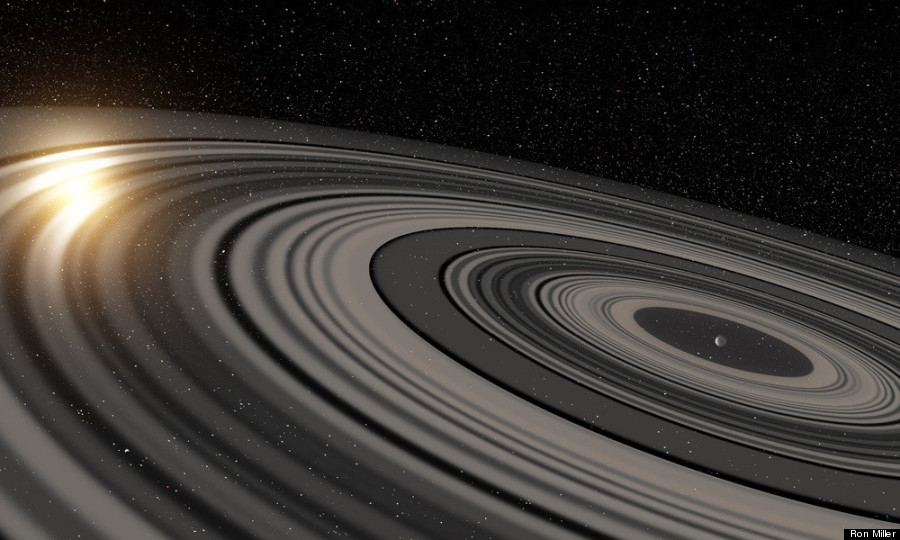 Artist’s conception of the extrasolar ring system around exoplanet J1407b. The rings are shown eclipsing the young sun-like star J1407, as they would have appeared in early 2007.

The ring system--the first ever discovered outside our solar system--is believed to be made up of 37 rings, each of which measures tens of millions of miles in diameter. The system has a diameter of approximately 75 million miles, and is believed to contain an Earth's-worth mass of dust particles, along with a potential exomoon.

The exoplanet at the center of the rings, dubbed J1407b, has been estimated to be at least four times as massive as Jupiter.

The rings around J1407b are so large that if they were put around Saturn, we could see the rings at dusk with our own unaided eyes. Here are the rings as they would be seen in the skies at Leiden University in the Netherlands.

Mamajek and his collaborators first hypothesized the ring system's existence in 2012, when they noticed something eclipsing J1407, a young sunlike star located 420 light-years from Earth. The eclipse showed up in the star's so-called "light curve," a graph of the star's brightness captured over two months.

"The eclipse lasted for several weeks, but you see rapid changes on time scales of tens of minutes as a result of fine structures in the rings,” Dr. Matthew Kenworthy, an astronomer at the Leiden Observatory in the Netherlands and a member of the team, said in the statement. “The star is much too far away to observe the rings directly, but we could make a detailed model based on the rapid brightness variations in the star light passing through the ring system."

The model helped the team estimate J1407b's mass and the size of the ring system (see an animation of the model here). It also revealed a clearly defined gap, suggesting the presence of a satellite carving its way through the rings.

To learn more about the strange planet and its rings, the astronomers are asking amateurs to help monitor the light coming from J1407.

The research has been accepted for publication in the Astrophysical Journal.

CLARIFICATION: This post has been updated from a previous version to specify the dimensions of the rings in terms of diameter.

PHOTO GALLERY
If Planets Were As Close As The Moon...
Macrina Cooper-White
Associate Science Editor, The Huffington Post
Suggest a correction

Stupendous Ring System Discovered Around 'Super Saturn' Exoplanet
If Planets Were As Close As The Moon...