Holy acrobats-light show-unicycles y'all- Ringling Brothers brought it. And now, they're bringing it to you. "It" being their new show, Out of This World. I went to Florida (to the 580,000 square foot complex that houses the Ringling Brothers family!) to preview a few of the acts, and the opening of the show - oh my wow. I thought I was going to see some hoops, a bit of flying trapeze shenanigans and popcorn- but saw so much more.

I left this experience totally star-struck by these obscenely talented people. I'm not even sure they're people- they're so skilled they may actually be from someplace out of this world. (I also left with videos of me jumping rope and unicycling with the Saint Charles Troupe- and when I say "unicycling" I mean "me being held up on a unicycle and pushed around by two strong men.") 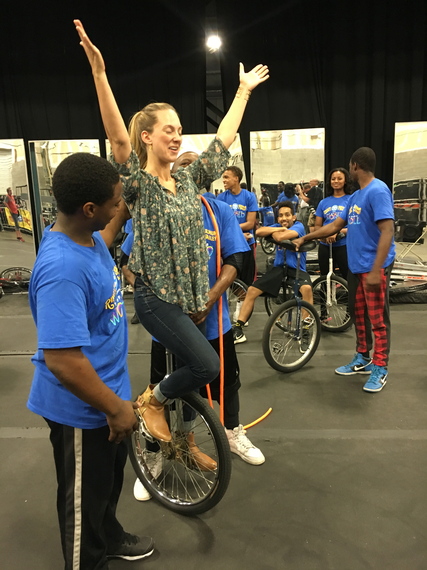 Here's what the new show delivers: 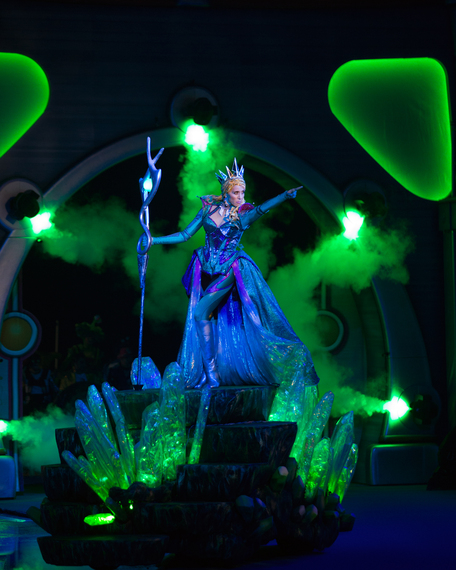 For the first time ever, there is an actual story the acts are woven into. Instead of one awe-worth (but usually unconnected) act after another, they're melded together to lay out an intergalactic tale making you invested in the characters fate. 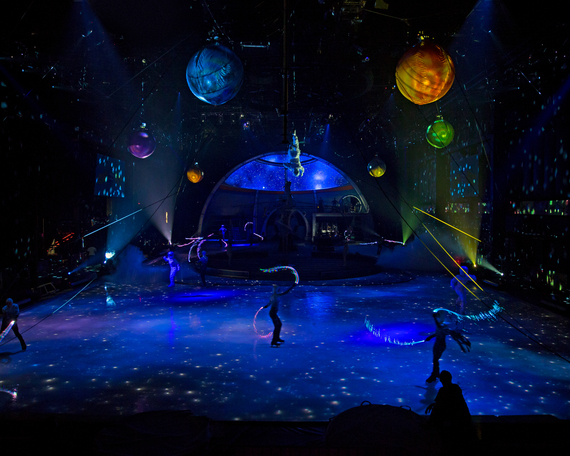 They turn a floor of ice into a spaceship, another galaxy and other such space-like wonders using new projection software that can make you feel like you're actually being sucked into a worm hole. The costumes of the main characters also have their own tech-savvy tricks with sensors in the clothing wirelessly connected to spotlights that follow the movement of the characters to ensure they always have a spotlight on them. I wish I could use that technology on my toddler.

• Unicycles and Breakdancing On Ice: 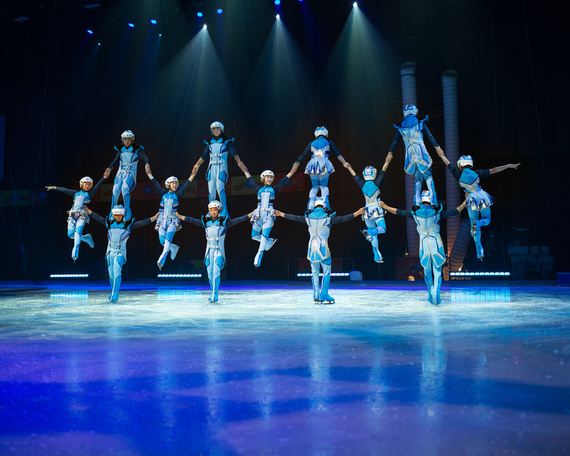 Yup, they did it, they put everyone on ice. All of the skilled performers who spent years, even decades, honing their craft had to relearn their skills... on ice. Dancers, acrobats, unicyclists, motorcyclists and other people who do crazy stuff now do their flipping-spinning-jumping-wowing on frozen water. The costume crew also had to pull some magic out of their sewing boxes to create costumes (primarily foot wear) that would adapt from ice to the rubber mat they still have in the center of the stage.

The days of the classic "da-da-da-na-na-na..." are gone. There is a kickin' band being projected through the arena playing modern music that builds with your excitement. I even caught myself conducting the tunes with my fingers while I watched a group of ice skaters zoon through a troupe of on-ice motorcyclists.

The elephants have all retired and are chilling in a sanctuary in Florida. Fun fact- did you know elephants were born with 40 cancer fighting genes? Research is currently being done to see if our long-trunked friends hold the key to cracking the cancer code. 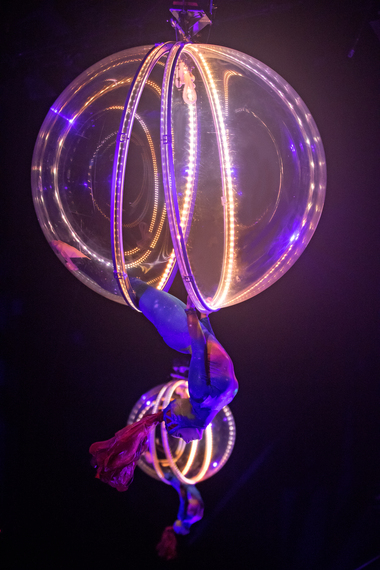 There are bendy ladies fifty-ish feet (maybe higher) up in the air, in clear open-able plastic spheres. They pretty much fold themselves in half in the sphere, then hang out of it by their feet and do even more bendy moves. If they can't inspire you to do some more yoga I don't know what will. 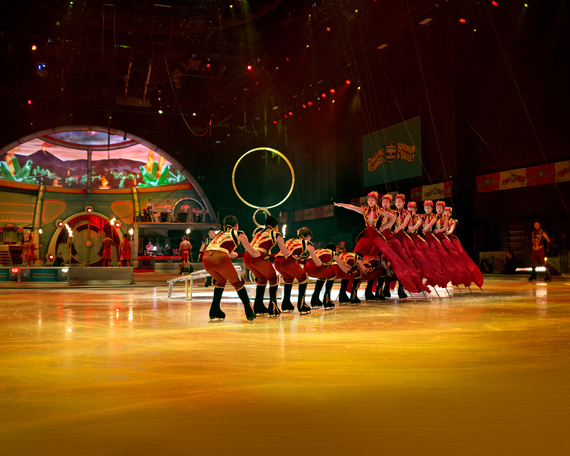 There are 16 different languages spoken throughout the cast of the show. Acts are discovered from around this world (maybe someday from out of this world?) and brought together to birth one mega-mash-up of international talent.

• Their Show Moves By Train. 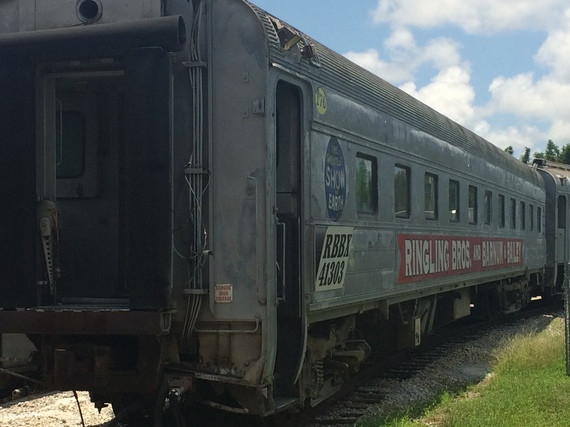 The whole show is packed up on a long train owned by Ringling Brothers and travels around the country on it for the entirety of their two-year tour. And yes, they live on the train as well. The ultimate opportunity to bond with your co-workers?

• They Keep It In the Family. 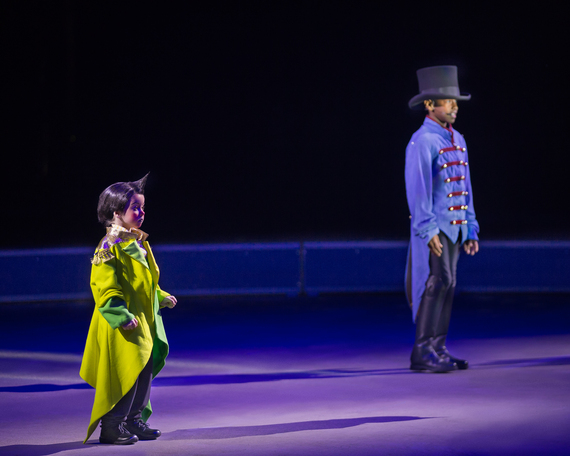 Ringling Brothers has been popping out circus acts for 145 years, and the Feld family who have owned Ringling Brothers for 50 years are the ones who produce and oversee the shows.
In addition, many of the talent are second, third, even fourth generation acrobat, lion tamer or just general circus-talent, which encompasses an insane amount of skills- did you know my unicycle friends can jump double Dutch rope and play basketball on ice (while they're on their unicycles!)

So yes, this show has stolen my heart, and I'm a giddy/stoked (past) schoolgirl at the thought of taking my family to the show when it premiers. I have visions of my son leaning forward in his seat and not blinking for the entirety of the show.
And although I didn't see it at the rehearsal, I'm guessing there will still be popcorn at the full show.