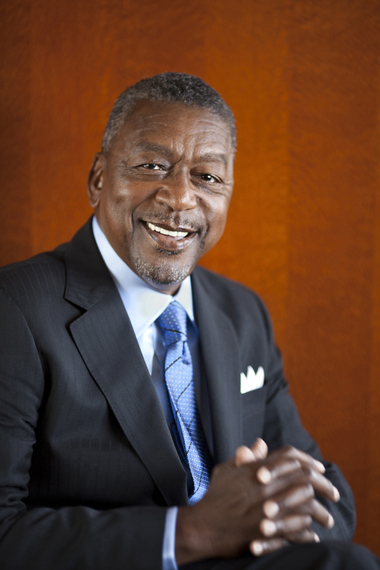 Robert L. Johnson is an American success story by any measure. Born in Mississippi and raised in Middle America, Johnson made a name for himself in the nation's capitol and ascended to the heights of big city capitalism on his own terms.

You may know him as the founder of Black Entertainment Television (BET), his reign there ended with retirement in 2005 and ushered him to unprecedented heights of wealth for an African-American.

He is "deeply concerned" about helping more Black Americans build wealth. These days, he is advocating for more economic inclusion for African-Americans. The Princeton-graduate readily accepts the responsibilities that come with financial independence.

"Because of what I have been able to accomplish businesswise, I have the freedom and credibility to speak out loud about it," Johnson declared. "I think somebody has to do it or else these issues are not going to be raised or addressed."

Johnson conversed with the Rinkins Report about his thoughts on corporate diversity and shared insights on how minorities can build wealth.

RR: America is becoming an increasingly diverse country that is competing in a global economy. How does this cultural reality impact businesses?

RJ: Well, diversity is a fact of life that every company should recognize. This country cannot compete economically if we do not embrace diversity and inclusion. African-Americans represent 32 million people in the US population. Hispanics are easing ahead of us in terms of total numbers and way ahead of us in the projected birth rate. So, if we are going to compete in this country, you must have employees. Where are your employees going to come from in the future? Where are your customers going to come from? They are going to come from the African-American and Hispanic communities, for the most part. So, diversity and inclusion remains facts of life and are necessary for business success.

RR: What are the benefits of inclusion?

RJ: Everyone benefits from inclusion. If people are excluded and kept out of the workforce, you will have more people who become a burden on society and taxpayers. Instead of spending billions of dollars subsidizing people who are unproductive, we should use those resources for investment in a strong, educated workforce. So, it's one of those kinds of things, you either pay me now or pay me later. A stronger, more educated workforce gives more people an opportunity to contribute to the economic growth of the nation and therefore benefits everybody.

RR: You also have some thoughts and proposals about how the government classifies minority-owned businesses?

RJ: Right now an African-American has to own 51-percent of a business in order for it to be classified as a minority-owned business and get government set-asides. The 51-percent rule is the most perverse rule that's even been enacted against the accumulation of African American capital. Conversely, a white guy can go out and start a small business and say, "I only got 9-percent" and nobody asks him whether or not he has the other 41-or-42-percent to be in business. With African-Americans, we have got to prove that we have 51% of the company. This is almost impossible because on average white Americans have ten times--and in some cases--twenty times the wealth of African Americans.I am proposing that governments give minority-owned status to firms that have at least 10-percent minority ownership.

RR: As America's first Black billionaire, it's fair to say you know a few things about financial success. How can people with average incomes build wealth?

RJ: I encourage everyone to save more and eliminate all unnecessary spending. Don't buy things you don't really need just because you think that's the way to be hip, cool or be with the "in" crowd. The real thing is saving and investing in your future and saving for your kids' future. You don't have to have a lot of money to start with. Just put aside a $100, $50 or even $10 a week and invest it. It will grow. Also, build funds for emergencies and avoid payday lenders.

Log on to RLJCompanies.com for more information. NOTE: Photo courtesy of Melissa Golden.