Are you over the annual NYC Pride Parade? Are you sick of the blatant corportization of NYC Pride in general? Are you wondering when Pride became less about queerness and more about blatant homonormativity?

Then we have the Pride party for you.

From art collective and "living magazine" The Culture Whore and promoter David Sokolowski comes RIOT, a radical queer pride fantasy on June 27 in Brooklyn that serves as a response to the nature of mainstream NYC Pride in 2014. Namely, the celebration of conformity, marriage and monogamy -- some the institutionalized systems of power and privilege that historically oppressed queers in the first place.

If this line up wasn't enough to bring you out to Brooklyn this Friday, let the prospect of drag queen Merrie Cherry wrestling inside of a "moist kiddie pool" of something sticky be the deciding factor.

The Huffington Post chatted with The Culture Whore and Sokolowski this week about RIOT in order to better understand what they are trying to accomplish with this party, how they want it to function in response to mainstream notions of NYC Pride and what exactly attendees can expect. 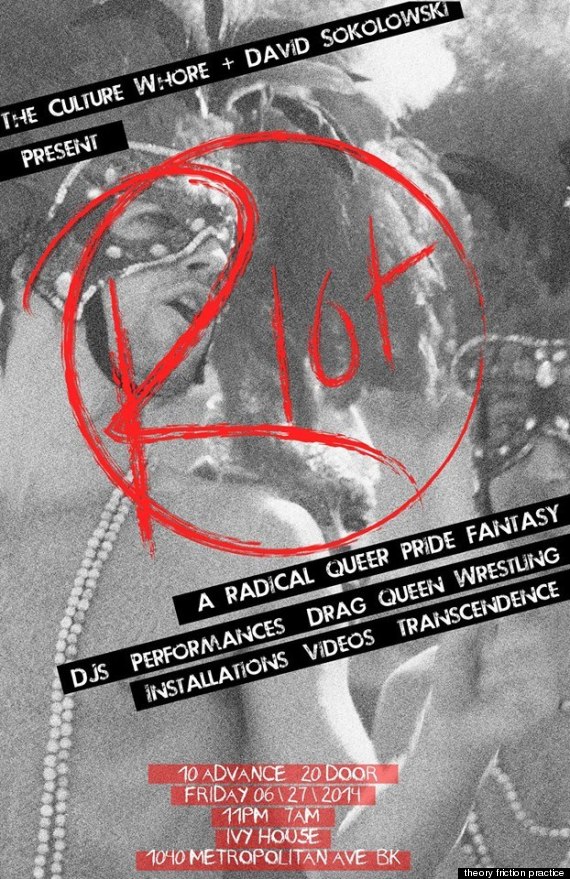 The Huffington Post: In wake of the corporatization of NYC Pride what do you hope this event accomplishes? The Culture Whore & David Sokolowski: We hope to shake people out of their complacency. We live in a community that is one of the most creative subsections of a forward thinking metropolis, and we want to remind people that all over the world, being queer is something that involves a fight every moment of every day. Pride has always been and always should be a disruptive action against the status quo, but when the world’s leading corporations are the first ones invited to participate in the most integral part of modern pride celebrations, there is a need for an uprising. We need to understand how far we’ve strayed from the radical founding spirit of Pride and call our community to action through art.

How do the performers involved with this event embody the theme of this party? The performers at Riot represent some of the best artists of our underground community, artists who already actively subvert the confines of culture and inspire us to be weirder, louder and bolder. The drag artists performing all drastically push the boundaries of what drag performance can be. The musical acts are high energy and consciously critical of mainstream culture, using their music to invigorate their fellow queers. The theatrical performance artists deconstruct pop culture in different ways, by politicizing it and by manifesting its spiritual undertones. All of this will culminate in a night of empowerment and a better understanding of our past and our legacy.

Why is this event important? The impact of the celebration will extend beyond the people that show up and rage. We’re using this event to initiate a more activist edge of The Culture Whore. A portion of the funds raised will go to benefit New Alternatives, an awesome grassroots organization dedicated to serving homeless LGBT youth that we plan to start consistently volunteering with this summer.

What can attendees expect? Guests can expect to walk into an environment where they are encouraged to be themselves and think for themselves. They'll be given the opportunity to embrace a community of queerdos who have worked countless hours to provide a space that brings people together and gives them access to a better understanding and actualization of what being queer can mean in 2014. We’re not selling brands, and we’re not selling out identity in exchange for profit.

RIOT will take place on Friday, June 27 at the Ivy House in Brooklyn. Head here for more information.