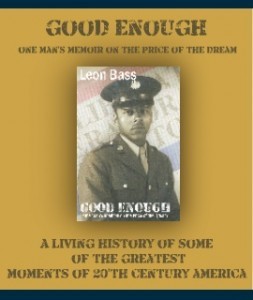 Leon Bass told the story of his remarkable life in his memoir.

No matter how glorious a life we live, how dizzying the heights we scale, death comes to us all.

On Saturday, it came to Dr. Leon Bass, a man whom I was honored to call my friend since 1997.

Leon was so many things to so many people during his 90 years of life.

A husband, father, brother and son.

A friend, neighbor and educator.

A veteran, an author and a fighter for social justice.

The lifelong Philadelphian who never forgot from whence he came lived a life rich in family, meaning, accomplishment and joy.

Leon and his lovely wife Mary had a supportive and caring marriage that last more than half a century, produced two upstanding, righteous and productive children in Leon, Jr. and Delia, each of whom had two children of their own.

He served with honor as an educator for 34 years, rising from a classroom teacher in a classroom of nearly 50 children to serve as principal at a number of schools for close to 20 years.

He completed his dissertation and dug within himself to write a memoir, Good Enough: One Man's Memoir on the Price of the Dream, that has sold thousands of copies.

These are all noteworthy and remarkable achievements, and I will remember and miss the moments we shared together.

Like the response he gave upon hearing that a colleague was about to get married for a second time.

"Once more into the breach, dear friends," Leon replied before addingl, "Remember, it's not the ring on your finger, it's the ring in your nose that counts."

Such as the time in 2000, when he was beginning a talk to a group of freshman at Dorchester High School in Boston.

When he saw that some of the students were not paying attention, the 74-year-old Bass stopped and declared, "You want to talk, you come up here and talk."

The students hushed and stayed quiet for the rest of his hourlong presentation.

Like when he would share the reverence he held for his father Henry Bass, a Pullman Porter who would encourage his son by telling him,

"Don't worry about the mule going blind,
Keep your hands on the plough
and hold the line."

And moments of wondrous connection.

Like the time when Dunreith and I went with Leon to the home of Dr. Calvin Morris, former director of the Community Renewal Society, where I worked for five years at The Chicago Reporter.

Nearly 60 years earlier, Dr. Morris had been one of those fifth-grade students Leon in the crowded classrooms he described.

Dr. Morris told me that Leon had taken the class to his home and showed the children a bookshelf filled with books.

The young Morris went home to his grandmother, who was raising him, and told her that one day he wanted to have a bookshelf just like Mr. Bass.

Close to six decades later, in Dr. Morris' home on Chicago's South Side, Leon saw the bookshelf he had inspired his former student to collect.

Dr. Morris had traveled the world, worked under the Rev. Jesse Jackson at Operation Push and been the leader for years of a venerable social justice non-profit organization.

Yet at that moment, he seemed much more like a 10-year-old boy showing his fifth-grade teacher that he had turned out well and that the older man had truly shaped his life.

Dr. Morris showed us bookshelves, but he also showed that he had absorbed the message of Leon's life, which was that it is possible to live with honesty and idealism and service and grit, that seemingly insurmountable obstacles can be met with grace and dignity and humor and love.

Leon taught us that.

Dr. Morris told that story to the audience at fundraisers for education non-profit Facing History and Ourselves that honored Leon in Chicago and Cleveland.

Before the Cleveland event I was privileged to share a lunch with the two men and one of Dr. Morris' former students who had served as a substitute teacher at Benjamin Franklin High School during Leon's final year there.

Sitting among three generation of black male educators with doctorates from Philly, I was honorary on about five levels.

But they welcomed me right in, and what a treat to hear about the gifts these men had given to their students, their community, the world and each other.

Part of the beauty of Leon's life is that he ultimately was honored for his contributions and his service, even at places that he previously had been shunned.

Former U.S. Rep. William Gray and Attorney General Eric Holder brought Leon and other black veterans who had fought in the segregated United States Army to venerate them for risking their lives to protect liberties and freedoms they did not enjoy when they returned.

With Facing History, he returned on an integrated bus to Toogaloo College in Mississippi. As a young soldier getting his training in the Jim Crow South, Leonhad been forced to stand in uniform toward the back of a bus while staring for close to 100 miles at empty seats in the front section in the front of the vehicle that were set aside for whites.

For decades he answered the call to bear witness given to him by Holocaust survivor Nina Kaleksa, who implored him to share what he had seen and done with audiences outside of the students at Benjamin Franklin High School in Philadelphia, where he served as principal for 14 long, hard years.

Leon traveled to schools and penitentiaries and community centers and churches and mosques and temples.

He told all who gathered about his anger at being told by his country that he was not good enough, about his blinders coming off when he witnessed the atrocities of the Buchenwald concentration camp, and about his becoming a follower of Dr. Martin Luther King, Jr.

Always he would ask, "Is the price too high?"

For Leon, the answer was always, "No."

Many, many teachers would introduce Leon by saying that his visit to the schools they had attended as children was the most memorable experience they had ever had in education.

Leon would often end his presentations by talking to the audience about the importance of education and love.

He'd adapt the words of James Baldwin and close by saying:

Either we love one another,
Either we hold to one another,
Or the seas will engulf us
And all of the lights will go out.
We - you and I - have an awesome responsibility
We must keep the lights shining.

Leon, you met your responsibliity more ably than anyone I have ever met.

We will miss you.