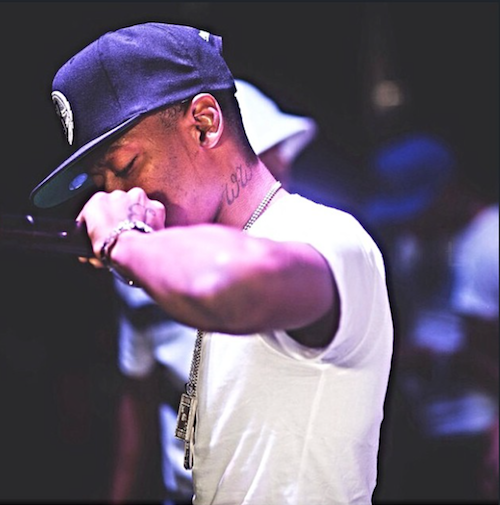 "Instead of moving out of the 'hood, let's make the 'hood what we desire it to be."-Minister Louis Farrakhan

That was a meme posted to Tyriece "Lor Scoota" Watson's Instagram page on March 13, 2016. The Baltimore rap star went on to tell a commenter on the post:

On June 25, 2016, Lor Scoota was tragically murdered in that same city.

His death hit close to home. As news circulated on Saturday evening that Lor Scoota was murdered, I was hoping that it wasn't true. Although I never knew the 23-year-old emcee personally, I--like many Baltimoreans in tune with the local hip-hop scene--felt a certain connection to Scoota. He garnered a huge buzz in the city with his 2014 single "Birdflu" off of his Still N The Trenches 2 mixtape. The accompanying Birdflu-dance went viral and Scoota's buzz started to extend out of the city. He caught the attention of fellow artists Meek Mill and Shy Glizzy (the latter of whom appeared on the "Birdflu Remix"). He even managed to spark the interest of media magnate P. Diddy who gave him a shoutout on Instagram.

On Saturday evening, following a charity basketball game advocating antiviolence, Lor Scoota was shot while driving by the intersection of Harford and Moravia roads in East Baltimore. He was taken to a nearby hospital where he was pronounced dead. This story has been told over and over again in hip-hop. Stack Bundles, Bankroll Fresh, Lil Snupe, Doe B and Chinx were all artists who fell victim to gun violence in their hometowns. All artists on the brink of commercial success.

Why do buzzing upcoming artists meet their deaths--in their own city--before they reach the peak of their success?

Boosie Badazz thinks it's because of hatred and envy. In an interview with VladTv, The Baton Rouge rapper stated:

Since his passing, there have been some people that feel like he caused his own death. They feel like through his portrait of drugs and violence in his music, he attracted the energy that he put out. But hip-hop is a reflection. And as human beings, we are all products of our environments. So if drugs and violence is what he witnessed growing up on Pennsylvania Avenue, how could he not rap about it? What was more profound, though, then the lyrics in his music was the devotion in his actions.

In addition to hosting the charity event last weekend, Scoota once spoke to children at Samuel Coleridge Elementary School and even joined Councilman Nick Mosby last year on his #EyeAmBaltimore Tour, speaking with kids at various high schools about the importance of education. Scoota knew there was more to life than the impoverishment he faced growing up. He left an indelible mark on Baltimore's youth. Although a lot of his music wasn't age-appropriate for them, outside of the simplistic melodies, they could relate to what he represented--inspiration. After his death, kids on Pennsylvania Ave were negotiating with a police officer to play his music: "We loved Lor Scoota and he died."

In the face of tragedy and the lingering uncertainty involving the Freddie Gray case, Bmore stood in solidarity for the late rapper's vigil on Monday night. Hundreds were in attendance, with one attendee making comparison to the gathering at Biggie Small's funeral in Brooklyn, NY, back in '97.

Lor Scoota had an innate star quality. When I watched him in the video for "Love You No More," I saw a presence on-screen that would've naturally transitioned into films. Like Tupac Shakur, Mos Def, Will Smith and Queen Latifah, I believe Scoota had the ability to transcend hip-hop.

I hope Scoota's in a better place now. I hope that he's amongst fellow Baltimore musical alum: G-Rock, Smash, Billie Holiday, Eubie Blake and Cab Calloway. Lor Scoota's record label, YBS, is an acronym for "Young Ballers Shining." Maybe Scoota's star was too bright to shine in Baltimore. Maybe even too bright for the world. Astronomically speaking, the more massive the star, the faster it burns up its fuel supply, and the shorter its life. But a star with a mass like the Sun can continue fusing hydrogen for about 10 billion years. Now Lor Scoota can shine indefinitely.