Somewhere tonight St. Peter is looking at John Zacherle's resume and saying, "Huh? You did what?"

You can see St. Peter's point.

Zacherle, who died Thursday in New York at the age of 98, landed a gig in October of 1957 as the campy, goofy host of really bad late-night horror movies on WCAU television in Philadelphia. 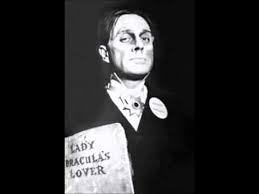 For reasons Zacherle would later cheerfully admit escaped him, he was able to spin that persona into a career. He moved to New York and did almost a decade of television before moving to radio for another 14.

After that he became, well, Zacherle. Or, as it was sometimes spelled in New York, Zacherley.

A brand in the best sense of the word, he did conventions and he did cameos and he did a little more radio. Generations rolled on, but the fans remained, because it seems like every kid who grew grew up in New York in the late '50s and early '60s remembered him.

That includes a lot of people who didn't actually watch every TV show, because most of the movies he presented truly were dreadful. It was Zacherle's droll, morbid commentary that was selling the airtime.

The fact the movies were terrible became part of the joke. Everything about Zacherle's TV act was a goof, and he made it work because he knew it. He perfected the deceptively tricky art of getting everyone who was watching to feel like they were all laughing together.

Some of the crazy, silly stuff we do and say as kids gets embarrassing as time passes. Some of it gets cool. Zach was cool, which made it appropriate he was also known as The Cool Ghoul, a name hung on him by his pal Dick Clark back in Philadelphia.

His friendship with Dick also led to one of the first hints that this he might be able to parlay this Zacherle thing into more than a small late-night cult.

He signed to Cameo Records and cut a single called "Dinner With Drac," which compiled some of the rhymes he dropped into the middle of those horror movies. 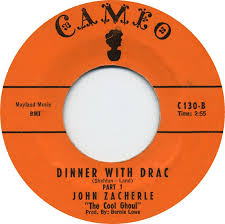 It wasn't Shakespeare. It did honor the meter and spirit of the limerick.

It became a national top-10 hit, which was almost as bizarre as what happened a couple of years later on WABC-TV.

In one episode he staged an opera called Il Draculare, for which he was backed by the WABC Orchestra, a full ensemble of classically trained musicians who very likely never figured they'd be accompanying a man wearing a long black coat and a fiendish grin.

He also had a short run in the 1960s at WNJU-TV with a show called Disco-O-Teen, where the Zacherle character interacted with legitimate rock 'n' roll bands like the Lovin Spoonful and the Doors.

Zacherle did have one secret weapon through all this. He was talented. He knew the right balance for his television character, and when he modified the character for radio at WNEW-FM and WPLJ, he had both the voice and the timing.

In an interview several years ago, Zacherle readily admitted that he had no idea why this one random character he played in the experimental years of television caught so many imaginations.

He wasn't complaining. This was, after all, a guy who born while World War I was still being fought, served in World War II and then decided to try a career in theater.

That's a wild card for almost everyone, and it's 100% believable that he had no idea what would follow. No idea he would come to represent innocence, fun and, okay, some early stirrings of rebellion and attitude in a whole generation of New York youth.

But that's how it came down, and if St. Peter doesn't believe it, he can just roll the tape.