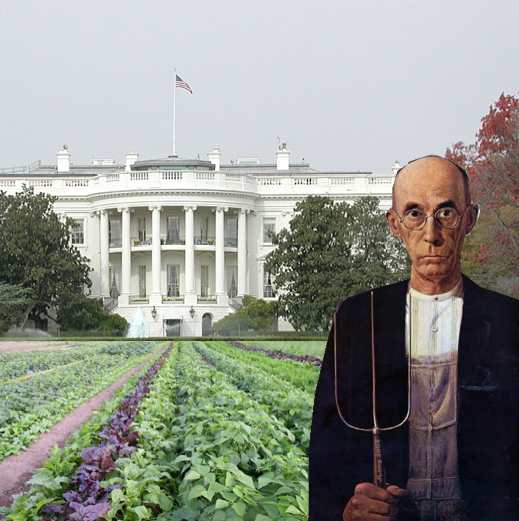 The American public's demands for a radical new direction in the country's food and farm policy are beginning to gain some rather serious volume. It's a new year, a new administration is assembling, and the unrequited expectations of the last eight years are being vocalized: in key newspapers, on the blogosphere, among community organizers, and at dining tables around the country. We are experiencing a shift in the global gestalt, not only around the possibility and need for change, but in the places where such reforms have to start.

People want our unhealthy food and agriculture system made healthy. And it doesn't look like they'll be giving up any time soon.

At the Slow Food Nation in San Francisco in 2008, the Declaration for Healthy Food and Agriculture was unveiled, an eloquent call and 12-point checklist for a 21st century approach to food and farm policy. Thousands of people signed on immediately. And the declaration is gathering steam as it makes its way around the country.

In December, the Iowa-based group Food Democracy Now drafted a letter to the Obama Transition Team recommending potential candidates for the vacant Secretary of Agriculture position. Within a week, that letter gained over 60,000 signatures. A core group of sustainable food advocates talked with the Obama Transition Team to express the severity and urgency of a potential food system meltdown. But it remains to be seen if that testimony will actually be taken seriously by the new administration, with former Iowa governor Tom Vilsack as USDA chief. In the mean time, Kim Severson of the New York Times wrote a full-page article about the Food Democracy Now effort, which is well worth the read. Will the Obama's till up a few acres of the White House's precious lawn to plant a vegetable garden? It doesn't seem that much to ask.

Journalist Christopher Cook -- in a recent piece for the Christian Science Monitor -- put forward a "nine-point platform for food reform." He calls for the new administration to include food and agriculture projects in the forthcoming stimulus package, asking for "change we can eat."

Just this week, Wes Jackson of the Land Institute in Salina, Kansas, and our sustainability laureate, Wendell Berry, published an opinion piece in the New York Times calling for a Fifty-year Farm Bill. The United States, Jackson and Berry argue, must quickly move from highly erosive and toxic monocultures of corn and soybeans that blanket the country, to a more perennial landscape. That is, farming systems that maximize soil and water protection by providing as much permanent ground cover as possible. Jackson and Berry call for a two-pronged approach: transitioning back to hay, pasture, and grazing rotations that allow the "farming to fit the land"; and a revolution in perennial grains that could reduce the need for plowing, toxic pesticides, and heavy doses of fertilizers.

Because the Farm Bill is renewed every five to seven years, and because its billions of dollars in farm owner incentives actually determine many of the rules of our modern food system, federal policy can become both a driver and road map for that long term goal. In fact, using a fifty year Farm Bill Road plan, we could begin to plot out a half century of sustainable food policy. Instead of "Getting Big or Getting Out,"--the cold war-era blueprint for the past fifty years of agribusiness domination--we could "Go Perennial by the Next Centennial."

My hope is that this surge in popular understanding of the importance of our food system to the very survivability of our society is not merely swept up in the winds of change blowing across Washington at this very moment. Rather, I hope these efforts are only the seeds of something much larger, a movement that will grow to millions of concerned citizens. Millions of citizens who may be willing to make small contributions to an organization dedicated to demonstrating the power of a new movement--civic agriculture. Maybe then the needs of the people and the land and the future will begin to take precedence over the greed and ambition of corporate agribusinesses now standing in the way of healthy food and agriculture.

These times are ripe for change.