I am now exclusively occupied with the problem of gravitation, and hope, with the help of a local mathematician friend, to overcome all the difficulties. One thing is certain, however, that never in my life have I been quite so tormented. A great respect for mathematics has been instilled within me, the subtler aspects of which, in my stupidity, I regarded until now as pure luxury. -- Albert Einstein 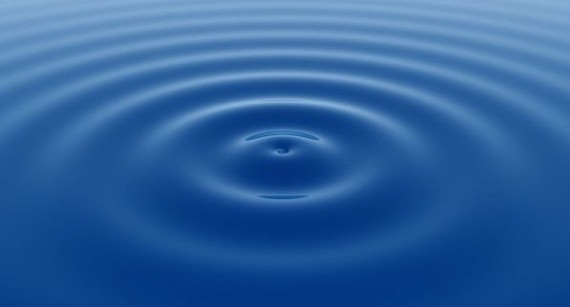 The year was 1906. The previous year, Albert Einstein, a lowly examiner in the patent office of Bern, Switzerland, had laid five golden eggs in the form of scientific papers. Four of them revolutionized physics, catapulting Einstein, almost overnight, from obscurity into the first rank of physicists.

Einstein's gift, observed science historian Jacob Bronowski, was the ability to ask "immensely simple questions": questions that a child could ask but whose answers rock our understanding of reality.

One such question Einstein posited while yet in his teens: How would the world appear were I riding on a beam of light?

The question lingered and niggled at him on his tram rides to and from the patent office. Daily he passed Bern's famous clock tower. "How would the clock appear," he wondered, "if the tram receded from it at the speed of light?"

The answer -- the clock would appear frozen in time -- led to the special theory of relativity, casting "a wrinkle in time." Time does not flow the same for all observers. Clocks tick differently for the traveler and the stay-at-home.

But in 1906, Einstein was working on a problem so daunting that, by comparison, special relativity was "child's play."

Inspiration came easily enough. Einstein's "happiest thought" emerged as he mentally replayed Galileo's experiments involving freely falling objects. Galileo had found, contrary to Aristotle, that dropped objects rush toward earth at the same rate, independent of their masses. They do so, we now know, because of the exact equivalence of inertial mass and gravitational mass.

Not content to blindly accept this improbable coincidence, Einstein pondered the why. He concluded, "For an observer falling freely from the roof of a house there exists -- at least in his immediate surroundings -- no gravitational field." Acceleration can either create artificial gravity, or in free-fall, abolish gravity. Thus, gravitation and acceleration must somehow be equivalent.

Turning this insight into the general theory of relativity (GR) consumed Einstein for ten exhausting years, during which he endured divorce, world war, and near-fatal illness. Had Einstein not discovered special relativity, almost certainly others would have. GR, however, demanded what Einstein uniquely possessed: "the most amazing combination of philosophical penetration, physical intuition, and mathematical skill." Awed, Einstein's fellow physicist Max Born called GR both a "great work of art" and "the greatest feat of human thinking about nature."

Completed in 1915, GR is, at essence, a revised theory of gravitation. Newton, the progenitor of gravitational theory, was in truth beset by grave doubts:

It is inconceivable that inanimate brute Matter should without the Mediation
of something else which is not material, operate upon, and affect other
Matter without mutual Contact. Gravity . . . is . . . so great an Absurdity
that I believe no Man who has in philosophical Matters a competent
Facility of thinking can ever fall into it.

In Einstein's modern turn of phrase, what haunted Newton was "spooky
action at a distance." How can two celestial bodies affect one another instantly
at great distance if nothing fills the intervening void?

GR avoids "spooky action" in a spine-tingling way. It states that massive objects -- like stars -- warp space and time, and that the motion of an object in warped spacetime masquerades as a gravitational influence.

In 1916 Einstein adapted his theory to predict the existence of gravity waves. Such waves -- generated by binary stars or other massive objects in tight orbits about one another -- should ripple throughout spacetime at the speed of light.

GR also lent credence to ideas that Einstein initially found distasteful: black holes and Big-Bang cosmology. Of the former Einstein grumbled that black holes might be invisible, but to him they had "smell" and they just didn't "smell right."

By 1919 British astronomer Arthur Eddington had presented the first experimental confirmation of GR: the gravitational lensing of light as it passes close to the sun. In the years since, GR's outrageous predictions -- black holes and Big-Bang cosmology -- have become mainstream physics. Initially controversial, Big-Bang cosmology was essentially settled in the 1965 discovery of microwave background radiation -- telltale whispers of the Big Bang.

Still, no one had confirmed gravitational waves -- until now.

The problem with gravity is that it's exceedingly weak, at least relative to the other "forces" of nature. Compound that with the distance that gravitational waves must travel from distant galaxies to jiggle our neighborhood. Such waves would be almost vanishingly small.

Yet the question intrigued the National Science Foundation (NSF) enough to invest more than one-half billion dollars -- its largest grant ever -- in LIGO, the Laser Interferometer Gravitational-Wave Observatory. Two LIGO detectors were built -- one in Livingston, Louisiana, the other in Hanford, Washington. For nearly a decade they sat all dressed up but too insensitive to detect any gravity waves. 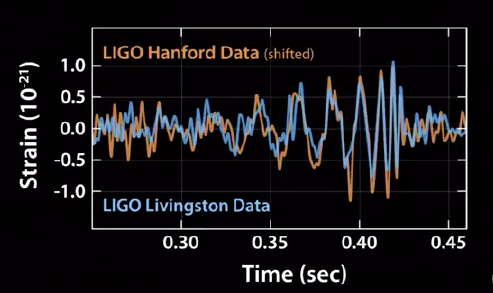 LIGO got a new lease on life following the completion of an upgrade in 2015. Months later, on September 14, 2015, NSF's quixotic search paid off. America's two LIGO detectors each sniffed an exceedingly rare gravitational wave lasting less than a quarter second. Not wishing to cry "wolf," the LIGO scientific team, which involves hundreds of collaborators, sat mum until certain of the monumental discovery. On February 12, 2016, they went public in Physical Review Letters. Here's the gist:

The near-simultaneous gravitational pulses you above see are consistent with the merger of two black holes roughly 1.3 billion lightyears distant from earth, the larger black hole with a mass 36 times that of the sun and the smaller at 29 solar masses. Dancing in an orbit so tight they eventually whip around at 75 revolutions per second, the black holes radiate enormous quantities of gravitational energy as they merge into one. A gravitational "chirp" signals the climax of their union.

"The description of this observation is beautifully described in the Einstein theory of general relativity formulated 100 years ago," glowed MIT professor Rainer Weiss, one of the first to propose LIGO.

"This is the first direct detection of gravitational waves and the first observation of a binary black hole merger," concludes the paper that announced the twin discoveries.

"No one who has really grasped it can escape the magic of this [new] theory," Einstein effused at the birth of GR. Magic it is.

Spacetime is not what Newton supposed: the Euclidean backdrop to events, like the stage of a play. Spacetime is participatory. The stage and the players interact; the spider and its web are partners. The spider's motions jostle and distort the web, even as the web's fabric makes possible the spider's locomotion. General relativity constructs a web-like cosmos. Space, time, and all events that occur in spacetime are integrally interconnected. Stars, black holes, planets, and perhaps even humans: all perturb the spacetime fabric, sending ripples throughout the cosmic pond.

And now we've been bobbed by those ripples.

(Parts of this essay were adapted from Chapter 7 of Reason and Wonder.)