This is the last week to see, smell and savor Fear Eats the Soul, Rirkrit Tirivanija's latest exhibition at Gavin Brown's enterprise in the West Village. Like most of the artist's work, the show is Duchampian in spirit. Installations, including a soup kitchen and a t-shirt factory, rely on viewer participation, and the gallery space is open to the public around the clock, leaving ample opportunity for interaction.

Born in Buenos Aires and based in Chiang Mai, Rirkrit seems to travel incessantly. While in New York he stays in the same East Village apartment he replicated over a decade ago in Untitled, 1999, (tomorrow can shut up and Go away), an open-all-hours exhibit at Gavin Brown's enterprise's former space on West 15th street.

Here's a few notes from a short conversation:

RR: When I make these paintings, it's like a stop sign. It's telling you something. You can pay attention to it. You probably don't pay enough attention. That's why it should be a sign. We need to stop and think about what we are doing.

RA: Do you have a favorite tee?

Soup is served and t-shirts are printed Thursday-Saturday. The show is extended an extra week, through April 23rd. You can go there now. 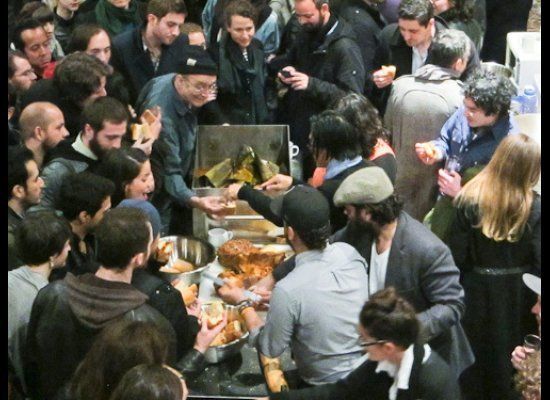