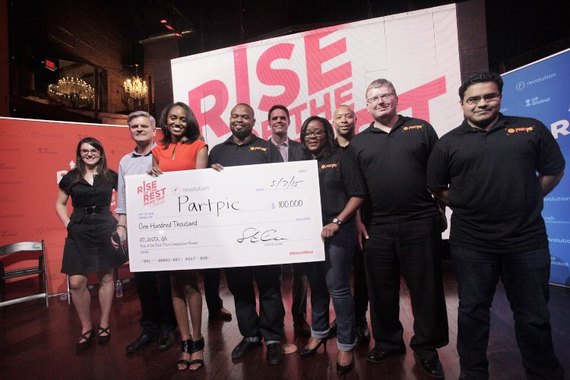 At its best, our age is an age of searchers and discoverers, and at its worst, an age that has domesticated despair and learned to live with it happily.
-Flannery O'Connor

Day Four of Rise of the Rest brought me home to Atlanta. I was born and grew up here, and it was also here that I started Village Capital. I'll share the bad news first:

To be honest, Atlanta has, in my experience, never been the easiest place to be an entrepreneur. Part of this is cultural--most people in Atlanta have experienced success through the wonderful Fortune 500 companies in the city or through the real estate market that is a pillar of the economy over the last 50 years--but people in both categories tend to be risk-averse with regards to entrepreneurship.

And part of Atlanta's failure to embrace investment in entrepreneurship is timing--local venture capital funds missed the high-water-mark of the late 90s tech boom and got beaten by the dot-com bubble bursting; the next wave of venture capital got hit hard by 2008's recession. When it comes to the next wave of innovation, to paraphrase the great Georgia writer Flannery O'Connor, it seemed like Atlanta had domesticated despair and learned to live with it happily.

Yet today, Steve Case summed up the hope I felt today for the future of entrepreneurship in Atlanta when he said, "most people look at a startup and think of all the reasons it will fail. When we are at our best, we look at a startup and try and find reasons it will succeed." Atlanta, in the past, has been quicker than most communities to find reasons that startups will fail--but today, I saw two encouraging signs that the Atlanta entrepreneurship community is on the way to success.

The first promising sign is through successful entrepreneurs paying it forward, building a strong foundation for a community. We started the day at the Atlanta Tech Village, where David Cummings, a local entrepreneur who built and sold the company Pardot, has bought a foreclosed office building and on top of the 2008 real estate crash has created a community of over 200 startups.

On the south side of town, successful entrepreneur Rodney Sampson has built the Opportunity Hub, a community of innovators primarily from under-represented backgrounds, ensuring that Atlanta's entrepreneurial success includes everyone. Rodney and his partner Earl have trained, housed or invested in over 100 entrepreneurs, drawing from local universities (Georgia Tech, Georgia State, Morehouse) and the community for the next generation of ideas. Both Rodney and David could be doing really anything with their time and money, but they are grinding it out building the next generation of Atlanta's success.

The second promising sign I saw was in who is investing in startups in Atlanta. Perhaps the highlight of the day was a tour of Ponce City Market, a groundbreaking real estate development by local firm Jamestown. Jim Irwin, the lead on the project, explained, "we want to be where startups go to grow." We saw Cardlytics and MailChimp, two companies that are employing hundreds of people each and driving Atlanta's next generation of great companies, occupy entire floors in a beautiful renovated old Sears building. For a real estate firm to have the vision of the kinds of spaces where entrepreneurs want to live and work is something I've never seen before in Atlanta--and given the fact that good real estate developers borrow, and great ones steal, I look forward to much more innovation locally.

Corporations are also much more active than I've ever seen them. We at Village Capital have invested in a great local company called Rimidi, which helps diabetes patients track and manage their health behaviors. Lucie Ide, an MD/PhD who is the CEO, recently raised a major round of investment from Cox Enterprises, historically an old-school media company who has seriously ramped up their investments. Lucie said that Cox's due diligence was the toughest she had faced, but also among the fastest--historically unprecedented among corporations. Cox is contributing significant dollars as well as remarkable insights on how consumers live their daily lives to Rimidi as they try and provide quality access to care for all.

Steve Case spoke at lunch at TechSqATL about the "Third Wave" of the Internet. The "First Wave", from 1985-2000, was building the Internet (what AOL and others did); the "Second Wave", from 2000-2015, has been helping people communicate and find information (Google, Facebook, Twitter, etc.) and the "Third Wave", which will define the next 15 years, is helping the Internet integrate into everyday life. Atlanta is especially well-positioned, Steve said, to take advantage of the Third Wave due to the corporate presence.

And I saw evidence of promise today. During that lunch, Duncan O'Brien, the Senior Vice President of Corporate Strategy and Investments at Cox Enterprises, was thrilled that Cox could engage with a startup like Rimidi that could help them understand a specific aspect of the "Third Wave"--how technology was helping move health care from the hospital to the home. Cox's investment in Rimidi makes me more confident that Cox can take advantage of the Third Wave--and so can Atlanta.

I know that you can never be objective when writing about your own home, but Atlanta showed me today that a community has the entrepreneurial ecosystem it chooses. I've seen a huge upshift in attitude from the competitive, noisy, and largely negative environment five years ago to the collaborative one that believes in the possibility today. There are miles to go, Atlanta is starting to look at startups and see why they might succeed. I'm looking forward to the next wave of searchers and discoverers.

Ross Baird is the founder and CEO of Village Capital, which finds, trains and invests in early-stage entrepreneurs solving real-world problems.