Money talks. That's why when the U.S. Department of the Interior wanted to highlight the dangers of rising sea levels to its National Park assets--some of which are true national treasures--it decided to put an eye-popping price tag on the projected losses.

Back in June, the National Park Service, in partnership with the Program for the Study of Developed Shorelines at Western Carolina University, put out a Coastal Assets Report listing thousands of National Park properties that would be damaged by a one meter rise in sea level by the end of this century and calculating its current replacement value. The grand total for the 10,000 assets in harm's way: $40 billion.

The NPS left nothing out as it surveyed not only national parks, few of which are actually on the seashore, but also national historic sites and national recreation areas, many of which are beaches. This phase of the study covered just 40 of a total of 118 "coastal units" that the NPS is responsible for, so the grand total could easily double or almost triple if a full survey were completed. (A second study of an additional 30 parks is currently underway.)

One case in point: the Statue of Liberty National Monument. Hurricane Sandy gave the NPS a sobering preview of what a sea level rise could do to Liberty Island. Everything on the island is classified as "high exposure," and the replacement cost--even if one assumes the statue itself is priceless--is more than $1.5 billion. 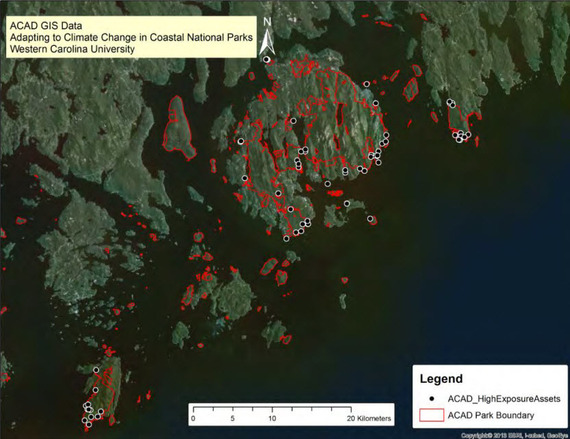 And on the West Coast, the Golden Gate National Recreation Area in and around San Francisco has 114 high exposure assets and 935 limited exposure assets. The replacement cost: a stunning $5 billion. Everything from sheds, parking lots, gas stations, and even the Alcatraz bookstore is taken into account.

Although the report is sounding an alarm about problems that may emerge decades in the future, the NPS is plenty worried today. "Numerous coastal units, particularly low-lying barrier parks, are already dealing with sea-level rise threats to resources and assets, particularly roads, buildings, and parking lots. Much of this infrastructure is essential to the day-to-day function of the units, including bridges, water systems, and tunnels," says the report. New Yorkers, for example, sometimes wonder if the entire Fire Island National Seashore, a very thin island of dunes along Long Island's south shore, may someday simply vanish, making the $98 million replacement value for park assets moot. And many lighthouses and forts from Maine to Florida to California are already under threat of damage from undermining.

The NPS report doesn't speak to solutions for sea level rises. That's not a problem it is meant to solve. It's simply expressing concern for the things it exists to protect. And at these prices, they are national treasures indeed.