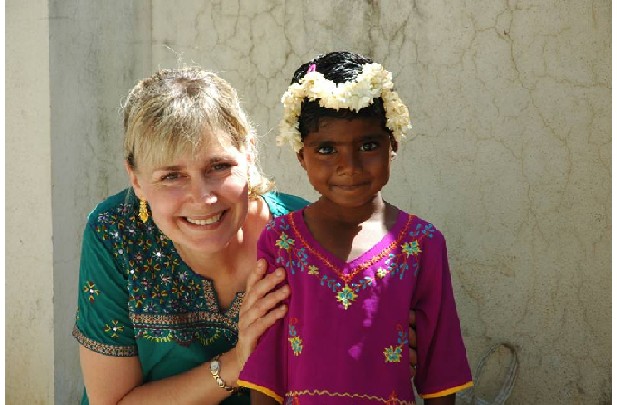 Becky Douglas skillfully works the room at a posh gallery fundraiser for Rising Star Outreach, the organization she founded in India. Holding up a brightly colored painting of a boy riding a giraffe, she asks, "Isn't it remarkable? The artist is missing most of his fingers."

Seeing the stunned look on the guest's face, she explains, "All of these were painted by artists in the leprosy colonies. Most are parents of the children in our school."

On surface, the mother of 10 (seven biological; three adopted) who lived in suburban Atlanta before her move to New York, seemed an unlikely leader of an organization benefiting children halfway around the world. But RSO, like many worthy nonprofits, came about following a tragedy -- the suicide of Douglas' daughter, Amber.

Sorting through her things, Douglas came across repeated donations to an orphanage in India, and on an impulse, the grief-stricken mother booked a flight. Within hours, she came face to face with Hansen's Disease, or leprosy, a scourge she thought had been eradicated.

"I tried to avoid looking directly at the beggars until one woman flung herself on the hood of the cab," she said. "When we made eye contact, I realized she was a mother just like me."

Back in Atlanta, Douglas had recurring nightmares about the children who begged beside their parents. Though disease-free, they were equally shunned.

Determined to honor Amber's cause, she asked three close friends to her home for lunch. By the time the women had cleared the table, RSO was born. "We had no idea how to raise money, but we knew we wanted to help educate these children to be self-supporting so they would be the last generation forced to beg in the streets for subsistence."

Douglas's first endeavor was to establish a children's home for 27 three-, four- and five-year olds from the leprosy colonies. The following year, they added 32 more children. By the time RSO was recognized by the Indian government two years later, the waiting list swelled to 300. Douglas immediately set her sights on a permanent facility.

In 2007, RSO broke ground for a compound on 13.5 acres in Thottanaval, near city of Chengelpet. Today, the school houses a population of 180 students in two children's homes and has an elementary school, volunteer dormitory. In 2010 Douglas cut the ribbons to India's first high school for the children of leprosy-affected colonists.

Although her initial goal was to educate the children, Douglas realized RSO must also help their parents. The perfect opportunity arose when she met Padma Venkataraman, daughter of the former president of India, who had begun granting micro-loans to colonists. The women joined forces and adopted Venkataraman's philosophy that anything given away is unappreciated.

Douglas explains: "People with leprosy have been beggars for hundreds of years and don't picture themselves as earning money. The first time we visited, colonists rushed out asking, 'What did you bring us?' Learning that the 'gift' was a plan to become self-supporting, only a handful of women remained."

The micro-loan program is based on a simple concept. One woman in each colony monitors recipients. Once loans are granted, no one is eligible for a new loan until everyone in the group repays their debts, plus interest, which is used to fund additional loans.

The loans are minuscule -- $15 to $20 -- but the successes are life-changing. One woman borrowed enough for a milking cow. With the money she earned from selling milk, she repaid the loan and bought a bull, hoping to raise their offspring to sell to other colonists.

Her husband borrowed enough to purchase a tea pot and some cups. When his debt was repaid, he borrowed $8 for a bicycle so he could deliver tea to workers in the fields. Today, he owns multiple bikes and hires others.

Another major problem was health care. Even though leprosy is curable with drugs provided free by the World Health Organization, many clinics in India still refuse treatment to colonists. Securing consistent medical care for patients susceptible to disease and injury became RSO's next goal. The solution: mobile medical units that bring the care into the colonies. "Patients who pay two rupies (about a nickel) to see the doctor now adhere strictly to the instructions they ignored when medical care was provided for free," Douglas said.

It takes a village
Despite a competent full-time staff in India, volunteers are the lifeblood of RSO. They sign on from three to six weeks and travel at their own expense. Some teach life skills, English, computing or dance. Others build toilets or sunshades. Still others tend the wounds of the leprosy-afflicted in the colonies and advise micro-loan recipients (none of the students at RSO or the colonists they work with are contagious). Many volunteers return year after year.

Supporters include the J. Willard and Alice S. Marriott Foundation, the Peery Foundation and American Idol runner up, David Archuleta, who urges his fans to contribute.

"It's very easy to be overwhelmed by all the world's problems. I've learned that one person who is willing to reach out can truly make a huge difference," Douglas said.

"Volunteering at RSO adds a new dimension to experiencing India not found at the Taj Mahal."