The cost of a college education is rising, but the wages that pay for them aren't.

Over the last 20 years, while pay for the average American worker stagnated, college tuitions have risen drastically, according to an article by CNN Money. In fact, the average cost of tuition at a public college had risen to $6,500 by 2008, from just $2,800 in 1988.

Wages over the same time period have actually declined, once adjusted for inflation. For perspective, if pay rates had increased at the same rate that tuition has, the average American would now earn $77,000 a year in 2008, according to CNN Money. In reality, the average American earns closer to $33,000, or $400 less than 20 years earlier when accounting for inflation.

Pay of the average worker has not only taken a different course from tuition, but from economic productivity, too, according to a study this year by the Economic Policy Institute. While U.S. productivity increased by 80 percent between 1979 and 2009, the hourly wage of the median worker went up by 10.1 percent. The country's high unemployment rate, currently at 9.1 percent, has only intensified that downward pressure on wages.

And then there's federal student financial aid programs. Since 1992, the maximum amount of financial aid a student could receive from the federal government for a four-year degree has remained at $23,000, in spite of inflation and rising tuition costs. Consequently, two-thirds of students graduate in debt, and the average student owes $23,186 on average, according to figures from FinAid.org cited by CNN Money.

Below is a chart showing the rising tuitions rate of colleges and the stagnating median income of Americans provided by CNN Money. Click chart for more info: 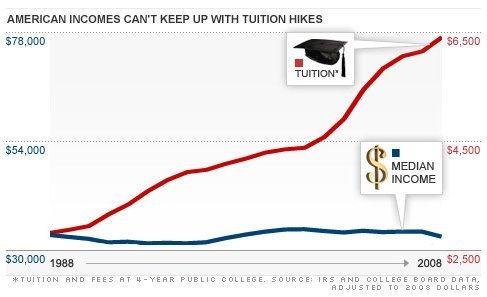