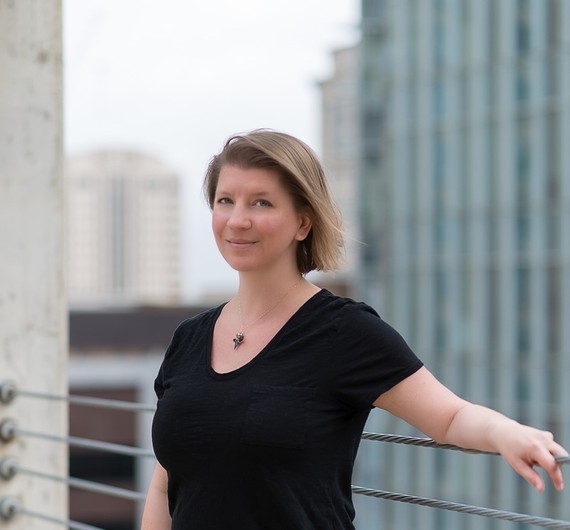 As she approached her 40s, Kayt Sukel (above) suffered a midlife crisis... in reverse. Instead of binging on wild adventures--bungee jumping, big-game hunting, flings with Bieber-aged men-- Kayt became a play-it-safe suburbanite, which is not how she sees herself. In her youth, she was the kid who'd climb the highest tree and accept the biggest dare. As an adult, she swam with sharks and trekked through Europe, Africa, and the Middle East. For Dirty Minds, her book on sex and neurobiology, she experienced an orgasm while undergoing a magnetic resonance imaging scan (no, she doesn't have a radiology fetish-- she volunteered for a study at Rutgers University).

Then came middle age. Kayt endured a difficult divorce, tackled new responsibilities as a single mom, and found less time for excitement. She became, she says, "more of a spectator than a participant in life." And it bothered her.

So Kayt, being a top-notch science writer, conducted research on her fading fearlessness. She investigated the four key factors that affect our willingness to take risks, from gender to genetics (a specific gene has been linked to impulsive behavior and novelty-seeking), from age to our brains (as we get older, our frontal cortexes--the part of the brain that controls behavior--become more mature, which can inhibit risk-taking). Kayt shares these findings along with her personal journey in a fascinating new book, The Art of Risk. I met Kayt in 2011 at a writer's conference in Dublin and I recently asked her to share her biggest, most beneficial lessons.

Lesson #1: Small risks are as important as big risks.
We often think risk involves frightening experiences, like skydiving or attending a Trump rally. But even tiny risks can be valuable. "I try not to immediately say no to new experiences- whether it's tasting some weird food or trying Sudoku," says Kayt. "These are all little things but they can keep your brain supple and help you learn--and bring a big sense of accomplishment and wonder."

Lesson #2: Successful risk takers are careful planners.
When Kayt interviewed big-time risk takers-- from a BASE jumper to a sex worker to an Army Special Forces operator--they all said the same thing: "I don't take risks." But when she suggested that parachuting from cliffs or making underwater incursions into enemy territory IS a bit risky, they'd say, "Well, okay, but I don't take unnecessary risks." And that's a key point: Successful risk takers are thoughtful and prepared, says Russ Poldrack, a researcher who studies decision making at the University of Texas at Austin. Conversely, dysfunctional risk takers only look at immediate outcomes. Think of it this way: Space travel is dangerous, but NASA plans for nearly every scenario. They don't impulsively shoot astronauts into space and say, "Wait--did someone pack the Tang?"

Lesson #3: Self-awareness leads to better decisions.
"Know your default response to risky situations," says Kayt. "Are you impulsive? Do you drag your feet? Are you anxious? Understand how factors like your social group, your stress level, and your emotions can influence the way you approach risk." Let's say you're an impulsive person and you're about to bet $50 on a horse named Gertrude (because it's the same name as your mother--wow!). Take a step back and ask, does this horse have other worthwhile attributes? Should I consider other horses? Or, if you know you're going to bet regardless, bet $5 instead of $50. "It's all about being thoughtful, reasoned, and aware," says Kayt. And it works: Business leaders who understand their own strengths and weaknesses better managed risk at work, a study of executive leaders found.

Lesson #4: Risk-taking adds zest to life.
We're all risk takers. It's what we do. "Few decisions come with any sort of guaranteed outcome," says Kayt. "There's risk involved in what you eat for breakfast and in accepting a marriage proposal. There's risk in going out into the world. And there's risk in staying home." Kayt has regained her risk-taking mojo (along with a new husband), but she's less interested in wild Thelma-and-Louise-style risks than in risks that bring her joy. "Safety is, well, safe," says Kayt, "but will it help me achieve the things I really want for my life?"