The cathedral in Sandomierz, Poland is marking the Catholic Church's International Day of Judaism in a very unusual way-- by displaying a painting of Jews killing Christian children that had previously been covered up for being too offensive.

JTA reported that "Mord Rytualny," or "Ritual Murder," will go on display Thursday, Jan. 17, the "Day of Jewish-Catholic Dialogue" that began in 1990 to "remember the Jewish roots of the Catholic faith." 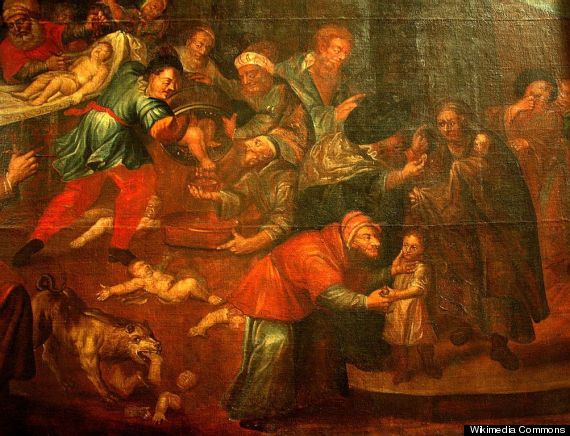 The painting is part of a series of works by de Prevot that depict the Martyrologium Romanum, which is the official martyrology of the Roman Catholich Church, explains a report by Joanna Tokarska-Bakir, a Ph.D at the Institute of Applied Social Sciences at the University of Warsaw, Poland.

Commissioned by the cathedral chapter in 1708, the gruesome works show children having their blood drained and bodies hacked to pieces.

The painting is currently mounted on a wall of the cathedral, but has been hidden from view since 2006 because of its offensive nature, reports the Times of Israel.

According to Polish daily newspaper Gazeta, "a plaque next to the painting will inform viewers that the Jews did not actually commit ritual murder because it is prohibited by their faith," reports JTA. The plaque was organized by the Polish Episcopal Conference's Committee for Dialogue with Judaism.

Torkarska-Bakir's report explains that the paintings detail specific Sandomierz blood-libel myths. "Blood-libel," also known as "ritual murder," refers to "a centuries-old false allegation that Jews murder Christians – especially Christian children – to use their blood for ritual purposes, such as an ingredient in the baking of Passover matzah," explains the ADL.

A second series of paintings by Charles de Prevot along similar themes exists in St. Paul's parish church, a mere kilometer away from the Sandomierz cathedral. A work that can be described as even more explicit than "Ritual Murder" depicts a Christian child being strangled and drained of blood.

1 / 8
Jewish Farm School
The <a href="http://www.jewishfarmschool.org" target="_hplink">Jewish Farm School</a> is dedicated to teaching about contemporary food and environmental issues through innovative trainings and skill-based Jewish agricultural education. We are driven by traditions of using food and agriculture as tools for social justice and spiritual mindfulness. Through our programs, we address the injustices embedded in today's mainstream food systems and work to create greater access to sustainably grown foods, produced from a consciousness of both ecological and social well being.
Jewish Farm School