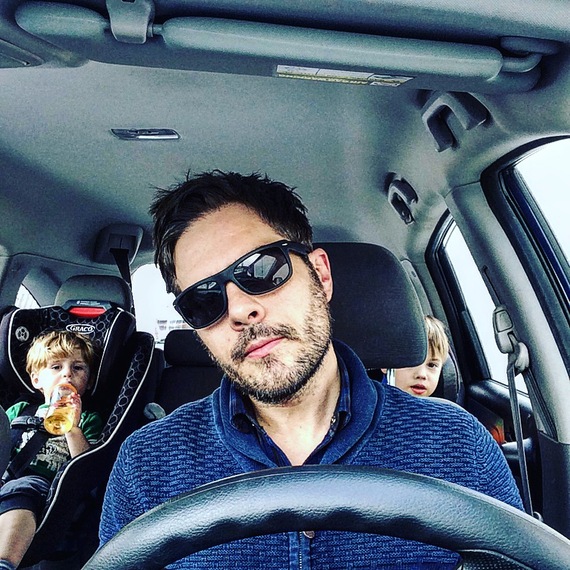 I hand off the kids to her with the regular goodbyes.

Henry kisses me on the lips and smiles and waves his hands around because he's high on the cookie he was just eating in my Honda not five minutes ago. Violet is already in the backseat, clicking in. She's far enough away that she doesn't want to come back up for a kiss. I get it. I smile at her and she smiles and looks out her window at the summer bashing down all over this gas station parking lot.

Charlie never stops smiling at me. He says his favorite word. "Bye." He says this gently, with soul and meaning, and it dawns on me that he knows the drill now. He knows that him sitting there in his mom's car seat but looking at my face means goodbye.

Her van doors close on an automatic hinge as if they've been pre-programmed to close the curtain on this scene for way longer than I could ever even know. There is a latching sound and then then the slow smooth slide of the door returning to it's natural state. It's so f*cking mechanical that it kills me.

The last sound I hear is the pop of her locks as she sets them on her own from behind her dash.

She rolls the window down then and Henry is back and he's still smiling at me as Charlie waves the last gulp of milk in his bottle at me from across the dark inside.

We part ways under the afternoon sun and I wonder if anyone here in this lot notices us at all. I wonder if anyone pumping their gas over there might have just been staring at us and clocking all this goodbye/tradeoff/little modern divorce performance art Fringe Festival pop-up f*cking play we've been putting on here for free over by the tire air hose.

Probably no one has. Convenience store people this time of day have had it with the world. They're sloshing gas to get home. They're moving across the lot, moving from heat to the doors of salvation, to the AC and piped in modern rock and the over-fat cans of Mountain Dew just staring out the cooler glass like evening dogs panting down the front window, waiting for the return of their humans.

We separate. We come together and we separate, wholly and completely, all the time now. In the first few moments of our weekly reunion I am a man on fire, my heart rising up out of my swamps and dancing across my land with the hugs and the kisses and the greetings and the picture Henry drew for me or the stuffed animal Violet just got and needs to show me. Then we live some life. We eat, we go to the park or to the store, we get tired, we laugh, we lay close to each other and we yell or fight or dance depending on the passing moment, depending on the full moon or not.

By the fourth hour of the fourth day I'm exhausted. And so are they, I guess. We have settled into our groove in order for us to rip it the f*ck apart. We have grown slightly more familiar with each other just so we can walk away again.

I smoke cigs on the back porch to the sound of them chasing each other around back in the house.

I tell myself that I'm being watched/I tell myself that the universe has cameras all over my ass. I imagine me being studied by some kind of energy rippling across outer space and it's the kind of energy with enough pull to make shit happen for me but the truth is, I don't even know what I'm hoping for, what I'm thinking could happen. I'm already happening, man. We all are. It's all happening right now, right here/right now even as I blow Marlboro Light smoke at the afternoon bees and f*ck 'em up into toxic holding patterns for a second or two.

From above us, with good hi-def cameras attached to strong drones, a smart documentary maker with a badass budget could capture something wild and sad and wonderfully blue. The right person with the right eye could make something good out of all this standard heartbreak, I think. I tell myself shit like that all the time, try to live my days through the $50,000 lens of someone else's flick, someone else's masterpiece.

"Bye." Charlie might still be saying that to me, he might not; there's no way for me to know.

I hang the right out of the parking lot and head up the valley directly away from them heading back down it.

I hit the CD player and it was always my plan.

The slow-rising drone of the synth.

Jesus standing there in a whipping desert dawn sandstorm.

The gates of Heaven.

The majesty rarely pulled off, but pulled off here.

F*ck you if you don't get it. I can't be responsible for everything that you've missed.

I had 'Where the Streets Have No Name' ready to roll even before I dropped 'em off. Look, this is my documentary, man. I've been thinking this thing up for eons. I've been starring in this thing all my goddamn days. I know the music. I don't pay for shit. I piss all over your licensing and publishing.

I take U2 and I do what I want with them.

I light a smoke and stare at the sky as The Edge rises from the mist of his lonesome heath. I gun it by the farm that stinks like ass. I'm relieved to be free for a while but there's a high price to pay and that's guilt, baby. My lite sighs sound like chains clanking down off me but dude I can't win here.

Just as fast as I start pondering maybe going to the bar for an hour or two/maybe having a few beers/maybe watching some women with my do-nothing eyes/the guilt slams into the Honda and the airbags go off and I'm flying through the f*cking summer sky/cartwheeling down into the cornfields/windshield shattered in the middle of the road/I catch a sky fall glance at my hissing hot radiator rolling up on somebody's lawn as I slam into the ground with the force of a crashing jet/the whole thing so intense to look at from the cars back behind me on the road/the life I have been living up until now making way for a whole new chapter that includes me dying in some fifteenth-row-from-the-road row of sweet Pennsylvania corn.

I imagine the tiny highway cross they will leave roughly where I came through the windshield. I will stand there and watch people fly by on their way to work or to get home in time to watch the Penn State game kickoff or whatever. I will haunt that little cross.

It will be an amazing scene to catch on film if the documentary maker has half a brain to think of it. My ghost at my own highway cross, are you kidding me? That will get me laid at Sundance for like the next fifty Sundances.

I miss them so much in the moments I leave them that I end up dying in the middle of my own movie every single time.

My drama knows no end.

I even play 'Where the Streets Have No Name' just so I can feel the goosebumps on my neck even when I don't crash/which is every time so far, you know.

I want to hide

I wanna tear down the walls that hold me inside...

My heart is more than the sky.

My heart is the first moments of the tune Daddy keeps playing for you over and over again, you guys. In the car, looking at you in the rearview even when you are not there, I know you are damn well there.

Even as I hold my fist in the air in the moments before he starts to sing, signaling to you that it is coming, that the dust cloud disappears without a trace, and that I love you more than I can ever even begin to f*cking understand, I know you are there.

And that this movie is epic.

And that I'm sure that every word will make sense in time, that someday these things that I wrote will find the six eyes that I wrote them for.

This piece originally appeared on the writer's blog, Thunder Pie.

The Moment I Knew
More:
when men divorceParenting divorcegentlemenLove
Newsletter Sign Up
An essential daily guide to achieving the good life
Subscribe to our lifestyle email.
Successfully Subscribed!
Realness delivered to your inbox