Victoria Sobel was making her afternoon rounds of Zuccotti Park. Holding a laptop with a webcam pointed outward, Sobel stopped to talk with two construction workers eating lunch in the Lower Manhattan park. She asked them if they wanted to say anything to the 300 people currently watching her livestream channel.

The workers looked at Sobel with a certain enthusiastic expression -- an expression that may be unique to people who are suddenly aware that their faces are being broadcast to a large, unseen audience by a form of media that is basically free of censorship. Then one of the workers, a barrel-chested man in a hardhat, stared directly into the webcam.

"One percent, go to hell," he yelled.

Sobel is a volunteer member of the Occupy NYC livestream team and is convinced that the streaming online videos she produces are changing the media landscape.

"The livestream has no real filter on it," she told me. "It's really in opposition to a lot of the things that you see. The TV trucks out there with the news anchors -- it's a contrived way of providing the news. I feel very strongly about that. It's not news anymore, it's theatre."

But theatre, it turns out, is not just the purview of the mainstream media. Just a couple weeks ago another Occupy Wall Street protester, Thorin Caristo, started his own, independent livestream channel creating drama in the media camp.

"There was a lot of push back," Caristo said about the response he got from the protesters working on the original livestream. "Like, 'Whoa, you just started your own channel? We own the channel. We don't need another channel.'" 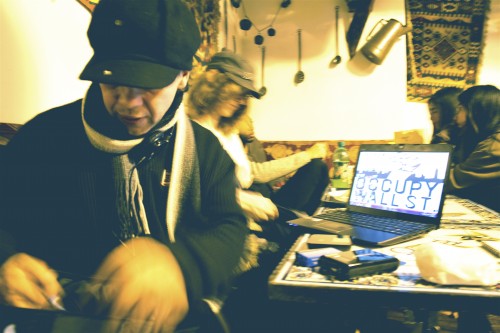 Caristo, a former organic farmer and antique dealer, is the latest media mogul in Zuccotti Park.  He named his livestream channel OccupyWallStNYC. Caristo insists that he didn't set out to compete with the other channel.

"I have no problem with competition," he said. "There's ABC, NBC coming to the camp. They avoid each other. They might even talk.  There shouldn't be a competition in media. There should be an openness. The more we're getting the voice out there, the better."

However, according to Sobel, Caristo's group is confusing the public as to who represents the actual movement. The issue is not so much Caristo's competing channel but the confusing name of his new channel. Caristo's channel is called OccupyWallStNYC while Sobel's channel is OccupyNYC.

"I have no problem with him owning that site," said Sobel.  "But I do have a really big problem with him calling it OccupyWallStNYC. And nowhere on the site does it say, 'This is so-and-so's personal site.'"

Sobel said her channel, OccupyNYC, is the "official" livestream channel, although there are no official leaders of the Occupy Wall Street movement. What she means is that her livestream channel is the only one sponsored and recognized by the Occupy Wall Street General Assembly, a regular meeting of protesters who vote on how to run the demonstrations.

"If I want to get a hamburger at McDonald's, I don't want to be tricked next door to going to McDonald's Inc," said Sobel. "That's what's going on here."

Tensions between the groups have ballooned so much that a week ago, Sobel's group left the media headquarters to set up a new livestream tent across the park.  A big, professionally printed sign hangs outside the new tent: "Occupy Wall Street Livestream and Video Production Media Tent."

While this may sound like a petty spat, the livestream name confusion may be a symptom of what the media team thinks is a larger issue now facing the Occupy movement: imposters.

"There are a million PayPal and WePay accounts being set up in our name that are not really ever going to reach us," said Sobel. "Because there a million people excerpting documents and saying, we are Occupy Wall Street send this money to Arizona."

There are not really a million PayPal and WePay accounts. However, the movement has spurred hundreds of competing Twitter accounts, Facebook groups, and WePay campaigns and sparked discussions among protesters about fraud, branding, and accountability. Take for example WePay, the Internet start-up that, like PayPal, allows individuals and groups to accept donations online. Type the word "occupy" into the search field on WePay's Donations page and you'll get 360 campaigns to choose from. According to the website, over $380,000 has been raised in the name of the Occupy movement.

"It's a hilarious meme now," said protester Andrew Neef. "You can use the word "occupy" and attach it to anything and go with it."  Neef came to New York City from Minnesota two weeks into the demonstration to help run the OccupyNYC livestream.

For Neef, the proliferation of Occupy media is a positive thing.

"I didn't think that this occupation would even last this long," he said.  "And it's just crazy that all these other situations that we never expected are popping up like these rogue entities that are building websites and media groups and stuff."

While the media camps battle over branding, Neef surveys the bigger picture -- through the lens of a webcam, of course.

"We're building this new world," he said. "It's a giant awesome social experiment, and you can check it out on livestream as it all goes down."

That is, you can check it out on two livestream channels as it all goes down.

New York Culture Media Politics News We Are The 47 Percent