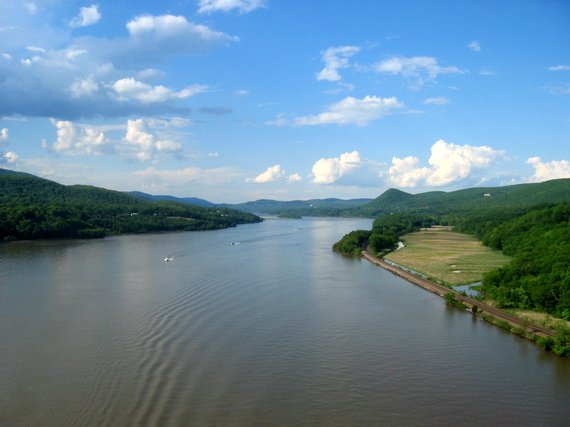 The Hudson River is under threat, again. Just when we thought we were in the clear - and that river towns up and down the Hudson Valley could enjoy scenic river views for restaurants, new housing, parks and other critical economic development - we're playing defense, again. Oil barges, nuclear plants and gas pipelines all now threaten the integrity of the river.

Remember that not too long ago the river was the dumping ground for toxics and municipal waste and that it's still recovering from General Electric's inexcusable release of PCBs into public waters. Had it not been for Hudson Valley voices - like the Riverkeeper and those who care about Clearwater (thank you, Pete Seeger) - we'd still have sludge and fecal matter floating by Manhattan.

Now it's a different kind of threat. While it's not sewage, it's equally serious, if not more so. It's oil, it's nuclear and it's gas. Ignore for a moment that these are all wrong directions for our energy transition - as non-renewable, toxic and expensive fuels - they're all threatening the critical health of the Hudson River.

First and foremost, oil is the most urgent threat. The U.S. Coast Guard is keen to let the oil industry now use the river for crude oil transport and build 43 berths in 10 locations along the Hudson River. The potential for oil spills is real and frightening (for both human and marine life), and the Coast Guard's move also threatens to scrape and scar the river bottom (with anchors and anchor chains) and further endanger sturgeon and other critical species.

The oil industry, to be clear, is already pushing oil pipelines on land throughout the Hudson Valley, moving volatile crude oil on rail (known as "bomb trains") and putting our river at immediate risk. Now the industry, aided and abetted by the Coast Guard, wants to escalate this volatile equation and place more oil precariously on the water, a bet that no elected official in their right mind should wage. We can put a stop to this, and should, by telling a taxpayer-funded agency, the Coast Guard, to guard against industry interest and protect the greater good, our river, and all the human and marine health and economies that depend on it. (Send your comments to the Coast Guard here.)

Second, nuclear plants are currently killing billions of fish, eggs and larvae in the river. Power plants along the Hudson River are withdrawing 1.2 trillion gallons every year. Sound benign? It's not. Yet, the industry-friendly Nuclear Regulatory Commission refuses to protect public interest. Plants like Entergy's Indian Point nuclear power plant, which continues to break down and leak radioactive waste and sit insecurely a few dozen miles north of Manhattan, use the river's water to cool their facilities and discharge the heated water back into the Hudson - killing billions of organisms annually. Unlike humans, our Hudson fish hate hot tubs.

It doesn't have to be this way, but we continue to allow private industry to use public assets to pay for this problem. It's time for that to end and to support New York State Governor Andrew Cuomo's call for shutting down Indian Point (and Riverkeeper's work to protect millions of New Yorkers from nuclear disaster).

Third, a high pressure Spectra Energy pipeline, carrying fracked gas for export (so that other countries can have higher carbon footprints) is expanding under the Hudson and adjacent to the failing Indian Point nuclear facility, making a combustible situation even more volatile. While New York's Senators Chuck Schumer and Kristen Gillibrand and Governor Cuomo have called for a halt to the pipeline construction, because of the "threat to the quality of life, environmental, health and safety of residents across the Hudson Valley and New York State without any long-term benefit to the communities it would impact," the construction continues.

Spectra Energy is leaving in its wake destroyed wetlands, clear-cut forests and increasingly endangered Hudson Valley health (don't get me started on the toxic particulates the pipeline will exhaust near my neighboring hometown of Peekskill). Most disconcertingly, the high-pressure pipeline runs within bomb shot of Indian Point's aging nuclear plant, making our region a sitting duck for those who wish to do serious damage. Again, our taxpayer funded Federal Energy Regulatory Commission, a close friend of the private industry, refuses to protect public interest. This, too, must end. (Find out more about how to protect fellow New Yorkers here.)

The fight to protect our Hudson River is back on. In fact, it never ended, but it feels like we're back in the mid-1900s again. This time with different contaminants and dangers, all of which pose serious security and safety risks to human and Hudson River health. We don't need another superfund site but rather serious foresight to ensure that cleanups don't become a river town pastime. Calling on all who care. It's time to rise up for our river.

Michael Shank, PhD, is a resident of Peekskill in the Hudson Valley and teaches sustainable development NYU's Center for Global Affairs.