Travel guidebooks have it all wrong. They tell us about hotels and restaurants and sights we don't want to miss.

What they SHOULD tell us has but four words: 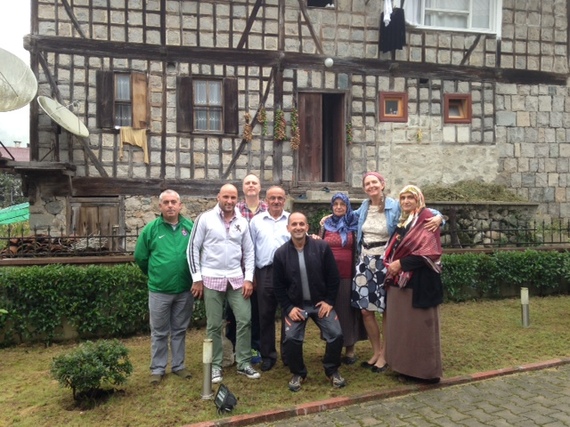 When that happens (and it's a lot easier than you might think), real magic can begin. Locals, of course, know the best restaurants, have true insight about the must-see "sights" and will introduce you to things those writers of travel guidebooks couldn't begin to know.

A recent example of this happened to me in Rize, Turkey. Rize is in the Black Sea region of Turkey and, as the guidebooks will tell you, it has stunning Alp-like vistas, ancient monasteries carved into cliffs and charming seaside villages, all of which you don't want to miss.

But nowhere did any guidebook tell me about Cemal, Nazmiye and Fethi Yetkiner. This beautiful, open-hearted family invited me into their home one Sunday afternoon, fed me a meal that rivals the best of Istanbul's many fabulous restaurants (and that's saying a lot. Istanbul has really, really, really good restaurants) and made me feel like a treasured guest. Maybe I should rephrase that. They made me feel like an important part of their close-knit family.

Sure, I could have spent my day in Rize visiting the Rize Museum (according to the guidebook it's an old Ottoman house complete with a weaving room and antiques) or the Genoese castle that, the guidebooks tell me, has its own tea garden.

But by instead hanging out with the Yetkiners, I learned a travel truth that is far more valuable. I learned about the connection that all of us humans have whether we speak the same language, whether we practice the same religion or whether we live thousands of miles away from each other. I also learned that the State Department doesn't know everything.

The day before my trip to Turkey, the State Department issued a travel warning. It wasn't a warning about the region where I was traveling, but nonetheless, it gave me pause. Plus, what news-savvy American hasn't picked up the notion that we're not likely to win any popularity contests with some Muslims? I don't buy that kind of stereotyping, of course, but I'm a human with a reptile brain. I wondered, "Did I need to be on guard?"

Like most decisions made with my reptile brain, that question was so misguided, so off-base that I'm embarrassed to admit it here.

And to pay penance, I want to tell you how beautiful and meaningful my day was with the Yetkiner family. By the time I met them, I'd already been in Turkey for a week and I was getting accustomed to the call for prayer. Even in remote mountain villages where maybe two or three families lived, the Adhaan was piped over a loud speaker system. I had grown to love it, to look forward to it and to utter my own "wassup" to the Divine each of the five times a day it rang out from mosques and loud speakers across the country.

I also learned quite quickly that hospitality is an art in the Muslim world, a cherished virtue that encourages practitioners to view every person who comes across their path as sent to them by Allah himself. In fact, it's next-to-impossible in Turkey to be in the general vicinity of another human being without being handed a fig or a hazelnut or a bowl of fresh yogurt made that morning from the milk of their own cow.

Hospitality is so over-the-top (commerce, it seems, is beside the point) that any crusty idea I ever had that foreigners are different or that life sucks or that the world is a going to hell in a handbasket were properly dashed against the inhospitable shores of the Black Sea, a region in Turkey that looks more like the Colorado Rockies than Lawrence of Arabia.

Sure, Nazmiye and Fethi disappeared for a few minutes every time the call to prayer sounded (to a room where they kneeled on their prayer rug) and our language barriers prevented us from burrowing deeply into long conversations. But none of that mattered. When they were off praying, I sat on their gorgeous balcony gazing over the misty tea fields, reveling in the beautiful chanting that reminds all who hear it, "There is more. There is more."

When I faltered in trying to saying thank you (my "Tesekkur ederim" still sounds like something my 15-month-old granddaughter might say) for the five-course meal Nazmiye so generously prepared, she hugged me and let me know that she "got it" and that some things are bigger than words.

And after our feast (it's really the only word that aptly applies), Cemal, who speaks perfect English, gave me a personal took of the tea factory (where he knew everyone and proudly provided anecdotes and perspective all guidebooks missed) and a craft factory (where prices were dirt-shockingly cheap), but he introduced me to most every one of his family and every one of his neighbors.

It's an experience I will treasure forever. And a vivid reminder always that "there is more. There is more."