Yesterday, as delegates gathered in Tampa to nominate Mitt Romney for president in the name of less government, less spending and less interference in state matters, Louisiana's Republican governor, Bobby Jindal, stepped up to a microphone and, with Hurricane Isaac on the way, not only demanded federal cash and assistance, but also complained that the cash and assistance already offered by the president -- the allegedly socialist wealth-redistributor president -- wasn't enough. According to CBS News:

Several years ago, Jindal, like Republican vice presidential nominee Paul Ryan, vocally opposed the stimulus but couldn't wait to beg for a slice of the money. In Jindal's case, he even gleefully posed for a photo opportunity with a gigantic sweepstakes-sized stimulus check.

You might also recall Jindal's flop-sweat inducing response to the president's State of the Union address in which Jindal snarked about government spending on transportation and "volcano monitoring." It slipped nicely into the on-going attack on the president as a "wealth redistributor" -- a communist, a Marxist, a European socialist. But then, when the stimulus was passed, and yesterday when Louisiana was confronted with another natural disaster, and when Jindal faced the obvious reality that states -- any state -- are incapable of mitigating and responding to natural disasters, he begged for wealth that's been redistributed from New Yorkers, Californians, Oregonians and Hawaiians with their silly volcano monitoring. (Thanks to Sorkin for inspiring that last part.)

Deepening the meta-inconsistency of the Republican record of "sucking from the government teat" in spite of their perpetual demagoguery of the same, 62 percent of the RNC arena in Tampa was built with taxpayer money redistributed by the state government from Floridians who might never actually see an event there, and if they do, they'll have to pay admission for the privilege (capitalism!).

Meanwhile, the RNC mounted a large digital debt clock inside the arena that will calculate in real time the increase in the national debt throughout the course of this week's convention. The message: government spending is out of control. A Twitter follower said the "We Built This" theme of the convention refers to the debt clock. Hilarious and true. As we've documented here, the largest drivers of the current national debt are the policies that Republican delegates in 2000, 2004 and 2008 demanded: trillion dollar tax cuts, trillion dollar wars and deregulatory policies that caused a major financial collapse and the deepest recession in 80 years. All of these factors have combined to create the debt which the Republicans are currently lamenting. 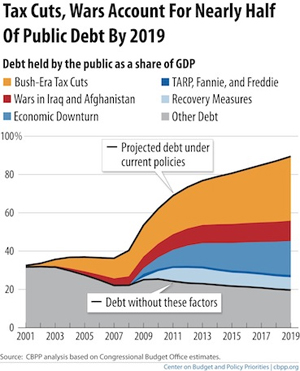 While we're here, what's the mathematical reality? Throughout yesterday evening, speaker after speaker bashed the Obama record on the debt (they also confusingly conflated it with the deficit). Ohio governor John Kasich and Virginia governor Bob McDonnell each insisted that President Obama "doubled" the debt. First, this is patently untrue. The debt has increased by just 41.4 percent during the first several years of the president's term, from around $10 trillion to $15 trillion. Ronald Reagan, on the other hand, presided over a near-doubling of the debt, increasing the number by 188 percent. Bush 41 presided over a 55.6 percent increase, and Bush 43 presided over an 89 percent increase. At the same time, the year-over-year increase in the debt under President Obama has dropped from 15 percent to 4 percent. The president also cut the deficit from $1.4 trillion in his first year to $900 billion in 2013 (projected by the CBO) -- and it's worth noting that $1.2 trillion of the 2009 deficit was inherited from a George W. Bush spending request in 2008.

Yet the Republicans, in predictable form, are merely and myopically staring at the big scary number and taking it at face value -- devoid of context or appropriate comprehension.

So if these confused, self-contradictory people truly wanted to be responsible for cutting government spending, building their own businesses and financing their own disaster relief, perhaps they should be challenged to do so. I assure you, a guy who wants to open a bait and tackle shop in Mississippi will have a hard time bringing in customers when he's suddenly responsible for building and maintaining the roads leading to his store, and he'll have a tough time securing his revenue when the FDIC refuses to protect his bank deposits. Many of the business owners featured in Romney's small government "We built this!" commercials have received loans and grants from the federal government -- money which helped to increase the digital debt clock inside the RNC concert hall.

Naturally, states don't have the tax base to unilaterally finance their own affairs, and the federal government is uniquely positioned to spend money when no one else can. It can stimulate economic growth when businesses and consumers can't invest in the economy and it can help Bobby Jindal rebuild after a hurricane. It can rack up a large debt because its credit is solid and, at the end of the day, it can print money. Businesses can't do that. Families can't do that.

The Republican hatred of the debt is entirely about an apoplectic hatred of President Obama and the notion that perhaps liberal policies could actually succeed, and so they'll latch on to anything that sounds outrageous, irrespective of whether it indicts their own actions and beliefs. If they truly cared about the debt, they would renounce every Republican leader beginning with the Reagan administration and including Mitt Romney, whose economic plan would add trillions to the deficit and the debt. Yet they've fooled themselves into believing that a would-be Republican president could reverse the trajectory of the debt, or even eliminate it entirely, while also making the Bush tax cuts permanent and, as a special unfunded bonus, perhaps an invasion of Iran in there, too. Mitt Romney will do all of the above and more. You know, because the debt is too high.