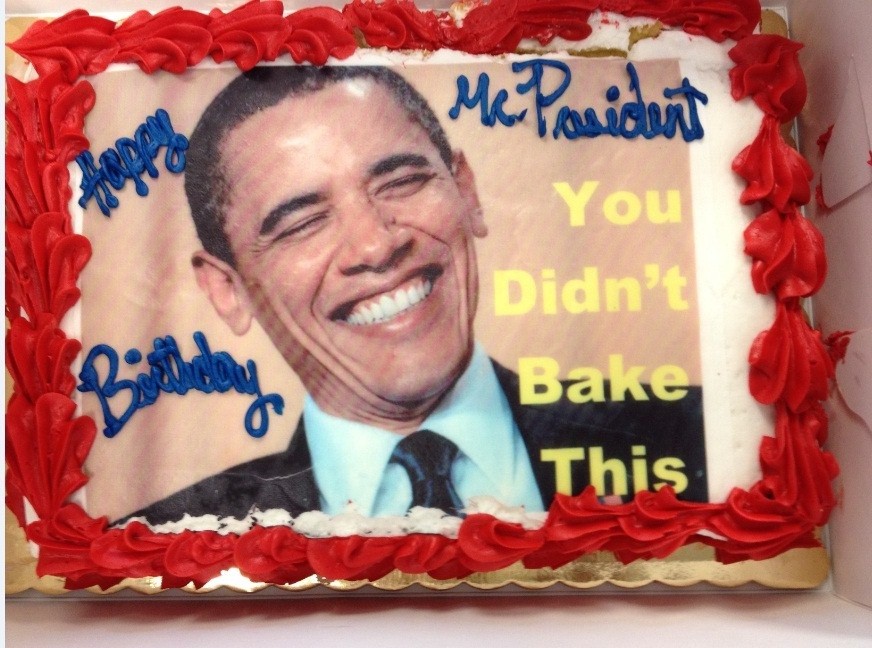 "You didn't bake this," reads text on the cake, which is vanilla with vanilla frosting, according to Yahoo! News. It's a reference to Obama's "you didn't build that" remark last month, which he made while talking about the need to maintain investments in domestic infrastructure for the good of businesses.

"If you were successful, somebody along the line gave you some help," Obama said. "There was a great teacher somewhere in your life. Somebody helped to create this unbelievable American system that we have that allowed you to thrive. Somebody invested in roads and bridges. If you've got a business -- you didn't build that. Somebody else made that happen. The Internet didn't get invented on its own. Government research created the Internet so that all the companies could make money off the Internet. ... The point is that when we succeed, we succeed because of our individual initiative, but also because we do things together."

Republicans have seized on the comment as proof that the president is against the principles of entrepreneurship and American innovation. RNC spokesman Tim Miller continued to make that argument in explaining the cake.

"Since President Obama's birthday is tomorrow, we actually wish him a happy 50.99726 years with this 'you didn't bake that' cake," said Miller, prodding the White House for its explanation that the unemployment rate was actually a fraction lower than the 8.3 percent figure. "We do know that hard working, smart entrepreneurs across the country join us in wishing the president a happy birthday and hoping that next year he has more time for baking so the country can get back to job creating."

The cake marked the second effort by the RNC to take advantage of the president's approaching birthday. Earlier in the day on Friday, they unveiled baracksbirthdaycards.com to showcase fake cards featuring pictures of the president with various celebrity supporters and political figures alongside political attacks on a number of issues.

Obama will celebrate his 51st birthday on Saturday, August 4.

UPDATE -- 6:35 p.m -- DNC spokeswoman Melanie Roussell has responded to the RNC's move, attempting to draw a parallel between it and GOP presidential candidate Mitt Romney's politics.

“This is typical of Mitt Romney’s approach to the middle class," she said. "He wants to ‘Let them eat cake!’ while robbing them blind. We sent the cake back to the RNC, along with a copy of the Tax Center’s report on Mitt Romney’s tax plan.”