In addition to launching a massive robocall campaign raising Obama's past association with Bill Ayers as a campaign issue, the Republican National Committee is out with a vicious attack mailer suggesting that the Democratic nominee is not just soft on terror, but willing to talk to terrorist leaders.

In a pamphlet forwarded to the Huffington Post by a Virginia reader, the RNC claims that Obama "thinks terrorists just need a good talking to." Obama has never said such a thing. Rather, he has discussed the need to open up diplomatic dialogues with heads of state, whether friends or foe.

The first page of the mailer contains a shot of a individuals standing at an airport window with a large plane outside -- obviously designed to evoke memories of the 9/11 hijackings.

"Terrorists Don't Care Who They Hurt," it reads.

Inside is a list of Obama quotes designed to paint Obama as a weak-kneed diplomat, too willing to meet "unconditionally" with leaders of rogue states.

"Islamic extremists want our laws changed, our culture destroyed and our families converted. We don't. What is there to talk about?" the mailer asks. 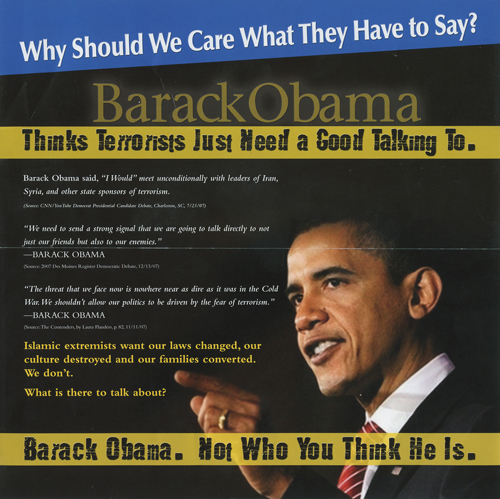 The ad amplifies charges that the RNC and McCain campaign have made against Obama in other forums, and comes amidst a veritable downpour of behind-the-scenes GOP attacks against the Illinois Democrat. In addition to the Ayers-themed attack, Talking Points Memo has documented four McCain/RNC robocalls running in multiple states:

* One that questions Obama's patriotism by saying he put "Hollywood above America" during the financial crisis.

* One that says that Obama and Dems "aren't who you think they are" and claims they merely "say" they want to keep us safe.

* One that attaches Obama to "domestic terrorist Bill Ayers," whose group "killed Americans."

* And one claiming that: "Barack Obama callously denied newborns needed medical attention by opposing a measure to force doctors to preserve their lives when they survive botched abortions."

If you receive any notable political mailings (from the RNC or anyone else), please let us know.