The Republican National Committee released this recent photo apparently showing the contender for the Democratic presidential nod in a romantic embrace with an unidentified white male. The photo, taken in North Carolina, was posted on various conservative websites and was immediately picked up by the mainstream media. 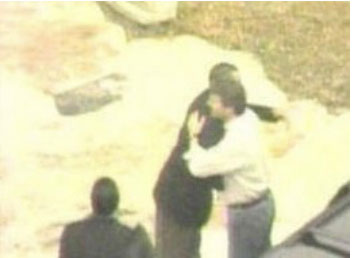 While grainy, the photo clearly shows Senator Obama hugging another male, while a third man, presumably one of his security team, looks around, trying to protect their privacy.

An unnamed Republican spokesperson, while making no value judgments on the homosexual lifestyle, other than it being an abomination against God, implied that the photo certainly raised doubts about the Senator's image as a loving husband, as well as his overall honesty. "Obviously, if he can lie to his wife, he can lie to the country. The American people will have to decide if this is someone they can trust as president. Again."

When reached for comment, a spokesperson for Hillary Clinton, insisted that no conclusions can or should be drawn from the photo, at least before Senator Obama has a chance to explain it to his family. "It is, after all, essentially a private matter of lifestyle choice and nothing more."

A McCain spokesman stated that it was "deplorable" that this kind of swiftboat journalism that has become accepted in national politics, adding, "I think the American public will best be served in this election by the candidates and the media focusing solely on the issues facing our country in the 21st century, and not on some photograph, however salacious and disturbing."

Senator Obama was allegedly on the campaign trail and phone calls requesting him to comment on the matter were not returned.