After much ballyhoo and bellyaching, the RNC has decided that it will officially enshrine its ultimatum to CNN and NBC: cease production on your planned Hillary Clinton movies, or there will be no Republican primary debates on your networks. Or...rather, any such debates will not be sanctioned. Any GOP candidate who appears on any such debates will be...well, I don't know what will happen to them.

This ultimatum is the "news-making" portion of the resolution the RNC has just passed, in which it makes its displeasure over these Clinton projects known. Or rather, more earnestly known -- obviously these complaints have been in the news for weeks. Deep within the resolution, however, is the acknowledgement that the 2012 primary debates were not beneficial to the GOP, and an outline of a sensible plan to improve the way the party handles its primary season debates in 2016.

Here is the resolution that was passed: 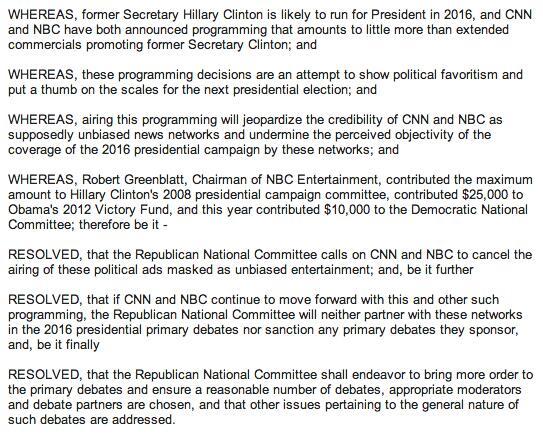 The RNC's paramount complaint is that any sort of Hillary Clinton biopic or documentary amounts to a tacit political endorsement. This has been Reince Priebus' argument from the outset.

As I've previously discussed, there is a reality that Priebus is probably missing. One of the proposed "Hillary Clinton movies" is actually a documentary that's being created by Charles Ferguson, who helmed the documentary "Inside Job" about the financial crisis. It's very likely to be highly critical of Clinton and her husband's administration. As Frank Rich notes: "It’s impossible to imagine that Ferguson would do a hagiography of Hillary, whose husband’s administration empowered many of the villains in 'Inside Job.'"

Obviously, Rich is making an assumption, but it's not a big leap. The irony I'm imagining, actually, is the CNN documentary providing a lot of fodder for future RNC attack ads. I'm going to go ahead and make plans to write the piece titled, "RNC Attack Ad Cites CNN Documentary It Tried To Derail."

Now, as for NBC's proposed Clinton project -- it's a biopic, in which Diane Lane will portray Clinton. This sounds to me like it's going to fit more squarely in the parameters of "hagiography," though I'd prefer to call it "soft focus melodramatic made-for-teevee cheese." Now, I doubt that this movie will ultimately conclude anything other than the fact that Clinton is an amazing, historical figure. I'd suggest to Priebus, however, that there will nevertheless be a saving grace here: This Clinton movie is likely to be really, really stupid.

And as I've previously written, I think Peggy Noonan has sort of grokked what it's going to be like, in the end:

It will be a drama about Hillary’s wonderfulness and when it’s done they’ll privately screen it and an executive will say, “We’re going to be accused of liberal bias, we’d better balance it a little.” So they’ll reshoot some scenes and insert things that might make Hillary look bad, but they’ll choose the wrong things, stupid things, and it will make the whole effort look cheesy.

What I would worry about, if I were in the RNC, is the way Priebus portrays his party as helpless in the face of a few teevee shows. Whatever happened to "never let them see you sweat"? This whole "trembling in the face of some movies about Hillary Clinton" thing is not a good look. Moreover, while I understand that much of this is simply a bit of "working the refs" kabuki, Priebus is actually helping to amplify Clinton's whole phenomenon, when he should be trying to promote what his party and its future candidates are all about.

Priebus, however, does have a debate problem, which is addressed in the last part of the RNC resolution. Bringing an "order to the primary debates" and "[ensuring] a reasonable number" of them? That's a solid plan. Let's definitely never have 20 debates in a primary season again! On this matter, I consider Priebus to be an American hero. (As I'll have to watch all debates that happen, I think of Priebus as being on a mission of mercy, tailored to me, and I really cannot thank him enough.)

I also think that there is absolutely nothing wrong with the RNC angling to put its candidates in debates with moderators who are on the same side of the ideological spectrum. Why not? The singular purpose of the party's primary debates is to help its base make determinations between candidates of a similar ideological strain. Even if this means that Fox News' Chris Wallace serves as moderator for all of them, believe me, Wallace will take that task very seriously.

Over at the Washington Examiner, Byron York agrees that it's the final part of this resolution that really illuminates what's going on in the back of Priebus' mind:

That is what top party officials have wanted to do ever since it became clear that the GOP’s grueling series of twenty-plus debates in 2011 and 2012 created more bloodletting, division, and sometimes embarrassment for the party than enlightenment of voters. Ever since that moment — RNC officials realized it as it was happening but were powerless to stop it — the party has wanted to limit the number of debates and exert more control over who moderated them. That was going to happen even if NBC and CNN had never announced plans for Hillary Clinton programs. And that is what today’s resolution is really all about.

The real question, then, is why did this solid plan for improving the primary debates get inextricably tied to this hysterical garment-rending session over a couple of movies? I don't have a good answer to this question. Maybe the RNC is in this place right now where it can't even move forward without some foil at which to take aim. Maybe it thinks that a decision to limit the number of debates will be met with derision and criticism, and so it's putting forth the Clinton movies as a way of insulating itself from criticism.

The simplest explanation is probably just that any resolution about debates and debate moderators is going to "make news," and the RNC would rather the headline be, "RNC Takes Stand Against Clinton Movies," as opposed to, "RNC Admits That Its Last Set Of Primary Debates Was Embarrassing."

Ultimately, however, the RNC is probably not going to get NBC or CNN to bend to its ultimatum. It is not going to be able to stop NBC or CNN (or Telemundo and CNN Espanol) from staging debates. It is not even going to be able to stop Republicans from participating in those debates, if they really want to do so. That's a lot of battles that it can't really win, so why fight them?

RNC Resolution Addresses Debate Problem, Then Complicates It
Painfully Awkard Debate Moments
1 / 16
'The Stumble'
Texas Governor Rick Perry's <a href="https://www.huffpost.com/entry/rick-pery-forgets-federal-agencies_n_1085312" target="_hplink">inability to remember</a> the third agency he would cut as president had many predicting the untimely end of his campaign for president. Perry addressed his mental lapse before reporters after the debate, admitting, "Yeah I stepped in it man. Yeah it was embarrassing. Of course it was."