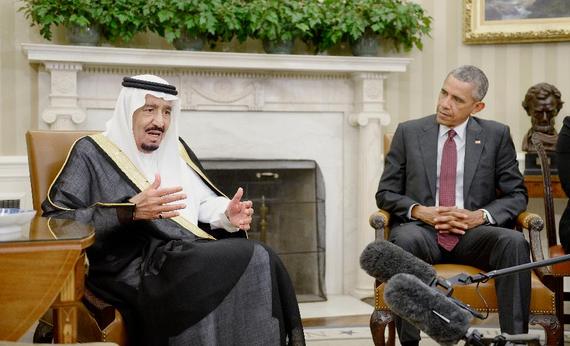 When President Barack Obama told the people of America on Monday that "it is the responsibility of Muslims around the world to root out misguided ideas that lead to radicalization," he was stating what should have been obvious: Americans and Europeans cannot purge Islam of the poisonous ideology that has taken root within the faith.

The United States, France and Russia can drop all the bombs they want on Iraq and Syria, but they cannot defeat the Islamic State by destroying buildings and trucks.

If they wished, they have the power to send thousands of ground troops, armed with heavy weapons, to occupy both countries, wipe out ISIS forces, and then stay there to keep order. That still would not result in the elimination of ISIS. Its followers would simply go underground and bide their time.

The loud voices that have responded to the mass murders in Paris by calling for intensified military action have a thin grasp of history. The United States sent more than a half million troops to Vietnam but did not prevail. The Soviet Union was forced to retreat from Afghanistan. France did not keep Algeria. We should have learned that Western powers cannot permanently impose their will by force on insurgent movements whose adherents have long-term ideological commitments.

If ISIS is to be extirpated from the Muslim world, it will have to be done by Sunni Muslims, not by outsiders. Their mentors and sympathizers, primarily in the Gulf, will have to undertake a serious effort to uproot the ideas and beliefs that are the foundation of the Islamic State. Doing that will be especially difficult for Saudi Arabia, which spent two decades and billions of dollars to spread worldwide a version of Islam that is uncomfortably similar to that of the Islamic State.

It's hard to argue with Richard Bulliett of Columbia University, who wrote: "King Salman faces a difficult choice. Does he do what President Obama, Hillary Clinton, and many Republican presidential hopefuls want him to do, namely, lead a Sunni alliance against the Islamic State? Or does he continue to ignore Syria, attack Shi'ites in Yemen, and allow his subjects to volunteer money and lives to the ISIS caliph's war against Shi'ism?" He predicted that "In five years time, Saudi Arabia will either help defeat the Islamic State, or become it."

King Salman and other prominent Saudis have said all the right things about ISIS atrocities, and for a time Saudi warplanes participated in the international coalition conducting air strikes against ISIS positions. But the Saudis then transferred their planes to the war in Yemen--a war against Shiites, while the conflict with ISIS is a war against Sunnis. Saudi Arabia's ideological dilemma This ideological dilemma for Saudi Arabia can be traced to November 1979, when a group of armed Saudi renegades took over the Great Mosque in Mecca at gunpoint and held it for days against futile efforts by Saudi Security forces to retake it. The rebels accused the Saudi regime of being unreligious: westernized, liberal, tainted by un-Islamic ideas. One of them was proclaimed the mahdi, the Rightly-Guided One who will restore the true faith.

In the end the rebels all died, but their ideas prevailed. As an old adage in region goes, they lost the battle but in many ways they won the war. So traumatized were the Saudi rulers that they acted to burnish their religious credentials by implementing many of the rebels' demands. They tightened up on social practices, removed unveiled women from television, and unleashed the muttawa to enforce rigid rules of behavior. They abandoned their longstanding practice of tolerating the semi-clandestine religious services of foreign workers. More than that, they pumped billions of their oil dollars into spreading their Islamic ideology, as it had been taught by Muhammad ibn Abd al-Wahhab, the 18th century preacher who had demanded that Islam purge itself of alien influences and shun contact with unbelievers.

From West Africa to South Asia, the Saudis dispatched imams to preach this uncompromising version of the faith; they sent textbooks; they financed religious schools called madrasas; they paid to build mosques. These religious messages did not, of course, tell Muslims that they should go to Europe and kill innocent people. But they did teach that Islam worldwide must defend itself against its relentless enemies, the "crusaders." Bombings of ISIS by Westerners reinforce that idea. Weaponry can't overpower ISIS' beliefs That ideology came back to bite Saudi Arabia when Osama bin Laden and his Al Qaeda compatriots returned from the war against the Soviets in Afghanistan and attacked the Saudi regime--which in their view had committed the unpardonable sin of allowing half a million non-Muslim troops, led by Americans, to use Saudi Arabia as a base for attacking Muslim Iraq in Operation Desert Storm.

With its instinct for self-preservation, the Saudi regime now portrays itself as a firm foe of the kind of extremism represented by al-Qaeda and ISIS. But the ideas it spread have taken root among many disenchanted and disenfranchised Muslims--the ones who believe that if they enforce their version of a purified Islam as it was practiced in the time of the Prophet Muhammad, a purified world purged of heretics and apostates such as the Shiites, they can achieve peace and prosperity in accordance with God's law.

No amount of weaponry can overpower that deeply-held belief among the small percentage of Muslims who sympathize with the tactics of ISIS. Only the Saudis and their allies in the United Arab Emirates and Kuwait can do that.

Can the Saudis lead that effort without repudiating the faith they have promoted for the past generation?

*This article was originally published on Forbes.com