Welcome back to Road Trip U.S.A., a journey to showcase the best of America's travel-scape, one state at a time. Driving from state to state, it's my job to illustrate the breadth of possible adventures available to you in the most diverse country on Earth, and to remind us what we love to experience in these United States.

Road Trip Kentucky was all about glass, art and flame working in Louisville. Driving along the scenic Ohio River to the west of Louisville is the southern Indiana city of Evansville. Today, the population of Evansville is around 120,000, give or take a few thousand, but in the time before European settlement, this same area was home to several distinct Native American cultures spanning thousands of years -- and to them a "metropolis" was a mere 1,000 people. 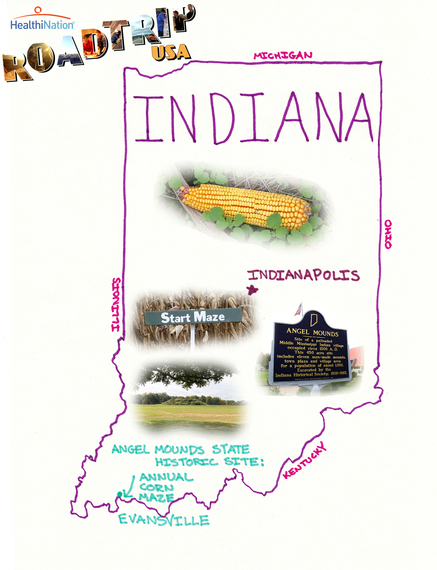 The Angel Mounds Native American site is along the Ohio River about as far south as it's possible to go in Indiana. It's been a protected state treasure since the Indiana Historical Society was able to procure the site from the Angel family farm in 1938; the Historical Society recognized the importance of the mounds themselves, as evidence of the largest pre-European Native American "metropolis" of its time in what is now the State of Indiana. 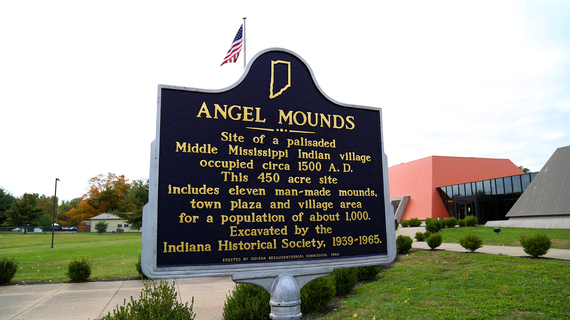 This welcome center and interpretive museum sits adjacent to the open green spaces of the mounds themselves, allowing visitors the opportunity to learn about the Native cultures whose footsteps they're about to walk in. Archaeologists estimate the settlement time of Angel Mounds starting at about 1000 A.D., finishing up as late as 1450 A.D. (the dates have been refined since this plaque was written). Sometime around 1450 A.D., a full 220 years before the Europeans came to Indiana, the remaining population of Angel Mounds dispersed and ventured downstream, abandoning their city. The reason for the abandonment is unknown, however some theories speculate that it may have been triggered by droughts affecting the staple crop of the time, corn.

What we see now as an earthen mound, would have been, in the early years of the last millennium, the seat of power in this region of the Ohio River. The hereditary chief of the Angel Mounds area would have inhabited the top of the highest mound, built specifically for him. Unlike pyramidal structures typical in Central America, these mounds were, for lack of a better term, more "moundish." They were constructed from riverbank mud carried by villagers to create high points, centralized structures of importance, in an otherwise flat landscape. 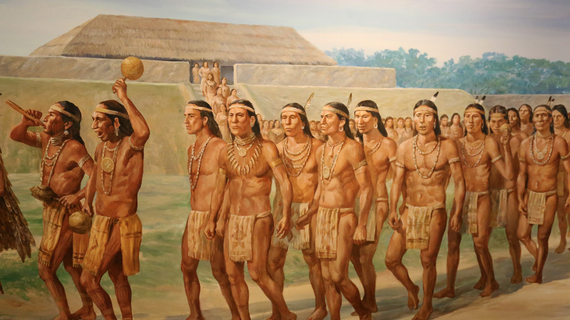 By using our imagination, we can visualize more clearly the mounds and their inhabitants. These are the Mississippians, tribes of mound-building Native Americans who occupied vast swaths of the Mississippi River Valley with multiple centers for trade and culture, speaking multiple languages. They were the ancestors of tribes encountered by Europeans hundreds of years later, but their culture had largely dispersed and evolved by the time their descendants ever laid eyes on a "white man."

It's an ear of corn! I want you to take a look at it for a second and run this thought through your head: this item, more than any other, connects the extinct culture of the Mississippians of Angel Mounds, to the modern 21st century culture Americans live in today. 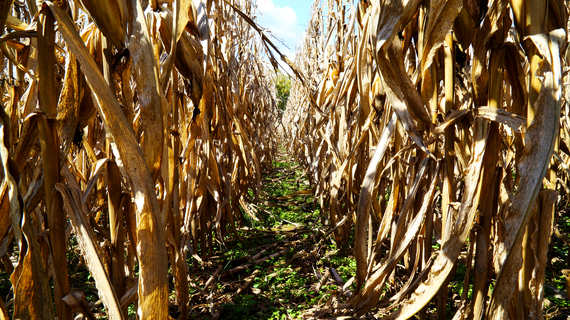 Maize, what we call corn, was the starch (the container of calories) necessary to grow the Mississippian society to the size which occupied Angel Mounds (archaeologists estimate about 1,000 inhabitants at its prime). As if North America were under a historical imperative marching through time, the same equation applies to the U.S. today. We grew, and continue to grow, our society (numerically, and around the waistline), from the calories locked inside the corn kernel.

It varies from person to person, but the average American is composed mostly of carbon atoms that made their way into us by way of corn (the meat in a fast food hamburger is largely the result of cows, which consumed corn, for example). As journalist and food author Michael Pollan describes it, "We are what we eat," and what we eat is corn. 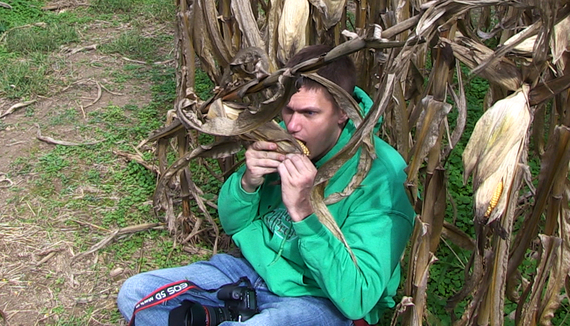 Which I think makes a perfect metaphor for the idea of a corn maze. I grew up in central New York State, and although we definitely had corn fields ("cow corn" as we called it), we didn't have corn mazes, or at least none that I was brought to (and my parents were from farm families). Angel Mounds has a corn maze every year in October, and although I'll freely admit that it's geared towards a younger set of participants, I totally enjoyed it. 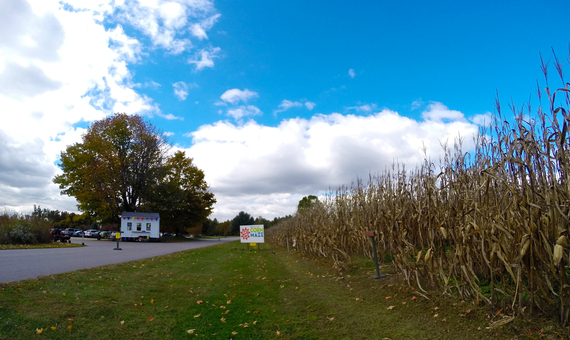 The archeological site, interpretive museum and hiking trails are to the left, and the annual corn maze is to the right. And this is not your grandmother's corn maze, either -- this is an honest-to-goodness maze (the design changes every year), complete with an "Emergency Exit" if you find you can't hack it. 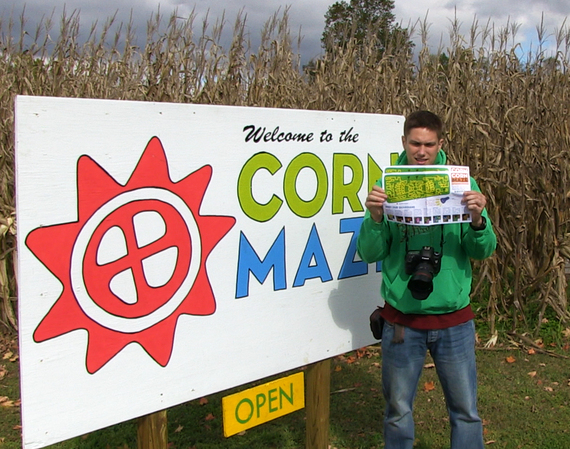 The kind people at Angel Mounds provide you a map to start the maze with, so if you want to test your map reading skills, that's always an option. And for kids (also for highly competitive adults) there's a series of waypoints in the maze marked by "Maize Guardians" and corresponding stamps; collecting all the stamps makes the mazegoer eligible for a raffle prize. 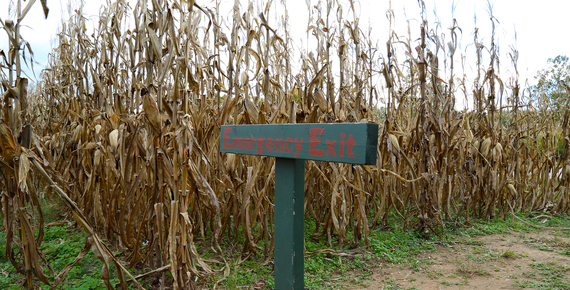 I was serious about the "Emergency Exit." And if I'm to be truly honest in this piece, I have to admit that I "accidentally" wandered out the E.E. thinking I had completed the entire maze (my ego took a bit of a hit that day). I wondered if the Mississippians had recreational activities like corn mazes at the time of their harvests, or if the harvests were such a precious and invaluable commodity that no such wasteful joys would be tolerated. We don't know, but we do know they would have settled at this site specifically to grow corn. And it may have been heavy reliance on that one crop preventing an emergency exit to another source of food if the growing conditions turned against
them. 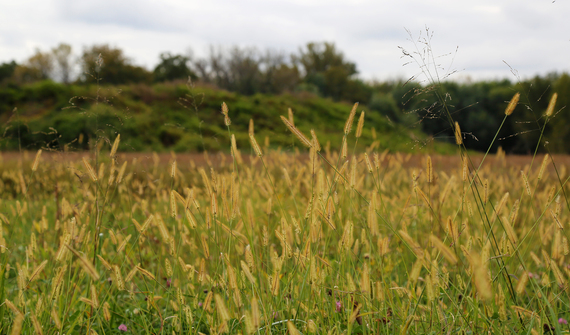 This connection with corn made the lives of the Mississippians more real to me as I visited Angel Mounds and the corn maze. I wondered about how they would have celebrated when harvests were at their peak, and how they would have fought over calories when mother nature had thrown them a curveball. I thought for a bit about how many different ways they would have incorporated corn into their diet, and despite almost certainly having dozens, or even hundreds, more corn dishes than we do today, still not being able to match corn's 21st century dominance of modern food structures. It was easy to revisit these questions on the rest of the drive across America -- there was a hell of a lot more corn still to come.

Photographs in this piece were taken by Kevin Richberg and Alan Bamberg at the Angel Mounds State Historic Site in Evansville, Indiana.