I drove to a national park with my husband for a nature-filled retreat this summer. The drive was long and the hour twilight. The roads were gray and shadowed, trees forming triangular apparitions on either side. I was driving fast -- well over the speed limit -- but others overtook me one after another.

Embarrassed at my slowness, I stepped on the accelerator. Just then, a pair of dark round eyes appeared in the middle of the lane before me. They blinked at the blinding glare of my high-beam headlights. Black button nose, soft ears, white whiskers, all in the face of a tiny bandit, his body crouched. I stepped on the brake but it was too late. A thud sounded as my car hit the baby raccoon.

Raccoons are reviled by many, but their reputation is undeserved. They are intelligent, intrepid, and adventurous. This little raccoon was no more than a couple of months old and must have been out exploring in search for a bite to eat (raccoons are nocturnal). Given that he was alone, he was probably an orphan, his mother likely killed on the road as well -- the most common cause of death for the species.

Dismayed at the incident, I turned where I often turn -- to the internet -- to see how others cope with the grief of killing an animal. What I found was disturbing. "If you happen to meet Bambi one night while driving on a dark road," one article advised, "here's a suggestion: Hit him." There is also a sub-culture of consuming roadkill. The Original Road Kill Cookbook, purported to have sold more than 200,000 copies, depicts the precise method of striking a deer in order to easily load him onto a truck.

Whether animals are killed inadvertently or intentionally, roads are the modern-day hunting fields. Just as there is a sense of power in holding a gun, there is a sense of power in sitting behind the wheel, enclosed in a protective shield of glass and steel. More wild animals in America are hit by a car than shot by a gun. In fact, hunting and roadkill are correlated. Deer, by far the most common target of hunts, chased by four-fifths of the nation's fourteen million hunters, run out onto the road to escape their stalkers -- only to get run over.

Like the orphan raccoon I killed, roadkill is an orphan issue. No agency or organization takes responsibility for it. Roadkill is also a marginalized subject societally, despite the fact that a typical driver runs over one or two animals a year, summing up to dozens over the course of a lifetime. One million animals die on America's streets and highways every day, including squirrels, rabbits, caribou, ducks, frogs, possums, geese, foxes, bears, coyotes, turtles, snakes, elk, raccoons, moose, mountain lions, skunks, deer, and chipmunks. Twenty-one species of animals in the United States have become endangered in part as a result of roadkill. 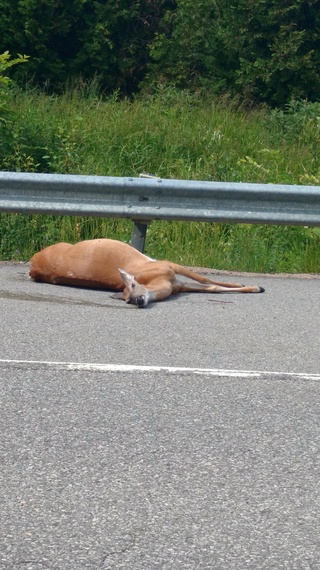 We tell ourselves that animals are to blame, that they shouldn't be out on the road in the first place. A common recommendation to reduce roadkill is hunting, with the logic that if animals are killed in the woods, they won't be killed on the roads. Some articles, such as this recent piece in The New York Times, recommend the introduction of predators. But such solutions are bound to fail or worsen the problem because they're ignoring the crux of the issue.

The problem is not that animals are on the road, but that the road is in their home. Over four million miles of streets and highways slice through their habitats like swords, partitioning them into fragments that are convenient for us but indifferent to them. Many animals have no choice except to cross the road regularly, for their source of food may lie to one side and their source of water or shelter (or their nesting site or mating site) may lie to the other. A road is equivalent to a string arbitrarily dividing a house into jigsaw pieces. You have no option except to step over the string repeatedly for different functions over the course of a single day.

From my examination of the evidence, one solution stands above all others in its potential to save lives. Numerous studies from around the world demonstrate that wildlife fences and crossings reduce mortality by 75 to 100 percent. Fences keep animals off the roads and funnel them toward wildlife underpasses and overpasses, which serve as corridors for safe crossing. A recent case study in Wyoming showcases the effectiveness of the strategy.

The Wyoming Department of Transportation installed twelve miles of fencing, six underpasses, and two overpasses to provide safe migration routes for mule deer and pronghorn (a striking creature that resembles the antelope and is the fastest land animal on the continent). Animal highway crossings were monitored over a period of close to three years from 2012 to 2015. It was found that four-fifths of 60,000 mule deer used underpasses to cross the highway and nine-tenths of 25,000 pronghorn used overpasses. As a result of the safe pathways, pronghorn collisions with cars were eliminated entirely while mule deer collisions plummeted 79 percent. (Pronghorn faced an unexpected danger in the form of hunters, though, who positioned themselves at overpasses for easy access, until the state made it illegal to hunt close to an overpass.) Other animals used the crossings as well, including moose, elk, coyotes, and badgers.

Wyoming's collision reduction is impactful also because pronghorn and mule deer are species in crisis. Once numbering 35 million, the population of pronghorn today stands at under one million. Because of Wyoming's protective measures, both populations are likely to increase.

Financial considerations are often offered as a reason to do nothing. But when it comes to roadkill, it's more expensive to do nothing than to take action, for animal collisions are exorbitantly costly. Seventy people are injured every day and one person dies every other day in the United States as a result of a collision with an animal. The average accident with a large animal costs more than eight thousand dollars in vehicle damage, medical bills, and other costs, and the total expense incurred as a result of animal accidents in the United States is upwards of eight billion dollars a year. In Wyoming, wildlife crossings will pay for themselves in a matter of just four to five years. Reducing roadkill everywhere is beneficial for drivers, auto insurers, and medical insurers.

As long as there are roads and there are animals on roads, roadkill will be a common sight. We can't remove roads, but we can make them safer for both animals and ourselves. Let's save lives by constructing fences and wildlife crossings, and let's watch as animal populations flourish rather than perish.

Sonia Faruqi is the author of Project Animal Farm: An Accidental Journey into the Secret World of Farming and the Truth About Our Food.