Nearly nine decades ago, Helen Keller stood before the Lions Clubs and asked, "Will you not help me hasten the day when there shall be no preventable blindness; no little deaf, blind child untaught; no blind man or woman unaided?" Speaking at their 1925 International Convention in Cedar Point, Ohio, Helen Keller delivered a speech that was equal parts eloquence, emotion and inspiration. And the Lions listened.

For the past 89 years, the Lions have embraced Helen Keller's challenge to become "knights of the blind in the crusade against darkness." I felt honored to address them at their 97th Annual International Convention in Toronto yesterday, and to commend the latest of their tireless efforts to aid the blind and visually impaired. One year ago, Lions Clubs International partnered with the GAVI Alliance to buy and deliver measles vaccines for more than 20 million children. Given that measles is a major cause of vision loss in many places around the world—but can be prevented with a safe and inexpensive vaccine—this groundbreaking partnership will indeed hasten the day when preventable blindness is no more. 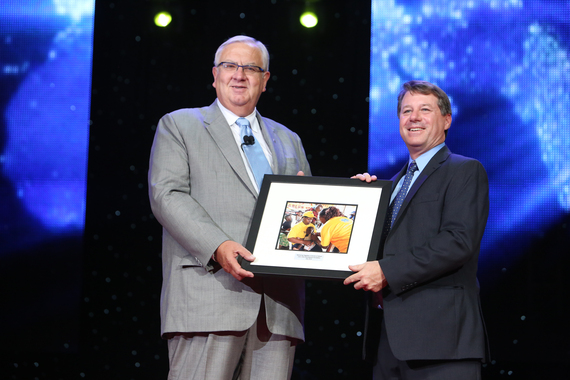 One of the most contagious viral diseases ever known, measles claims the lives of 330 people every day. Tackling this formidable disease takes a unique kind of determination—and the Lions have exemplified this through their commitment not only to providing financial support, but also to serving as volunteers, delivering vaccines to children in last-mile clinics around the world.

I've seen the same determination in parents around the world who fear measles. In a remote part of northern Nigeria earlier this year, I met a young woman who walked miles past her local health center to a farther clinic with the sole purpose of getting her son Ado vaccinated for measles. Ado's vaccine—and his mother's willpower—may have saved his life. At 17 months old, he weighed just over 6 kilograms (13 pounds), the normal weight for a 6 month old. Malnourished children like him are at the highest risk for death by measles, and the ones whose lives can be saved by the perseverance of the Lions and GAVI.

The Lions' devotion to bettering their communities and the world sets an example of loyalty for all of us. Along with the UK's Department for International Development (DFID), we at the Bill & Melinda Gates Foundation are going to match the $30 million generated by Lions Clubs International to protect children from measles, bringing the total to US$ 60 million.

Nearly nine decades after Helen Keller's pivotal speech, Lions Clubs International has grown tremendously—both in size (to a network of 1.35 million volunteers) and in global reach. Their nearly century-long combination of "courage, strength, activity and fidelity" makes Lions Clubs International the perfect partner to help us deliver on the promise of childhood immunization.