Rob Bell is a heretic.

And so are you.

But that's the good news.

It's also part of the message of Bell's new book, Love Wins: A Book about Heaven, Hell and the Fate of Every Person Who Ever Lived, in which Bell, 40, pastor of 10,000-strong Mars Hill church in Grandville, Mich., reexamines Christianity's traditional understanding of life, salvation and what happens after we die.

The book, which will be released by Harper One on Tuesday, drew the ire of critics (many of whom had not yet read it) last week, lighting up the Twitterverse and the blogosphere with condemnations of Bell and his theology.

They called him a Universalist. A wolf in sheep's clothing. A false prophet. A radical. Dangerous.

And more than a few have labeled Bell, one of the most influential voices in evangelical Christianity today, a heretic. 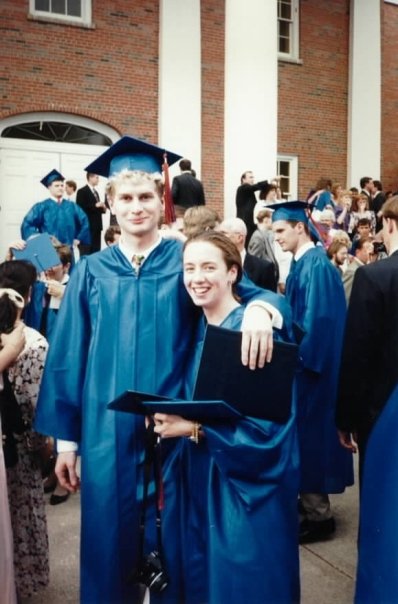 For more than half of my life, I have been blessed to know and call Bell friend. I met Rob and the woman who would one day become his wife when we were all freshmen at Wheaton College in 1988.

There are few people for whom I have more respect and admiration than Rob Bell. There are fewer still that I trust more spiritually, as a pastor, as a humble follower, listener to and lover of God.

So I wasn't remotely surprised that my friend has been able to weather the intense media (and ecclesial) firestorm with characteristic grace and great humor.

While Bell hardly revels in being called a "heretic," the label isn't altogether wrong, either.

"If you go to [the etymology site] Etymonline.com, it's roots are in a Greek word hairetikos that means, 'able to choose,'" Bell told me Monday by phone from New York City's Central Park, where he was strolling with his wife, Kristen, stealing a few quiet moments between media appearances.

"Everybody is forced to believe or think or subscribe to a particular thing, but there are those who are able to choose -- how awesome is that?" Bell said, laughing.

Having been created by God with free will, we are all able to choose and make decisions for ourselves, including whether to accept the love of Jesus Christ and walk in the light of that love, or not.

Essentially, we're all heretics because we all have the ability to choose.

(Speaking to his Mars Hill congregation this past Sunday, Bell also pointed out that the word "radical" comes from the same word as "radish," meaning "root." In the 17th century, "radical" came to mean, "returning to the origin" or "essential." A radical, therefore, is someone who is returning to the roots, the original, and the essence.)

"One of the most lethal aspects of that word -- 'heretic' -- is that it ends discussion, it rather than starts them," Bell said. "And that's why I think it's so dangerous. It ends discussion and it's holding hands with violence."

"I wrote it for people who are thirsty," he said.

Rather than undermine the singular power of Jesus' story and claims in the Gospel, Love Wins is, to my eye, a love note to and about Jesus the Christ.

An image Bell returns often in Love Wins is that of Jesus being the rock that gives water, an image from Hebrew scripture where Moses, leading the Israelites through the desert, called on God to give them water. God told Moses to take his staff and smack a rock with it. The rock cracked open and water spilled out. A cranky bunch of people wandering in the desert slaked their thirst.

Jesus, Bell says in Love Wins, was (and is) that rock. Even when he wasn't called by that name, even when people don't recognize him, Jesus is always the one who brings grace and salvation.

"Not everybody sees it, not everybody recognizes it, but everybody is sustained by it," Bell writes. "He is the answer, but he is also the question, the hunt, the search, the exploration, the discovery."

Jesus is the rock and there is water there.

"I set out to try and tell the millions of people who are compelled with Jesus or who have never heard of Jesus ... or who can't swallow the package they've seen, about Jesus," Bell told me. "That's what I'm about. I'm interested in painting the most beautifully compelling pictures and images and metaphors and stories and explanations possible that will put Jesus in language for a world that desperately needs to hear it.

"I am happy to have a conversation with anybody, but defending what I'm doing or trying to convince other people of its validity, isn't my calling," he continued. "That is precious energy that could be spent doing the thing that I am here to do. ... I don't have any anger, I don't have any bitterness, I don't have some grudge of any sort. And I'm not at all closed to such things, but it isn't what gets me up in the morning and it isn't why God put me here."

God put Bell here to tell people -- by any and all means necessary -- how much God loves them. And that there is nothing they can do to make God love them more or less. That is the "Good News" of Jesus.

For too many people, though, what they've been told is the good news is actually an ugly truth. They hear that God is full of grace and unconditional love, a God of endless second chances, infinitely patient. But then they hear that God's grace, love and patience expires at death. "Too late," they're told. "You had your chance." That schizophrenic idea of God is simply untenable, Bell says.

"It's psychologically unbearable. No psyche can handle that," he said. "It's devastating."

It's also toxic and a lie. The Good News, Bell insists, is better than that.

"If we have the freedom to choose these things now, that Jesus came to offer us and show us, then I assume that when you die, you can continue to choose these realities because love cannot co-opt the human heart's ability to decide," Bell said. "But after you die, we are firmly in the realm of speculation."

A version of this column was published originally by Religion News Service.