After a months-long slew of reports on his bizarre and belligerent behavior, Toronto Mayor Rob Ford finally announced on Wednesday that he will take a leave of absence to seek help for substance abuse.

Ford had consistently refused to resign in previous months -- despite City Council's decision to strip him of many of his powers -- and his change of heart comes on the heels of news about the existence of a second tape that appears to show the mayor smoking crack cocaine.

"I have tried to deal with these issues by myself over the past year. I know that I need professional help," Ford said in a statement.

Ford's incoherent tirades have become infamous, and the list is long. To recap why the mayor seeking treatment may not be the worst idea, take a look at these ten troubling Rob Ford episodes that hit the headlines. 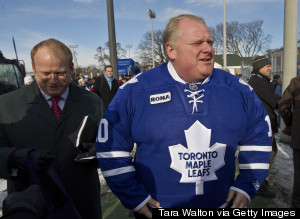 1. The Hockey Rant In 2006, Ford, then a city-councilor, was removed from a Toronto Maple Leafs game after turning on a man who asked him to be quiet. "Who the fuck do you think you are? Are you a fucking teacher?" Ford responded, according to Canada's The Globe and Mail. "Do you want your little wife to go over to Iran and get raped and shot?"

The couple would not have recognized Ford if it wasn't for the business card he left behind. Ford later emailed to apologize after admitting he had "one too many beers." He wrote to the couple: "My complete lack of manners were unprofessional, immature, and do not in any way reflect my usual behavior in public."

2. The OxyContin Phone Call. When Ford was running for mayor in 2010, he publicly apologized to an HIV-positive gay man for making offensive comments about homosexuality and AIDS several years earlier.

Shortly after, the Toronto Sun obtained a taped phone conversation between them in which Ford agrees to try to secure prescription painkiller OxyContin for the man. "I don’t know any drug dealers at all... I don't know this shit, but I'll fucking try to find it,” Ford said. Ford later explained that he had only agreed to secure drugs to "get him off the phone" and said he had been set up.

3. The Gala Fail Ford showed up late to a gala event celebrating Canada's armed forces in February 2013, and was soon asked to leave. According to the Toronto Star, "he was speaking in a rambling, incoherent manner that alarmed some of the guests."

4. The Proposition Sarah Thomson, who ran against Ford in the 2010 mayoral election, said that at a political event in March 2013, Ford grabbed her inappropriately and suggested they have sex. Thomson later said she believes Ford was on cocaine at the time. 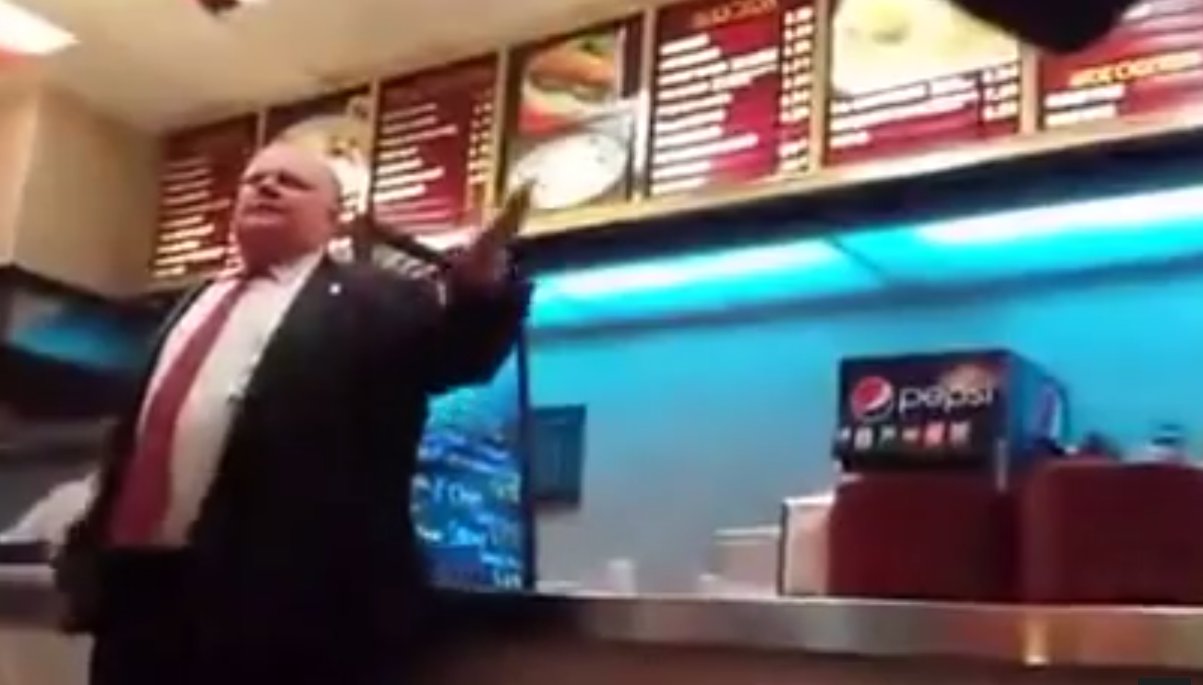 5. And Then Came.. The Crack Video In May 2013, journalists at the Toronto Star and Gawker were amazed when they were offered to purchase a video of Rob Ford smoking crack. Reporters who saw the tape described a rambling Ford inhaling from what appears to be a glass crack pipe. Amid the mumbled rant, Ford appears to call Canada's Liberal Party leader a "fag" and the high school football team he coaches "just fucking minorities," according to the Toronto Star.

The video has never been publicly released, but Toronto police said in October they had recovered the copy. A week later, Ford admitted he had indeed smoked crack. According to The Guardian, Ford said his previous denials were not lies, rather reporters hadn't asked the right questions. "Yes, I have smoked crack cocaine but ... am I an addict? No. Have I tried it? Um, probably in one of my drunken stupors, probably approximately about a year ago," he told reporters. 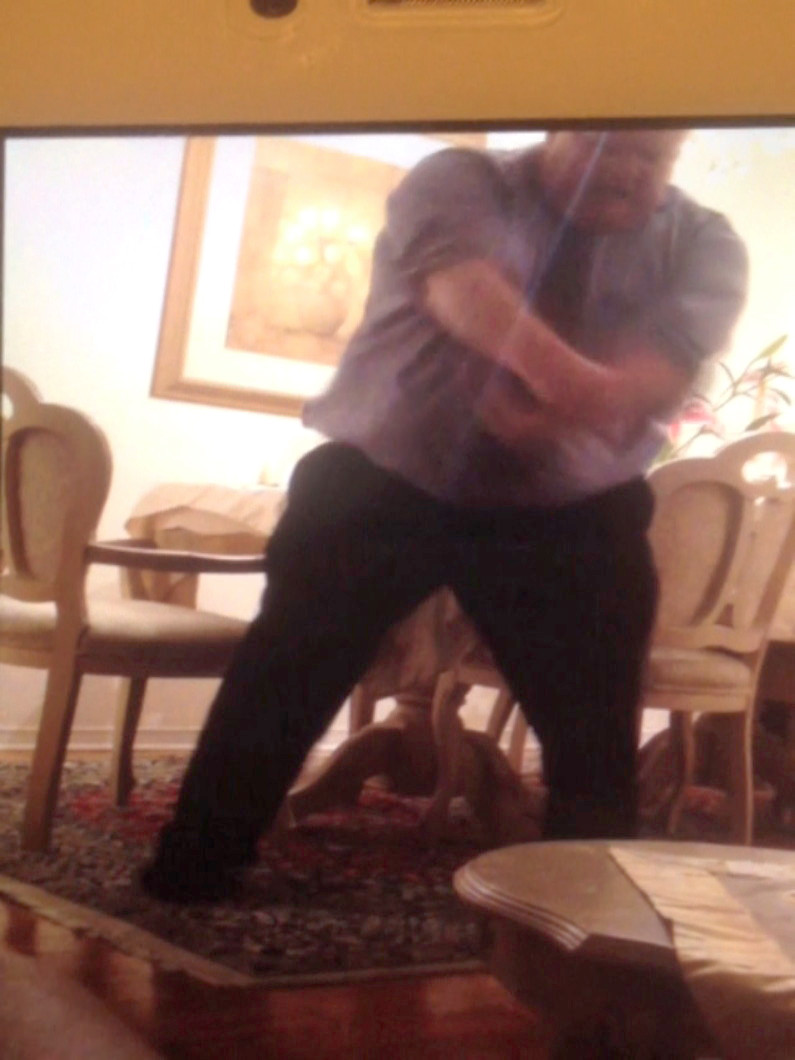 6. The Wild Death Threats In November 2013, a new video emerged in the Canadian press showing a crazed Ford threatening to kill an unidentified man. "I'm going to kill that fucking guy. I'm telling you it's first-degree murder ... He dies or I die, brother," Ford appears to say in the undated video, apparently speaking to a room full of people. "I need fucking 10 minutes to make sure he's dead."

The mayor responded by saying he was "extremely, extremely inebriated" when the video was taken.

7. Yes, Drunk Driving, Too In November 2013, Ford scathingly admitted to drunk driving. "I’m sure none of you have ever had a drink and gotten behind the wheel," he jibed sarcastically at reporters. He then responded to sexual harassment allegations with graphic comments about his sex life. Responding to the claim that he told a former staffer he would “eat her pussy," Ford responded “I’m happily married, I have more than enough to eat at home.”

8. The Jamaican Rant In January 2014, a video of Ford slurring and insulting Toronto's police chief was posted on YouTube. In the clip, the mayor also attempts Jamaican slang apparently throwing around derogatory Patois expletives. Having pledged to stop drinking, Ford admits that he had drunk "a little" when the tirade was filmed at a steak restaurant in Toronto, according to CBC News.

9. The Other Crack Video A drug dealer offered to sell Canadian reporters a new video allegedly showing Ford smoking crack days earlier in his sister's basement, The Globe and Mail said on Wednesday. The newspaper released images of the film, which they said shows Ford taking drags from a pipe and behaving erratically.

10. And So it Continues The same day, the Toronto Sun released an audio recording of Ford apparently insulting his wife, his mayoral opponent, the gay community and bar staff this week. "I'd like to fucking jam her, but she don't want," he says of opponent Karen Stinz in the tape. Ford told the Toronto Sun he doesn't remember saying any of it.

1 / 11
"Assgate"
<a href="http://www.huffingtonpost.ca/2013/03/08/sarah-thomson-rob-ford-facebook-photo_n_2836245.html?utm_hp_ref=robford">In March, former mayoral candidate Sarah Thomson accused Rob Ford of grabbing her behind</a> while at an event. She <a href="http://www.huffingtonpost.ca/2013/03/11/sarah-thomson-rob-ford-cocaine_n_2853183.html?utm_hp_ref=robford">later suggested the mayor was so out of it that she wondered if he was on cocaine. Ford has denied the accusations. </a>
Sarah Thomson/Facebook