The longtime star covers the new issue of Vanity Fair, revealing an excerpt from his upcoming autobiography, "Stories I Only Tell My Friends." The passages, which he reads in a podcast on the magazine's website, focus on his teen idol era, and, more specifically, his time shooting the star-studded film adaptation of "The Outsiders," which would prove to be his breakout film.

Co-starring with young heartthrobs such as Emilio Estevez, Tom Cruise, Patrick Swayze and Matt Dillon, Lowe talks about his amazement at the strange world of Hollywood celebrity.

"The Outsiders" auditions was the first time Lowe got to know Cruise. "He's open, friendly, funny, and has an almost robotic, bloodless focus and an intensity that I've never encountered before," Lowe remembers. He describes a scene in which he's taken aback by the accommodations provided for them at a New York City hotel -- but because they had to share rooms, Cruise called his agent to make sure it was okay. "Zeroed in like a laser," is how Lowe describes him at the time.

Lowe also talks about another teen star at the time, Charlie Sheen. He calls Sheen a "one-of-a-kind... a Polo preppy clotheshorse in a world of O.P. shorts and surf T-shirts," and describes his unique personality as "a wonderful mix of nerd... and rebel." His home, thanks in part to the success of his legendary father Martin Sheen, boasted "never-ending Häagen-Dazs, brand-new BMWs, a lagoon pool with underwater tunnels, and a lit, professional-grade basketball half-court."

Sheen and Lowe were recently in the news together under more bizarre circumstances; after Sheen was fired from his starring role on "Two and a Half Men," rumors circulated that Lowe was a potential replacement. Though displeased with his firing, Sheen approved of that possibility, saying, "He's a buddy of mine, he's a beautiful man, a brilliant actor, and I hope he does it and kicks its ass because I still get [paid]."

There will be no "Two and a Half Men" chapter in Lowe's book, however, as the rumors were quashed by the executive producer of "Parks and Recreation," the hit NBC comedy on which Lowe currently stars.

For more from Lowe, including memories of his other Brat Pack brothers, click over to Vanity Fair. 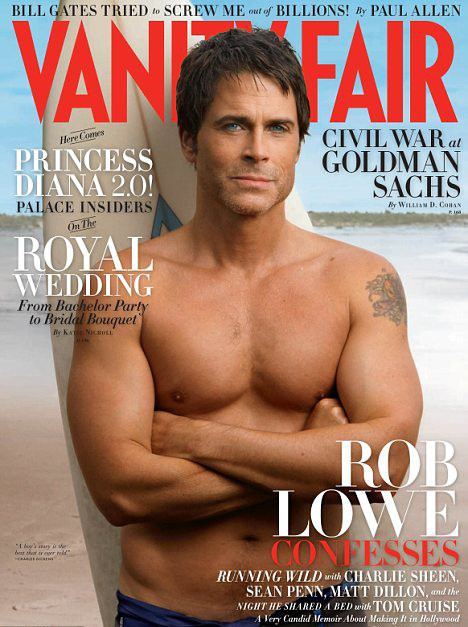