It's been over 40 years since the iconic mafia movie The Godfather was released, but from Goodfellas to The Sopranos and now Boardwalk Empire, those wise guys still fascinate us. However, two highly recommended new screen projects, Rob the Mob and 24 Hour Rental, seek to demythologize the romantic popular notion. 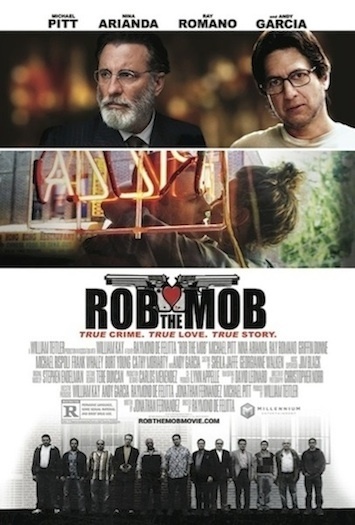 Rob the Mob, written by Jonathan Fernandez and directed by Raymond De Felitta, opens in New York on March 21 then expands to other cities March 28. The movie stars Michael Pitt and Nina Arlanda as a modern-day, real-life Bonnie and Clyde who literally robbed the New York mob in the early 1990s.

Especially from The Godfather on, we've romanticized crime. When my family moved to small-town New Jersey, the mob mythology was everywhere, and it was like a badge of honor to say you were sort of connected. Later, I went to the 2007 trial of Dominick Pizzonia, a reputed Gambino figure, and the alleged killer of the real-life, larcenous duo, Tommy Uva and Rosie De Toma. Just like the real-life Tommy, who wrote down the addresses of social clubs mentioned at the earlier Gotti trial, I noted the addresses of social clubs in Queens and Brooklyn and went to check them out. The first time I walked in, I was expecting Al Pacino from The Godfather, but instead it was like a handful of old guys drinking coffee, with fake wood paneling and cottage cheese ceilings. There was nothing romantic about it. These weren't glamorous mafia hangouts you saw in movies, they were like bad pizza parlors. That gave me a fresh idea, to portray the mafia and their clubs the way they are today.

Fernandez, who recently sat in a movie test screening in a New Jersey mall, said it was the "most exciting day of his life" when the audience roared out loud with laughter:

Rob the Mob is a drama for people who love mafia flicks. It's a comedy, laugh out loud funny. And also a love story. They were two crazy madly-in-love kids, who pulled it off, robbing a dozen social clubs, sometimes twice. They had a modern Bonnie and Clyde run, but you know how these things end...

There are a lot of laughs, too, in 24 Hour Rental, a must-see, black comedy that's initially airing on Canada's Super Channel and which co-stars action-adventure hero Michael Biehn (Terminator, Aliens, The Rock). He calls the new series "like nothing you've ever seen before," adding, "It's the most outrageous politically incorrect show I've ever seen on TV. It's not often I read a script where I'm laughing out loud and thinking -- they're going to make this? But it's shocking with a satirical nod and a clever wink." 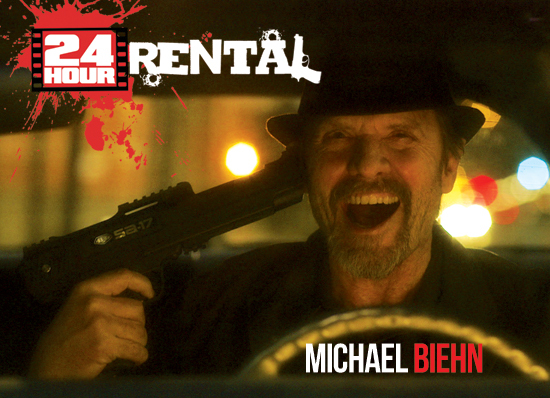 24 Hour Rental is really the story of an exiled, ex-mafia prince and his battle to get back to the top. All the jokes aside -- they are running a criminal organization out of the back of a video store -- you get to watch a pretty complex mobster saga with double crosses and violence, all for the glory of the ill-gotten gain.

Look, we all loved The Sopranos, but the idea that Tony is a good guy is absurd. So we're doing a parody of anti-hero worship. We've watched the growing worship of the anti-hero and how some veneer of moral responsibility somehow makes these people likable and turn into heroes. We wanted to remove any bit of sympathy we often have for our anti-hero. That's why we have a promo line -- 'So **ck heroes. There aren't any of them here.' But we still wanted to make our characters like Tracker (Romano Orzani) and Buzz (Biehn) accessible.

To take familiar gangster themes and bloat them to the point of absurdity, Mihalka and his team leaned on one of literature's greatest satirists:

One of our influences was satirist Jonathan Swift's Modest Proposal which suggested the Irish economic problem could be solved by selling children for their meat. Swift was effectively mocking heartless attitudes towards the poor. Similarly, with 24 Hour Rental, we wanted to satirize modern TV and the way we glamorize anti-heroes.

So if you're into having a wicked chuckle at traditional mobsters' expense, check out both Rob the Mob and 24 Hour Rental this month. It's an offer you shouldn't refuse!