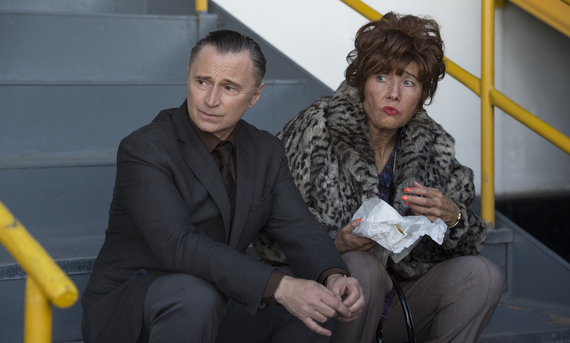 He's best known as Rumpelstiltskin from Once Upon a Time, and his career-defining roles in Trainspotting and The Full Monty. The film and television projects actor/director Robert Carlyle leans toward often include shady, slightly despicable characters. In his latest role, the film Barney Thompson, in which Carlyle both stars in and directs, the shady despicable character trend continues.

In the extraordinary film, Carlyle plays a middle-aged man who is going through a midlife crisis and through a series of bizarre circumstances finds himself caught in a web of murder and intrigue. This dark comedy is probably one of the best I've seen in years filled with colorful characters, superb supporting cast, gorgeous cinematography and editing. The scenes will make you both cringe as well as have you in stitches.

I had the opportunity to speak with Carlyle on the phone about balancing this film, which hits theaters today, March 11th and on VOD as well as with his hit television show, working with Emma Thompson (in one of her best roles ever), weird fan encounters and so much more.

How did you stumble across the books that this film is based on?
There are actually a series of 5 novels. Barney Thomson came to me purely as an actor -- maybe 4 or 5 times over a 7- or 8-year period, believe it or not -- and due to problems with availability, I couldn't quite get around to it.

I found myself in Canada, in Vancouver, and I was friendly with a Canadian producer here. He said, "Can you look at this little script? You might be interested. It's Scottish." And I said, "Yeah, I'd love to read it," and he sent me Barney Thompson again. I couldn't get away from this thing, you know?

So, I gave it a lot of extra thought from that point on, and I thought, "Why are you not responding to this? Because there is something interesting." It's set in Glasgow, my hometown, but it wasn't necessarily a Glasgow that I recognized. There were things that were not quite right. So, well I thought, "Look, if I'm going to get involved in it, it'll have to take a rewrite from more of a Glasgow, Scots, kind of perspective." And over a 12 to 18-month period, we put together what you see.

How did you balance acting in the film and directing at the same time?
That was a kind of crazy thing to attempt to do. That wasn't what I set out to do. I thought I was going to just be Barney. The longer the drafts went on through that 18-month period, it became obvious that if anyone was going to direct this it was probably going to be me since I knew it so well by then. And then the financiers sort of got a hold of it and liked the thought of that; they liked the notion of me both being in it and directing it. And I thought "Okay, dammit, I'm going to give it a go."

How did you get Emma Thompson involved in this picture?
Many years ago, I think I had just done something - The Full Monty or Trainspotting or something like that - a card came through the door, not from the agent, just directly through my door from Emma Thompson. We had never met. It was a lovely card, saying, "Robert, you're doing so well. I'm so pleased for you, congratulations." It was just a really beautiful, unsolicited card from one actor to another. I always thought well maybe one day we'll work together, and I'll try and find something for Emma that I think she would enjoy.

In the original screenplay, Cemolina, the character Emma Thompson plays, only appeared in one scene. I thought no, no, no, this is the standout character; let's expand this to a level where we're going to be able to attract a quality actress to do this.

Once they'd done that, I was confident that they were going to get someone, somewhere, interested in this because the part, women don't get an awful lot of chances to play parts like that -- so I thought I'm sure Emma's going to respond to this. I sent her the script and I also sent her a letter saying: thank you -- 15 years belatedly - for that lovely card you sent to me that time. She replied and agreed to do the role within a day and a half. A day and a half and she was on board. I'm so lucky.

You've have some truly passionate fans. What's the weirdest fan encounter you've had?
I've had a lot. One in particular was when I received this fan letter that came in, which I swear to God, was 30 pages long, written on lots of different hotel stationery. And as I was getting through the letter, I thought wait a minute, I've stayed in all these hotels. This person had been following me around, not only in the U.K., but also a hotel in Barcelona and a hotel in Venice.

Towards the end of the letter, she confessed to it saying, "I've not been following you in a bad way." She was putting across that she was trying to protect me or take care of me and make sure I was going to be okay. Thankfully, I didn't get any more from her.