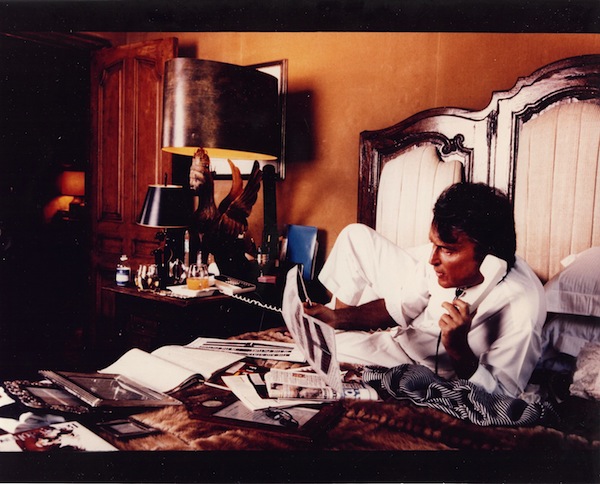 In the introduction to the new edition of "The Kid Stays in the Picture," Robert Evans' incendiary and candid memoir, the film industry legend writes: "Writing, like music or dancing, hungers for that certain rhythm, that beat, that sound. Without it, no matter how talented the artist, his or her efforts get heaped on top of a pile, and then that gets heaped atop another pile. And no matter how high the pile rises, invariably it slides into the world of the unremembered."

Evans should never worry about that. Writing aside, the man will always remain one of Hollywood's more alluring and unforgettable creatures. As the Paramount Studios chief in the 1960s and '70s, he stunned his detractors at the time, defied the odds and went on to produce some of the most critically acclaimed and successful films of all time--Rosemary's Baby, Marathon Man, Chinatown, The Godfather, Love Story. He had help, of course, most notably in the form of Peter Bart, who served as Paramount's vice president in charge of production. (Bart later rose to stellar heights as Editor of Variety.) They were an unbeatable team, yet Evans managed to embody a fascinating new archetype--that of studio chief as "movie star." There was (and still is) something about him--a kind of rare panache; a smooth yet grounded charm--that seems missing from Hollywood today.

After its release in 1994, "The Kid Stays in the Picture" quickly leapt to the top of bestseller lists and was heralded for its honesty and randy storytelling (oh, those revelations about Henry Miller, Henry Kissinger, Jack Nicholson, Sidney Korshak and Ali MacGraw to note but a handful). The 2002 documentary of the same name also generated buzz. The new print edition may have fueled Entertainment Weekly to single out Evans' memoir as "the No. 3 Hollywood tell-all of all time" ahead of Katherine Hepburn and Dominick Dunne's work. It also boasts an afterword and an excerpt from the icon's new memoir, "The Fat Lady Sang," which will be released this fall.

I recently caught up with Evans only to discover that "The Kid"--at 83--still exudes equal portions of charm and spunk, a fiery combo that is now capturing the attention of an entirely new generation.

Greg Archer: It's been almost 20 years since the release of 'The Kid Stays in the Picture' ...

Robert Evans: I've learned one thing. I live in a different world today than when I wrote that. Now, there's an entire young generation that can learn a lot about the book. It's strange. It's developed its own cult. I don't understand it.

Greg Archer: Why do you feel that is?

Robert Evans: Because it describes a particular kind of culture; a way of life. I've had a roller coaster life. Many young people have seen the movie and it had a big impact. The book--there's three movies there. I was at Book Soup the other day and there were lines all around--they all wanted the book. If I had written something like fiction, it would not have captured their attention. I think people want to learn. It's a how-to book in a lot of ways.

Greg Archer: Can you elaborate? A how-to book on ... living life to the fullest or ...?

Robert Evans: Well, there's such a thing as luck. Preparation is one thing but you have to take the bad with the good and I got caught up and down on a roller coaster. My life has not been a honeymoon. Believe me--it hasn't. Maybe seven honeymoons. [Laughs] The reason is because I screwed up my life in many ways and that my work was my mistress. I sacrificed. You don't get anywhere without sacrifice. But you can't take yourself too seriously. You have to get into the ring. I haven't had a vacation in five years.

Robert Evans: I've spent many many years doing it. But the experience has taught me the importance of the writer--from being a reporter or a playwright.

Greg Archer: There's a revealing excerpt from your new book, about meeting with JFK.

Robert Evans: It's true. The book is filled with excerpts from Vanity Fair, and I have a lot of oohs and ahhs in this. Would I want to relive it again? I don't know. It's been a lot, as shiny as it has been. But writers are very under-rated and underpaid. I've spent more time on this than any of the big movies put together. You fix it and fix it. Because life is what it is, I have to add things [to the book].

Greg Archer: I can relate. I'm in the midst of writing a memoir on my Polish family's history; their tale of survival.

Robert Evans: Well, you know better than anyone.

Greg Archer: And there are times when it feels as if there are these creatures trying to get out of me. We stick with it though ... because we know that there is something on the other side of it. Something good perhaps.

Robert Evans: You know, you could copy, verbatim, the same thing I would have [said]. It's ongoing. And you know, I'll be remembered more for my books than for my movies.

Greg Archer: I sense that people will remember you for the films, of course, and your big role in bringing films like Rosemary's Baby, Love Story, Harold and Maude, Chinatown, and others to life.

Robert Evans: With movies, there's hundreds of people involved to make it happen. But as a writer, it's you. And you're stuck with yourself, one way or another. I think writers are the most underpaid people in the world. Because no matter how much you budget your time, you know, if it ain't written, it ain't possible.

Greg Archer: True. Now ... you were involved in the movie business at such a phenomenal time in history and you defied the odds, but I'm curious, when you look at the industry today and compare it what was happening 40 years ago, what are some things that come to mind?

Robert Evans: I feel, and always have, that I can tell stories about how it feels--the human experience. I look at movies today, and I just don't understand machinery. Everything is one-and-a-half dimensions. I like to tell stories where you can laugh; where you can cry; you can see the highs and lows. The emotion. I don't see things out there that are "emotional." I see machinery. But it's a machine and it's the heart that is important.

Greg Archer: That 'emotion' seems to be overlooked in the vast majority of today's pictures.

Robert Evans: Right now, I'm thinking of doing a picture on Delorean. It's a very interesting story. And a lot of people are afraid to make it.

Greg Archer: Why do you think that is?

Robert Evans: Because it's about a person. It's about the ups and downs of a person. They--Detroit--didn't want him to be who he wanted himself to be. He was too good. Actually, I try to stay away from corporate ... I can't deal with the "I gotta keep the fuckin' job" thing. And DeLorean was the same way. I'm a loner. I don't like social events. In my contract at the studio, I wanted to make sure that I didn't have to attend social events. I stay low. I am a loner--for better or worse.

Greg Archer: For better or worse? Yet you've always appeared to be very social?

Robert Evans: Everything is about networking here [in Hollywood], they say today. Well, I am not a networker. I contemplate ... around thoughts ... And you know, if they don't like it--can't help it. I don't know. I've made a lot of mistakes. I made a lot of people a lot of money and if I had it myself, I didn't care. I was never really interested in the monetary very much, but you know, if this book is something young people can read and understand, and have a passion for it--not a passion for the dollar bill, but a passion for what they want to do. But it's tough at times--because I am a loner.

Greg Archer: What do you think has been one of your biggest strengths in life?

Robert Evans: My biggest strength is my biggest fault. It's doing what I want to do. I consider it very fortunate having an opportunity to do that. Other people work because they have to ... I work because I have to, also, but for different reasons. I love what I do and love to do it the way that I want to do it. I go for the jugular. And I don't take no for an answer. No is not an answer. Yes, is. Compliments and all that--don't mean much to me.

Greg Archer: What about the new book, which comes out this fall? What's one thing you can tell me about that?

Greg Archer: So what do you think has gotten you through those seemingly impossible times?

Robert Evans: Passion. And you know, if I could do it, you could, too. It's an important thing to know--whether you are 18 or 80. Everybody has ups and downs. I think the book, 'The Fat Lady Sang'--she sang, but I was lucky she forgot the last verse. And that's why I am there. That last verse is going to be a hell of a verse. An eye-opener.

Greg Archer: A big one?

Robert Evans: You know, if you do it right--artists, writers--five years after we're dead, our work will remain a lot longer than we had lived. I hope to shock 'em--and shock 'em good. And it's better than any pharmaceutical drug.

Greg Archer: What's some of the best advice you've been given about life?

Robert Evans: Every success has been for a different reason, and every failure for the same--I shouldn't have said yes when I meant to say no. I should have said no. Whenever I said yes when I meant no, I was always screwed. Go by your first instincts. It's very important. And also, once is a mistake--twice is a failure. And you know, I don't plan. Today is what counts. You can't do anything about the past. You don't know about the future. This is NOW. Everyday I want to wake up and say, 'Today is the NOW.'

Robert Evans: Action generates inspiration. Inspiration rarely generates action. You gotta get in there. You gotta into the ring. I believe in working smart--not hard. People work long hours these days, but it doesn't mean they work well. You gotta get in there and work--but you don't have to carry it all the time. Forever is a hell of a long time. Each day, I want to suck it all out; and make the most I can with it. I do it my own way. It's not the way of others--not that I am right and they are wrong. A lot of people I have worked with have been extraordinarily successful people. I do my thing. I love it.

Greg Archer: Do you have a lot of regrets?

Greg Archer: Are you saying you would not have wanted to be a loner or ...?

Robert Evans: No. That's what I am.

Greg Archer: What do you consider to be your biggest achievement?

Robert Evans: Staying alive. [Laughs] It's not easy. I've come from the depths of it--and with a threat to my health.

Greg Archer: And you're still in the picture. 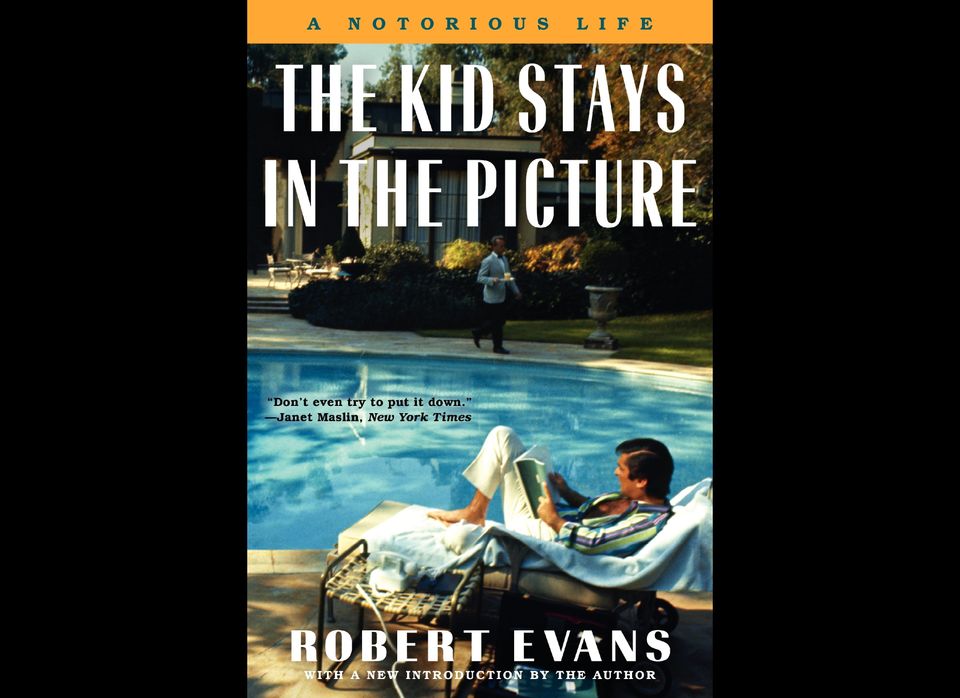 1 / 7
The Kid ...
Evans' memoir, "The Kid Stays In Picture," was recently singled out in Entertainment Weekly as being the No. 3 Hollywood tell-all of all time, surpassing of Katherine Hepburn and Dominick Dunne's memorable work. The new edition, which was just released, features an extended introduction, a new afterword and an excerpt from Evans' forthcoming "The Fat Lady Sang." Photo: Harper Collins