Emoticons might not be an invention of the computer age. They might be stowaways from a clever 17th century poet.

It all depends on your interpretation of this poem published in 1648 by Robert Herrick.

Levi Stahl, writer and promotions director at the University of Chicago Press, stumbled upon a :) while reading a volume of Herrick's work. Stahl went on to blog about his incidental discovery.

"In reading some of Robert Herrick's poetry last night, I discovered what looks to be the first emoticon!" Stahl wrote. 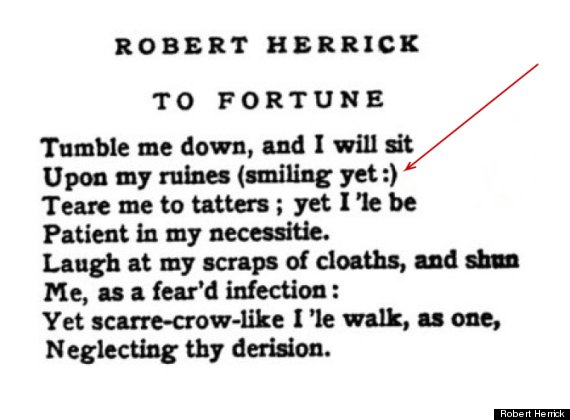 The last two characters on the second line do appear to be our modern smiley-face emoticon. And they appear right after the phrase "smiling yet."

This isn't the first time such an emoticon/typo has been found. A few years ago, a similar punctuation within a parenthetical was discovered in the transcript of an 1862 speech delivered by Abraham Lincoln, of all people. That winking emoticon, the ;), too was preceded by a suggestive phrase, "applause and laughter."

Stahl acknowledges that the poet's alleged emoticon could well be a typographical error. So in the interest of covering his bases, he dug a little further.

"Lest it be an aberration in the edition I own, I checked it against the new, authoritative two-volume edition of Herrick's work edited by Tom Cain and Ruth Connolly and published by Oxford University Press last year," he wrote. "The emoticon is there."

But the jury is still out. Alan Jacobs of The New Atlantis believes that Stahl's conclusion is "ahistorical."

So it’s possible, I’d say likely, that the parenthesis in the poem was inserted by a modern editor. Not that parentheses weren’t used in verse in Herrick’s time — they were — but not as widely as we use them today and not in the same situations. Punctuation in general was unsettled in the seventeenth century.

If it turns out that Herrick's smiley face is just a typo, we'll have one reaction: :(