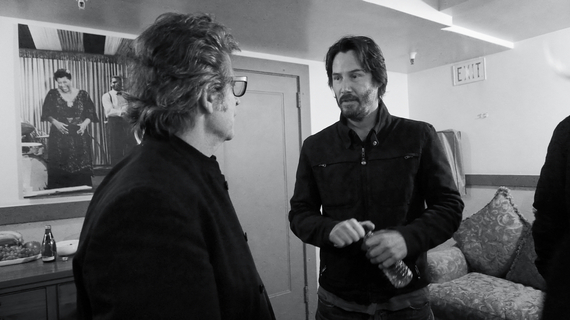 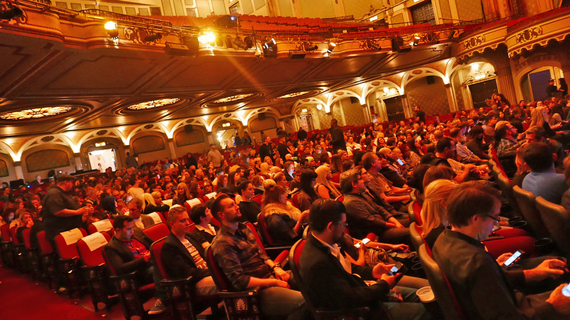 Crowd gathers at the Orpheum for the Longo/Rollins talk. Photo by EMS.

In their continuing series of live streaming art talks, The Broad held another public conversation (Un-Private Collection) at the Orpheum Theatre in downtown L.A. The one hour talk was between renowned artist Robert Longo and musician and writer Henry Rollins. 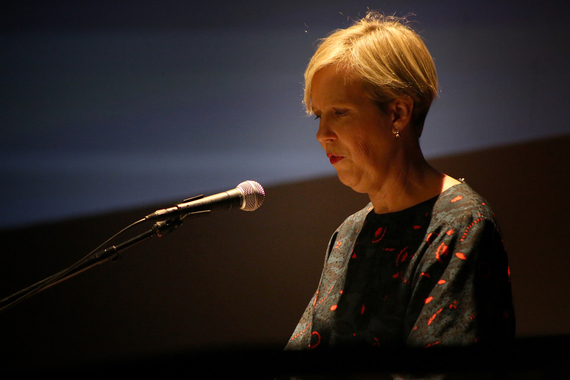 The Broad began The Un-Private Collection in September 2013. The talks showcases artists in their collection, paired with cultural or entertainment personalities that hosts or emcees the event. past conversations have included Jeff Koons with John Waters, Eric Fischl with Steve Martin, John Currin with James Cuno, and Joanne Heyler, and Paul Goldberger. The live talks are held in venues throughout Los Angeles and off-site of the The Broad Museum in downtown Los Angeles. 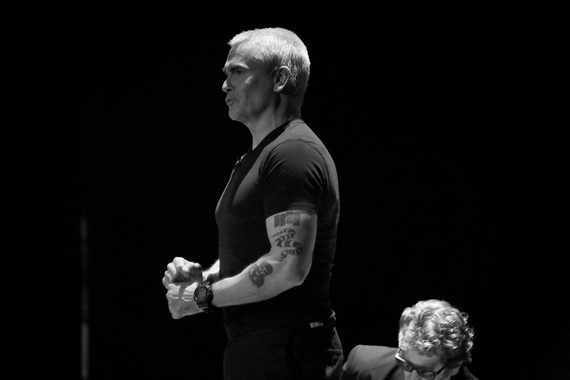 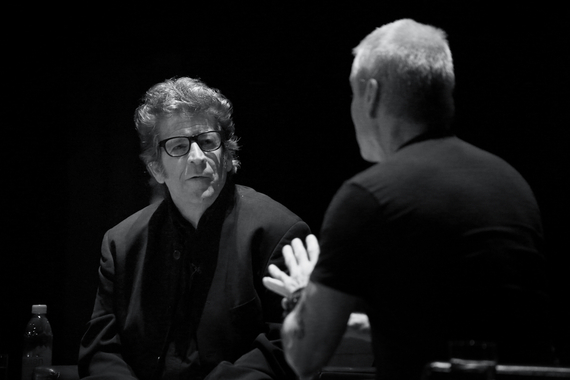 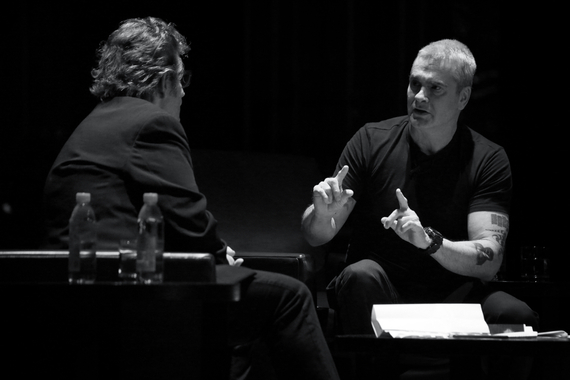 The pairing of artist Robert Longo and musician/journalist Henry Rollins makes this the eleventh edition. The Broad describes the pairing as "Longo marries the power of photographic and filmic images with large-scale artworks that often escape categorization as strictly painting, sculpture, or media art. "My work exists somewhere between movies and monuments," Longo says. He explores the importance of images in popular culture and the stereotypical portrayals of the individual's alienation within a complex society. His aesthetic and conceptual approach came to symbolize the changing landscape of 1980s New York City--with its rapid gentrification, vibrant nightlife, and ascendant stock market." 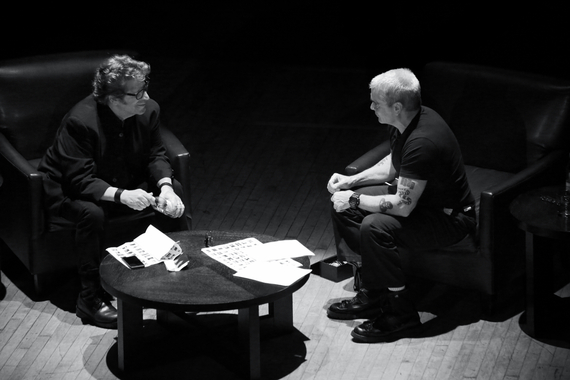 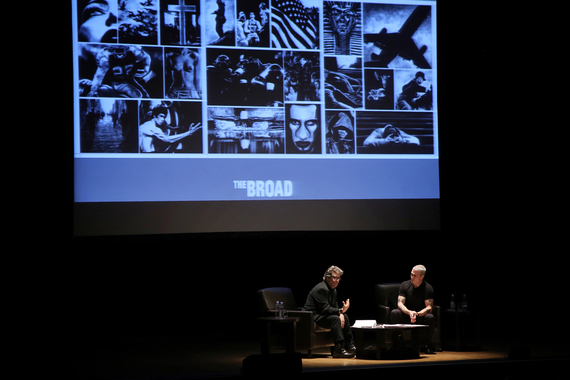 They discussed Longo's large charcoal drawings and his motivations for producing large graphite works of sharks with mouth agape, nuclear mushroom clouds, soul crushing ocean waves, policemen in riot gear, ominous football players and children sleeping. The most memorable moment came when Rollins asked Longo how he drew the thousands of individual heads in his monumental "Untitled (Mecca)" piece. Longo admitted he had artist assistants doing the work that received gasps from the crowd, a normal studio practice of artists fortunate to work at Longo's work scale and production level. Moving moments in the talk when Longo displayed images on the theater screen of Mecca in Saudi Arabia, St. Peter's Basilica in Rome and the Wailing Wall in Jerusalem. 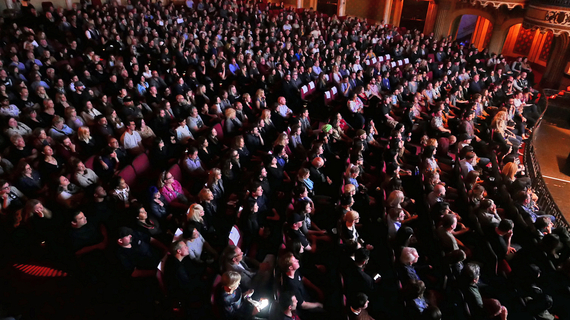 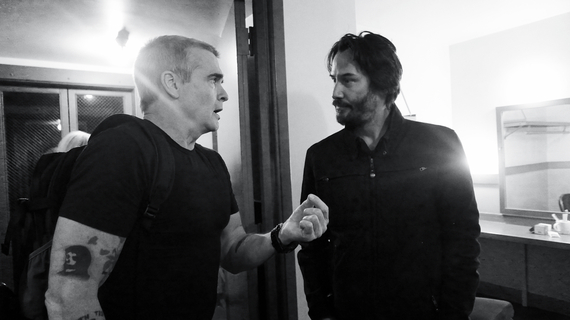 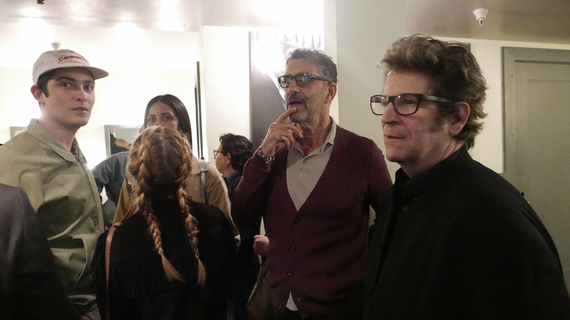 Look towards The Broad unveiling more Un-Private Collection talks throughout Los Angeles on their website. There is a small fee to attend, but each talk is broadcast live on the internet and archived on its website. The talk can be seen here on Youtube:

This article is part of an ongoing photojournalism survey of art exhibition openings titled EMS N(art)rative. Through my lens I document a photographic essay or visual "N(art)rative" that captures the happenings, personalities, collectors, gallerists, artists and the art itself; all elements that form the richly varied and textured fabric of the SoCal art world. This reconnaissance offers a unique view for serious art world players to obtain news and information on the current pulse of what's in the now, yet capturing timeless indelible images for posterity and legacy. Here is EMS N(art)rative Thirty-Eight.