A distraught wife is asking for help tracking down her husband, who has been missing for about three months.

Ida Mayer of Dix Hills, NY, says her husband of 18 years, 46-year-old Robert Mayer, has not been seen since June. His vehicle has since been located, but to date he has not been found and the circumstances of his disappearance remain a mystery.

"I just don't know what to do to find him. It gets harder every day. Our kids went back to school Monday and it's been very difficult for them. Their dad is always a part of everything. We're so worried about him," Ida Mayer told The Huffington Post.

Mayer last saw her husband when he left for work on the morning of June 14, in his red 2004 Pontiac GTO. A certified electrician, Robert Mayer was working at a newly built theater in Fort Greene, Brooklyn.

When Robert Mayer failed to return home, his wife reported him missing to police. The following night searchers found his GTO abandoned in the parking lot of the Long Island Rail Road's Deer Park station. The keys were not inside the vehicle and according to Mayer's wife, the driver's seat was adjusted much farther forward than her husband typically kept it.

"The police searched with dogs," she said. "Unfortunately, there are no surveillance cameras at the station, so they searched along the train tracks and the edge of property but nothing was found."

Authorities later discovered Robert Mayer had stopped at the Arrow Scrap yard in West Babylon on the day of his disappearance to cash in scrap metal. Video cameras at the business show he stopped there at about 2:15 p.m.

"In the scrap yard surveillance photo he looks like something is wrong. His looks worried and the look on his face haunts me," Ida Mayer said.

Roughly one week after Robert Mayer disappeared, one of his neighbors discovered the missing man's car had been captured by his security camera on the afternoon of his disappearance. The video does not show the inside of the vehicle, but it does show the car pulling into the Mayer's driveway at about 2:40 p.m. The vehicle leaves approximately 10 minutes later. Mayer’s wife is captured arriving in her vehicle at about 3 p.m.

The neighbor's video footage prompted Mayer's wife to search their home for clues. In a drawer, she found his cell phone, wallet and about $300 cash. All of the items had been with Mayer on the day of his disappearance, suggesting he or whoever had been driving his vehicle had placed them in the drawer. However, the fact that the items were found in the drawer is not particularly unusual, as his wife said it would not be abnormal for him to place those items there at the end of a work week.

"I just know something's wrong," Ida Mayer said. "He didn't just pick up and go. If that was the plan then why come home? What would the reason have been? I usually would have been home at that time, I just happened to be at my moms. Nothing is missing. Everything is here. He just had the clothes that were on his back. He has sleep apnea and even his breathing machine is still up by the bed."

A Suffolk County Police Department spokesman told the Long Island Press that authorities have no indication of foul play in Robert Mayer's disappearance. Until they have "concrete evidence" suggesting otherwise, they will continue to treat it as a missing person case, the Press reported.

The "concrete evidence" that police seek is in the details, according to Mayer's wife.

"I can speculate until the cows come home, but I know he had a really nervous energy about him in the days before he disappeared," she said. "The kids were studying for finals at the time, so all my focus was on them."

Ida Mayer added, "He would never leave on his own. His home was his castle. He built it. He was a big part of his kid's life. It would not be normal behavior for him. He was a member of Local Union 3 (the International Brotherhood of Electrical Workers) for almost 25 years. He's got a benefits and a pension. You don't work your whole life for these things and then walk away from them."

Robert Mayer is described as a 6-foot 1-inch white male, weighing about 200 pounds. He has brown hair and green-hazel eyes. He was last seen wearing a gray polo-type work shirt with a J.C. Electrical logo, light blue jeans and black work boots. His left middle finger is missing the tip.

"We're so desperate to find him," Ida Mayer said. "I miss him, his kids miss him and we just want him back."

Anyone with information is asked to contact the Suffolk County Police Second Squad detectives at (631) 854-8252. Mayer's family is offering a $10,000 reward for information that leads to his discovery. For more information, visit www.helpfindrobertmayer.com. 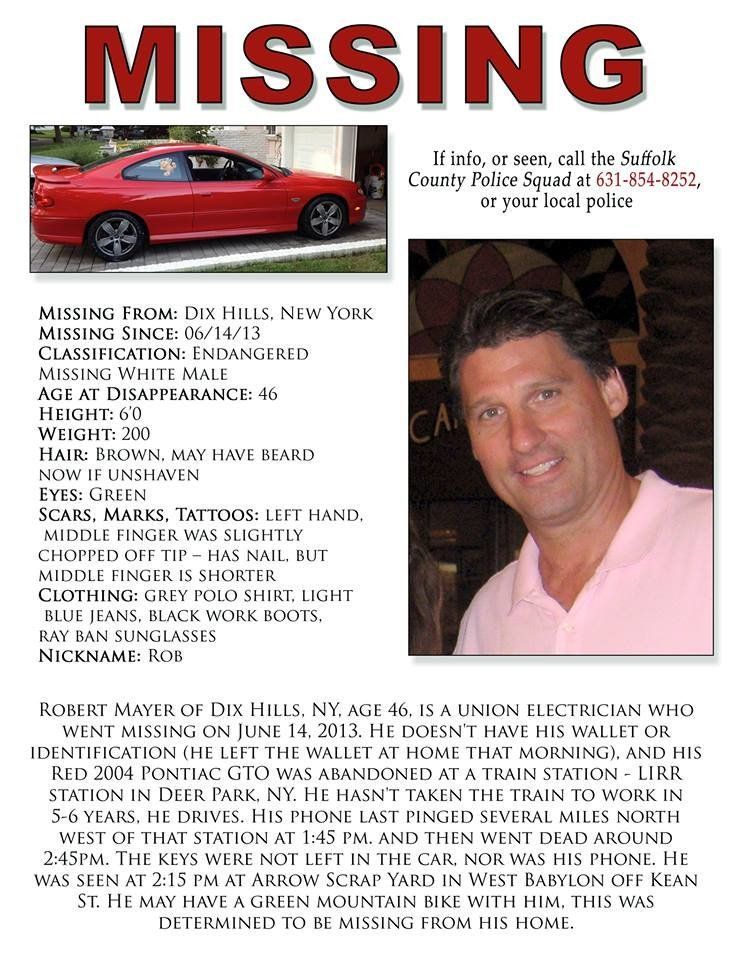