"The spectacle of advertising creates images of false beauty so suave and so impossible to attain that you will hurt inside and never even know where the hurt comes from, and in all pictures now the famous people have already begun to look lost and lonely." It is hard to pin down just where Robert Montgomery's words are coming from -- it seems as if they were whispered from a looming spirit, while simultaneously erupting from your insides. While advertisements talk loudly while communicating very little, Montgomery's pieces speak softly while uttering what we may need to hear most.
Scroll down to see a slideshow of his images.

The Scottish artist installs poetry in unexpected urban sites, often illegally covering up billboards with his stripped down white-on-black text. Others are made of lights or even lit on fire, adding a ghostly air to the lonely public spaces. Some of his poems comment on the ways capitalism has created a paranoid public in which we live in a flood of images detached from our world and ourselves.

Montgomery's work is inspired by detournement, the Situationist practice of hijacking ad space. It is hard to read an article about Montgomery without seeing the name Guy Debord pop up -- the man who predicted capitalism would create a society where spectacle overtakes reality. Anyone who has been following the current MOCA debate knows where this has been going. In order to learn more about his work, we reached out to Montgomery, who also serves as the publisher of Dazed and Confused. 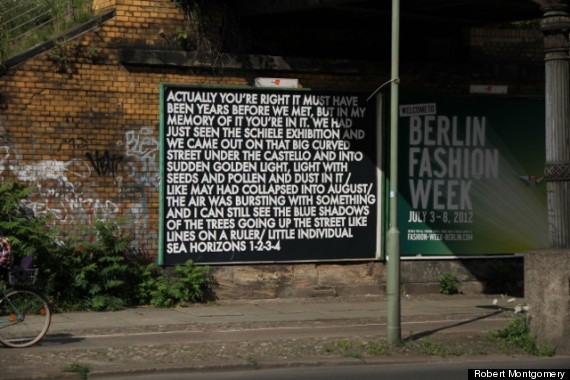 HP: Your work has helped start the movement of graffiti combating advertisements. What do you think of artists like Kaws who take a more playful approach to advertising, interacting with it rather than fighting it?

I don't think my work has started that movement at all. I think that's just what a couple of newspaper articles have said this week. For god's sake Jenny Holzer has been making work like mine since the early 1980s! There's a couple of very recent articles like this one that say my work has started the Brandalism movement, and while I'm thankful for that compliment I really don't think I can take the credit- the artists in Brandalism have all been doing their work individually for a while, and I'm just another artist in that show, and very happy to be included in that show with them.

What do I think about artist like Kaws? I hope I've just answered that question- I feel happy and proud and quite excited to be sharing a platform with street artists/graff background artists at this point, and I'm very happy to stand shoulder to shoulder with them.

HP: Do you think conceptual art and street art are closely related? If so, how?

RM: I think they are closely related in moments, and I do think it's true is that in this moment (the Brandalism show for example) you have work like mine, which has an academic/conceptual art background sharing an equal platform with work that comes from a pure graffiti/street art background. And that's interesting because that probably hasn't happened enough. It has happened before though- interestingly, it did happen around 1980 when artists like Jenny Holzer and Jean Michel Basquait shared a platform with graffiti artists like Futura 2000 and Rammellzee- around the time of the Real Estate Show and the Times Square Show in New York. I think it happens in moments when artists feel politicised and I think due to movements like Occupy we might be in a moment when artists feel politicised again, which I think is really exciting.

HP: Do you see a schism between your role as artist and as publisher of Dazed and Confused? How does one role nourish the other?

Hmmm, people seem unusually interested in the day job I've had. I don't see a schism at all really, helping publish Dazed has been my day job for a long time, and being an artist has been my night job for a long time and I've worked really hard at both of them with no embarrassment 'cos, as Patti Smith would say, we're workers in my family. I might talk fancy, but I'm not some kind of trust fund bohemian you know.

My footnote, and the moral of the story, is this- the next time you go to dinner on Sunset or whatever don't disrespect the waitress who is also an actress, cos they might turn out to be a really good actress and one day you'll wish you got them to sign the cheque so you could stick it on your wall and prove to your friends you met them. My answer to the second part of that questions follows the same logic- Everything nourishes everything, and hard work nourishes you.

HP: What is your involvement with the Occupy movement? What role do you see art playing?

RM: It's really that I've been volunteering some of my time to them. I'm quite humbled by the Occupiers I know and happy to see the positive force of Occupy come along. There was an organic exchange between us really, I wrote about them in a billboard piece I did in London in February, "A LITTLE ROW OF TENTS IN FRONT OF THE CATHEDRAL GUARD OUR FUTURE" and they picked up on that line and put it on their own banner when they put tents down in front of the Bank of England. That exchange was very nice and I offered to work on some billboards with them, simple billboards that could communicate their positive message. The first of those just went up in Bristol. I think other artists could do what I'm doing and offer to help, the movement is very open, and they are very intelligent, positive and committed people.

HP: Your visual style is very minimal, in stark contrast to the visual overload we see in advertising whether on a billboard or computer screen. How did you make the decision to strip down your work into essentials?

RM: I wanted to make billboards that look like Concrete Poetry I think. To take the theory of concrete poetry and see if I could make it work on a billboard. I also wanted to push the sort blank graphic style of text artists like Lawrence Weiner and see if I could make it a vehicle for a tone of voice that's closer to poetry, and then see if I could make all that work on a billboard. The ironic thing is they do work as billboards partly because they break all the rules advertising creatives will tell you about how to make a good billboard- they'll say you have to have a sexy image and/or a funny strap line that people can read in 7 seconds or they won't work. But that's nonsense of course because people aren't babies.

HP: Your poems have a sort of ease to them, as if they just popped into your head. How long does it take you to come up with a message? Are they carefully crafted or just beautiful accidents?

RM: I think they're probably exactly half and half. Half carefully crafted -- I think about things like vowel rhythm a lot, the sort of vowel rhythm or "non-rhyming rhythm" that is a characteristic of modernist poets I love like Philip Larkin and Ted Hughes and Sylvia Plath. So half carefully crafted and half left alone enough so they still sound like the voice of a person. I do write the texts, often late at night, when I feel like I want to scream or cry, and then I go back and refine them a bit, but not too much. I try to stop myself from refining them too much. Also if you notice they're almost in two different kinds of voice- one should be like a voice that comes from the collective unconscious, one should be like voice that comes from one person- a single voice internal monologue, and a collective voice internal monologue. The idea of a "collective voice internal monologue" is an idea I like a lot.

Robert Montgomery's Echoes of Voices in the High Towers will show at Berlin's Tempelhof Airport until October 1. Do Montgomery's poems resonate with you? Let us know your thoughts in the comments section, and see a slideshow of the work below. 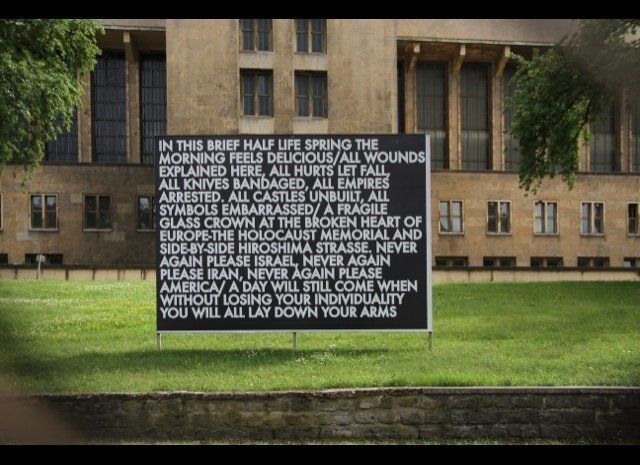