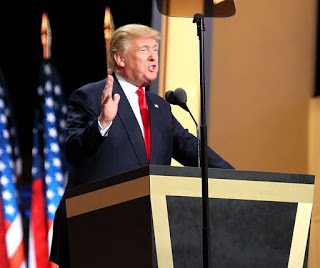 Only in the venerable Times Literary Supplement are you likely to find a letter to the editor in which a reader compares Donald Trump to the character of Moosbrugger from Robert Musil's The Man Without Qualities. Moosbrugger, it should be noted, is a violent criminal who is brought to justice. Here is the passage as quoted in a letter to the TLS by David B. Auerbach of Brooklyn, NY:

"{Moosbrugger} was clearly ill, but even if his obviously pathological nature provided the basis for his attitude and this isolated him from other men, it somehow seemed to him a stronger and higher sense of his own self. His whole life was a comically and distressingly clumsy struggle to gain by force a recognition of this sense of himself...To the judge, Moosbrugger was a special case; for himself he was a universal, and it was very hard to say something convoluted about a universe."

Musil wrote The Man Without Qualities (Der Mann ohne Eigenschaften), during the fall of the Weimar Republic and the rise of Hitler and the novel itself takes place in the last years of the Habsburg rule. Too often the rage at Trump itself is self-defeating in its perseveration, making, as it does, the same boring points about his afflatus. It's curious when literally any historical figure is decontextualized. Is Trump really sui generis? Have we not seen Trump like figures, motivated by Trump like forces at other periods of turbulence when masses of the unemployed and disenfranchised seek an autocrat who will take the responsibility of existence itself away form them. The TLS has done a great service in publishing Mr. Auerbach's letter with its Mitteleuropaische profundity and complexity to the discussion of Donald Trump's attributes or "qualities" if you will. Hegel talked about the World Historical Figure. Napoleon was one example he gave. Would Trump qualify? To call someone a product of historical forces is not necessarily to make a judgment about the value their contribution.