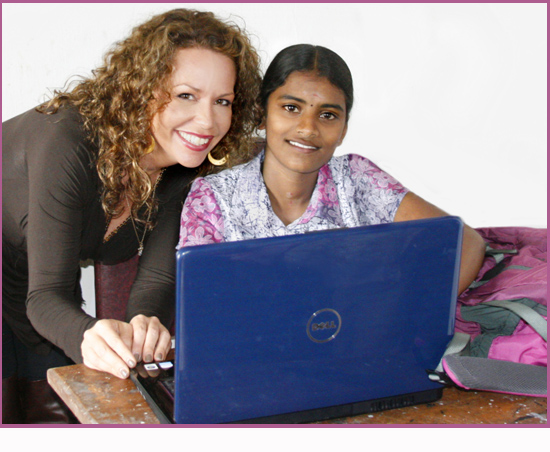 Durga, the daughter of a tea worker and "plucker," lives in the Idulgashinna Tea Estate community on the island of Sri Lanka. Like most teenagers, Durga has dreams. She wants to be a software engineer, and she has the talent, drive and discipline to excel in her chosen career. She's also blessed to have a strong educational foundation. Without basic computer skills, however, she cannot gain entry into college.

I talked with Muzyka recently about the project's genesis and future.

Why did you choose to help girls on this tea plantation?

The Idulgashinna Tea Estate is a magical, visionary place. It was the first Fair Trade-certified and the first biodynamic tea estate in the world. Most of Zhena's Gypsy Tea is sourced from this estate, and I am very grateful to work with them. I was married there, and the people are like family to me. It is truly a blessing to have been invited by the creators and caretakers of this tea estate, and it's a gift to be given the opportunity to share the bounty and to benefit from it in my business.

And a lot of basic infrastructure is in place because of Fair Trade practices. The children receive a strong educational foundation, which gives them a critical head start we can build on. They also built an initial Computer Learning Center project, which has a full program with a graduation and a certificate.

In developing countries, more often than not girls are not given the same opportunities for education as boys are. The boys have access to these laptops too, but our goal is gender equity, and right now the imbalance is unacceptable to me.

What's the story behind the name?

Gerard and I were married in the tea estate, and the next day some of the kids said, "Hey, you're Robin Hood and Lady Miriam." When we asked why, they said, "You sell tea to the rich and give the money back to help the poor." From their perspective, everyone in America is rich. It broke my heart, but from a kid's point of view it was clean and clear and inspiring.

Nisha, a woman I've known since she was a young girl, was the first to graduate from the Computer Learning Center project. She was a manager on the plantation, and now she's working for an NGO in Colombo. Not long ago I was visiting the estate and Nisha showed me something extraordinary. The community had chosen to invest their Fair Trade dollars in their children's future by creating a Computer Learning Center for them. However, they had only three computers for 530 children. So immediately I started thinking, how are we going to get all those kids educated so they can be like Nisha when most of them have never seen a computer? And when I came home to California, it dawned on me. I said to myself, "We have three laptops right in our household that we aren't using. What if we collected used laptops, refurbished them, then made them available for the children to check out like library books?"

How does the Robin Hood Laptop Project help?

We're providing girls with laptops and tutoring so that they can go to university. We're buying new hard drives for them, but basically we're refurbishing hundreds of donated, secondhand laptops and teaching them how to use them really well.

What are they learning?

At age 10 they learn basics, then we teach them advanced computer programs. They're learning Adobe Photoshop, CAD (a drawing and architectural software system) and Microsoft Office suite, including programs like Excel. Some will even start learning programming in Java before they graduate. We have three classes and a formal after-school schedule. The younger kids come after grade school, and the high school students come by bus.

And this gets them past the gatekeepers?

Yes, and it also gets the gatekeeper's attention, which is important. We need that because these kids can only go to school through scholarship. When they test for basic computer proficiency, these kids won't just pass; they'll blow the gatekeepers away with all their extra skills.

The video on the website (and also below) is poignant. That's Durga, right?

Yes, that's Durga. We followed her around from the time we gave her the laptop through the testing and acceptance into college prep classes. The video is great because it really shows the effect something as simple as donating an old laptop can do for someone's life. Durga starts college next fall semester. If someone has 10 laptops to donate, that means 10 more girls like Durga will have a chance to go to college. What's exciting is that now all the surrounding villages want their children to come, and we can do that. We just need more laptops! 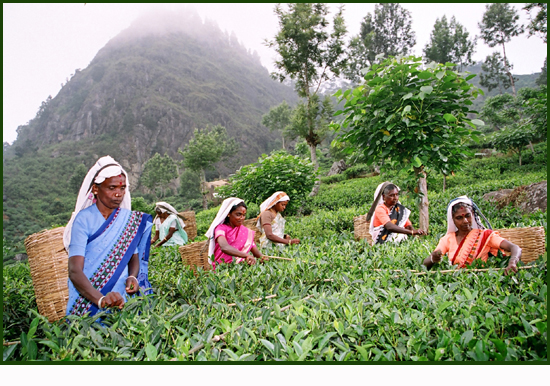 Durga's mother is a tea worker and '"plucker." What is plucking?

Plucking is how you pull the tea leaves off the stalks. It is a long, full hand-followed-by-arm-over-shoulder movement, one side then the next, all day every day until your basket is filled with tea leaves. An average tea worker makes a buck thirty-five a day and has to harvest a minimum of 8 kilograms in order to get that. It takes 16,000 individual plucks to hit that minimum. The average plucker has no other choice of income and an average of six people depending on her for food. It is hard and repetitive physical labor. Most pluckers are women, and they barely scrape by. Then when they retire, they have no savings and nowhere to go. But our tea program and partnership with fair trade gardens like Idulgashinna solves that issue, they get to own their homes.

How did Durga's mother feel about her laptop?

I think it would be fair call her response mixed. She had never seen a computer before Durga brought hers home. She was happy, bewildered and amazed all at the same time to see her daughter being as adept with the computer as she was at harvesting tea. This is a new paradigm for her. She is very grateful, but like all evolution, this is new. She's learning how to be comfortable with such a big change. It is especially hard for her to adjust to the idea that her daughter will be going away. Our hope is that Durga will return to set up more computer learning centers for other tea gardens and children.

Have you partnered with any of the big technology firms?

Not yet--but that would be perfect! First we had to work out the logistics, which we did in the pilot program. For instance, they don't have electricity in a lot of their houses, so we had to figure out what sort of batteries we needed and how to boost up the life of those batteries. We also hired a fulltime IT manager to manage the program and care for the laptops. I won't even tell you his wage, but for him it is a solid, good living in the region. He does it all. If something breaks, he fixes it. He's motivated and resourceful in all the right ways. He's a great guy.

Will the program be offered elsewhere?

We wanted to develop a template for the program, and now that we've done that we can take it worldwide. We're already getting requests for the template from other nonprofits.

How can people help?

So many people have laptops they're not using anymore, and hard drives are so inexpensive now. A hard drive for a Mac is less than $100. There are some basic systems requirements for the laptops, and that's all on the The Robin Hood Laptop Project website.

Many people are inspired to create projects like this one. How do they even know where to start?

You start by asking: Is it relevant? Look around you. Are the children safe? Are they fed? Do they have clean water? Do they have medical facilities? Do they have a roof over their head? Is there a school?

Photo ONE: Zhena Muzyka, founder of The Robin Hood Laptop Project, shows Durga, a student in the Haputale, Uva district of Sri Lanka, a laptop that will change her life.

Photo TWO: Sitharavel Durka's mother is a tea plucker on the Idulgashinna Tea Estate community on the island of Sri Lanka. She makes about $1.35 per day pulling tea leaves off stalks, and she's pleased that her daughter might be able to avoid this hard and repetitive physical labor by getting a higher education.