Throwing street art conventions to the wind, visual phenomenon Robin Rhode is an international force to be reckoned with. He has the mentality of a performance artist and the determined execution of an Old Master, creating urban dreamscapes that involve just as much two-dimensional imagery as they do choreographed movements.

This month, the South African-born, Berlin-based artist is taking his multi-media creations across the pond, presenting two exhibitions at NYC’s Lehman Maupin Gallery. One part photography survey (“Take Your Mind Off The Street”) and one part site-specific installation (“Paries Pictus”), the project also involves the participation of a local youth education program. Read on for what Rhode had to say about his US invasion...

HP: Why does this project matter?

RR: It matters because it brings contemporary art and the process of making contemporary art to young people, in this case the youth at Time In. Through this project, the art becomes accessible to a group of children who are from a disadvantaged community. This is really why it matters. We have young people having a chance to engage with art, to become part of a greater process, and part of an exhibition.

HP: Who or what was an early influence on your work?

RR: I would say, in terms of appreciating or understanding performance art, I would go with Vito Acconci. His work allowed me to understand the presence of the body in the urban realm. That the art could not only be painting or sculpture -- static objects -- but it could also be the presence of the body in the environment and the dynamics of that environment on the body. In early performances where he follows strangers around the city, he’s engaging in the urban experience and the documentative nature of it was really, really great. I could somewhat align my self with that in terms of placing myself in the framework of performance and adding aspects of drawing later. Vito was a trigger to understanding this.

HP: What were the lowest/highest points in your career so far?

RR: I would say that a high point was my collaboration with the pianist Leif Ove Andsnes. I designed the stage and the visual component of his solo performance, creating around the music of Mussorgsky. It is probably the intention of most artists not to be pigeonholed into one particular mold, and being a part of this world tour I took my art into a new audience. It was extremely intense to see my body of work unravel, and to collaborate like this was probably the highlight of my career.

But it was also the low point. It was a project that I believe received very limited exposure. It was almost as if this massive world tour was invisible within the context of the contemporary art world. Part of the intensity of the experience was not having the art world support me in that moment. And it received scathing reviews from the classical world. I was thrown to the deep end of the classical music world and to receive this negative criticism from people who don’t visit art exhibits. It's just like asking a contemporary art critic to write on classical music.

HP: What are you obsessed with right now?

RR: Right now I am obsessed with preparing for my exhibitions. Every corner of the gallery space. I study them before the installation. Lighting, height, tonality, color. I even package and wrap my own art when I am sending it to a gallery because I am fascinated with how the pacakge looks when it arrives. Maybe it's because I have lived in Germany for so long, and I'm used to German analytical thought and the idea of absolute preparation. Or maybe it's because my father is an engineer and his planning and drafting is beginning to influence me in some way. But that is my obsession at the moment.

HP: How would your childhood art teacher describe you?

RR: I never had one. I think with my parents, I drove them crazy. I tried to convince them that being an artist was the only the thing that I wanted to do. I was willing to sacrifice and willing to go to extremes, so eventually the people had no choice but to support me. And I gave my high school teachers a very hard time. I struggled so much academically because I didn't have the creative balance. I became out of control because I didn't have arts and culture available. This was South Africa in the 1990s and there was a high level of corporal punishment. So I would be beaten, yet the same teachers that did that were later the same ones to give me drawing pads and tracing paper, because they knew that this kid was obsessing over this drawing thing. We can beat him as much as we want, but he's going to keep making art.

Robin Rhode Is ON OUR RADAR: South African Street Artist Is Serious About His Work (PHOTOS)
Robin Rhode 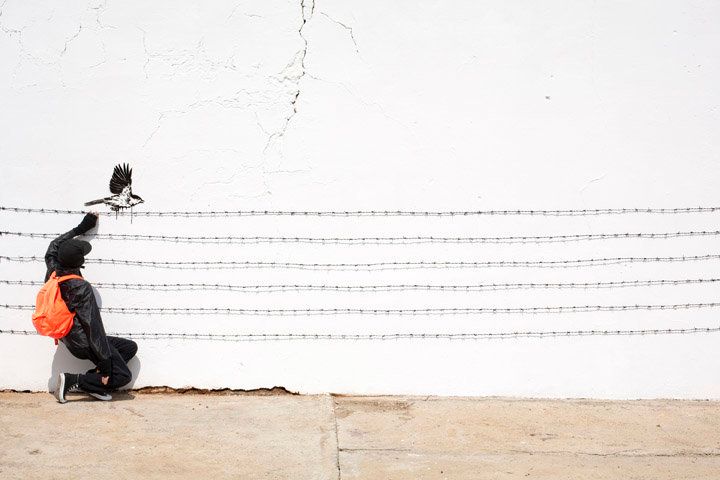