Robin Roberts spoke about how her battle with breast cancer has changed her in an interview with Ladies Home Journal.

The "Good Morning America" co-anchor was diagnosed with breast cancer in 2007. Since then, she has shared her experience with viewers, becoming a spokesperson for awareness.

Speaking to Lee Woodruff, who is married to ABC correspondent Bob Woodruff, Roberts expressed that surviving cancer gave her a different perspective on her career.

She said that she has learned to take her work in stride, recalling not being able to report from Japan after the earthquake earlier this year. "If I don't get the interview I accept it," she said. "I think there is a fine line between being passionate and still being competitive as a journalist and I think I've found it."

Roberts also emphasized that hospitality has always been important to her, even in her work as a journalist. She recalled a recent interview with Sarah Ferguson, who Roberts said cried because she was so nice to her. "I sometimes get accused of being soft as a journalist, but I believe you don't have to grill people to get the best answer out of them," she said. "You can still be nice and be fair."

When asked if she ever worried that her cancer would take the spotlight rather than her journalistic accomplishments, Roberts insisted that she did not want cancer to define her. "That was one of the initial reasons I didn't want people to know about it -- I didn't want it to be the focus of conversation," she recalled. "I wanted it to be a chapter in my life story, not my life story."

Photo of the cover: 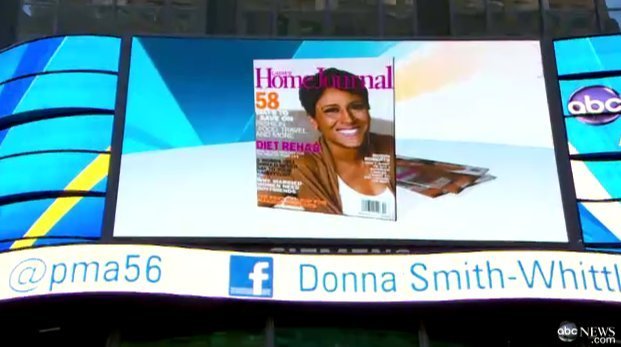