Robin Williams once joked that death is "nature's way to let you know that your table is ready." It's not funny now that the comedian overrode nature by grabbing the table without waiting for the maître d'. But if his suicide has any silver lining, it's that depression and mental illness are now being talked about more openly.

In far-flung India, China and Vietnam, where mental illness, especially depression, is a taboo subject, it is now on the front pages of newspapers and TV programs reporting on Williams' suicide.

Born in Chicago, Illinois, to a father who was an executive for Ford Motor Company and a mother who was a model, his was a childhood among toys. He grew up privileged but reportedly lonely. An overweight and bullied child, Williams played alone in a large home, and no doubt his loneliness and sadness lent themselves to invention: the need to occupy others' lives via the act of mimicking, via the act of imagination.

So much so that it became a habit, a shield, and eventually a vocation -- and his was a kind of talent that hid his own sadness by making others laugh. As a testimony to his down to earth and friendly personality, but also his ability to mimic, a Vietnamese-American friend of mine who once worked as an extra on the Good Morning Vietnam set testified that, "We had a lot of down time in between shooting in the classroom scenes. Robin Williams would learn people's personalities over those six days and make fun of all of us based on that. I was in awe."

But of all things Williams could talk about, or make fun of, on stage -- from sex to violence, from politics to his own divorce, from his struggle with alcohol abuse to his open-heart surgery -- he didn't manage to name the thing that ailed him for what it was: a mental illness, depression. Even for one of the world's most eloquent public figures, the D word still left him tongue-tied. Saying that he was "bummed out," in an interview with Terry Gross on Fresh Air seemed as close as he could manage.

According to the National Institute of Mental Health, "In 2012, an estimated 16 million adults aged 18 or older in the U.S. had at least one major depressive episode in the past year. This represented 6.9 percent of all U.S. adults." And that major depression is the most common mental illness that afflict Americans.

In Vietnamese there's a phrase that is used to describe a rare talent, someone who has a golden tongue: "Xuat khau thanh tho." It means to open one's mouth and out comes poetry.

Robin Williams didn't speak poetry but he spoke something more accessible in the modern world: the ability to provide humor at will, a rapid fire of comical ideas and observations that no script could match, taking on voices and personalities that seemed spun out of bright clouds. His was a genius rarely seen even among the best entertainers and comedians, and it brought joy and laughter and admiration for the millions. 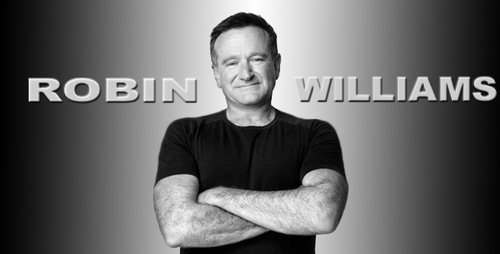 If genius is the ability "to carry the spirit of the child into old age, which mean never losing your enthusiasm," as Aldous Huxley once observed, it seems to be a good fit to describe Williams' man-child persona. But F. Scott Fitzgerald's definition of genius may have come closer to capturing what Williams' gift was all about: "the ability to put into effect what is on your mind."

Williams' many observations delighted the world. On Clinton's Monica Lewinsky affair: "God gave men both a penis and a brain, but unfortunately not enough blood supply to run both at the same time." On Canada: "...like a loft apartment over a really great party." On his own open-heart surgery and why he afterward would cry at the drop of a hat: "I do not feel they gave me a new valve but a tiny vagina. I do not know. I'm just so emotional these days."

But there's often a steep price to genius. For Williams it came along on an energy driven by what seemed to be mania, and the down time of which, no doubt, was an overwhelming darkness.

But if not curable, it is treatable, with diligence. To do so, however, means breaking the silence about depression, owning up to the disease and seeking help, and sharing one's story. Alas, even for a man with a golden tongue, it's the one thing he couldn't articulate.