'In such ugly times, the only true protest is beauty.'
Phil Ochs


As I listened to Tom Paxton's "Phil," a paean song for his friend and colleague Phil Ochs, I immediately thought of Robin Williams. "I opened the paper, there was your picture/Gone, gone, gone with your own hand/I couldn't believe it, the paper was shakin'/Gone, gone, gone by your hand. I know I'm gonna spend the rest of my lifetime wondering why/You found yourself so badly hurt you had to die." Phil Ochs, one of the true singer-songwriters of the 1960s, hanged himself at his sister's Far Rockaway home on April 9, 1976. Robin Williams, the comic genius and accomplished actor and humanitarian, also committed suicide 38 years later on August 11, 2014, at his home in Paradise Cay, California. These two men shared the oft-times lonely and melancholic roles of lifting up the human condition through their art, even if it meant sacrificing their own lives.

During his career, Ochs performed hundreds of his songs at many political events, including anti-Vietnam protests and civil rights rallies, as well as at student and organized labor events. Many of Ochs' closest friends and family said he might have battled bipolar disease even before it was recognized or known how to be treated. As the 1960s wore on, Ochs would grow increasingly disenchanted by politics in the United States. This was an individual who not only wrote seminal songs like 'I Ain't Marchin' Anymore,' 'Ballad of Medgar Evers' and 'There But for Fortune,' but also proved his mettle on the front-lines with Abbie Hoffman and Jerry Rubin. "Phil was tireless. I don't think he ever said 'no' to a political rally or protest concert," penned Paxton in 2009. "I know that every time I appeared at a rally or a teach-in, Phil would also be there."

There But For Fortune, Kenneth Bowser's 2010 film, chronicled Ochs' life and career, which many believe had been eclipsed by the meteoric rise of his folk singing competitor Bob Dylan. Most interesting about the documentary is it shows Ochs' impact was felt way beyond the musical community and into the political and journalistic realm. "I realized there was a difference between those who liked Bob Dylan -- everyone liked Bob Dylan, it's easy to like Bob Dylan -- and those who even know about Phil Ochs," recalled the late journalist Christopher Hitchens. "There is [also] a difference between being a '60s person and a 1968 person," a nod to the fact that Ochs grew largely disenchanted following the violence outside the Democratic National Convention where the Chicago Police Department had beaten protesters. Ochs was also instrumental in founding the Yippies leading up to the Convention. 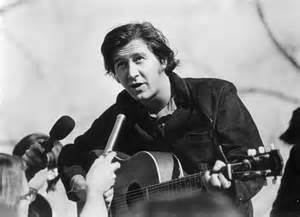 It is worth comparing Ochs' life to Robin Williams, since both artists were filled with authenticity, passion, love and idealism for a better society. In theatrical terms, they defined the tenets of catharsis and pathos. The former describes the process of releasing, and thereby providing relief from strong or repressed emotions while the latter is a quality that evokes pity or sadness. While Williams clearly was renowned for his firebrand humor, his commitment as an actor was largely unparalleled. There is a sadness, yet sweetness in Paul Mazursky's Moscow on the Hudson where he portrayed Vladimir Ivanov, a Russian saxophonist who defects in New York City. Freedom is too important. "I always thought Robin was a genius with a sidecar," said friend and fellow comedian Dennis Miller just days after his death. "People would float out of that room like all of a sudden they were on the existential tour for the night with the most existential tour guide in the history of the planet," Miller added.

It is most telling that Miller speaks to Williams' existential quality. Through his art, Robin Williams truthfully conveyed the angst, folly, sadness and humor, which lie within the human condition. One can witness such feelings in performances as diverse as Good Morning Vietnam, Awakenings, Dead Poets Society and Good Will Hunting. Even within his chilly performance in Christopher Nolan's Insomnia where he portrayed a villainous killer, Williams tapped into the universality of sadness and mental illness. This made his character not just believable, but relatable. 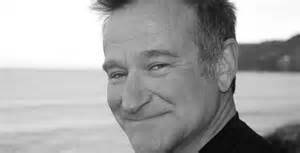 As artists Ochs and Williams were linked by their disenchantment to a society too bureaucratic, rigid and resistant to change. All great artists often serve as the antidote for the "bottom line" approach. In Dead Poets Society, Williams portrays John Keating, a freethinking poetry professor who wills his students to chart their own paths in life. It is not for society, or parents, to do that for them. "Gather ye rosebuds while ye may, Old time is still a-flying: And this same flower that smiles to-day To-morrow will be dying," Keating recites a poem by Robert Herrick. Williams' rendition of 'carpe diem' has been etched in movie lore.

Since Williams' death, I find it surprising that I have yet to see his life compared to Phil Ochs. Perhaps since Ochs' career never achieved the kind of success he often craved, even as his contemporaries were Joan Baez and Bob Dylan. At the 2013 Farm Aid concert, however, Neil Young performed Ochs' 'Changes.' Before Young began, he gave an introduction: "Life is short folks, we all know that. There is no time like right now... I was talkin' backstage how we lost this friend a long time ago because life is short. He killed himself... This next song... is by one of the greatest songwriters who ever lived." recalled Young before singing: "Sit by my side, come as close as the air/Share in a memory of gray/Wander in my words, dream about the pictures that I play of changes."

Since his death, much in the entertainment press have found it convenient to give Robin Williams the "sad clown" moniker. I find this both troubling and offensive. If one looks back on his life and career, one can see that he enlivened the human spirit through acting and by his life's actions. (Perhaps that is the sacrifice of a tormented soul, I do not know). Through his wealth and fame, Williams helped raise funds for and met with the poor and disadvantaged. He also stayed true to his friends. "As genius as he was on stage, he was the greatest friend you could ever imagine," Billy Crystal said at the Emmys. "It's very hard to talk about him in the past because he was so present in all of our lives. For almost 40 years he was the brightest star in a comedy galaxy."

Just one day after Williams' passing, the family of Christopher Reeve also recalled this "simple, steadfast friendship" the two men shared. "For Robin, our dad was Brother Reeve. Robin was a light in our family for as long as we can remember. He and dad made each other laugh and they stood by each other to the end. [Williams] knew how to make everyone laugh in a way that can lift spirits and lift their souls." Williams and Reeve were lifelong friends since studying at The Juilliard School together. It was revealed that Williams helped to pay Reeve's medical costs after paralyzed following his fateful horseback riding accident.

Again I turn to Paxton's song for solace to help understand why two great artists felt the need to commit suicide after giving the world so much optimism. "I heard that you were feeling stronger every day/I heard that you were well, with good things on the way/Then I opened the paper, there was your picture/Gone, gone, gone by your own hand."