You know it's been a long cold 8 years when people gingerly, timidly, and with trepidation begin to talk politics again. After all, it wasn't that long ago that we were told that either 'your with us or your against us.'

Happily, Robin Williams doesn't seem to be saddled with any of those fears.

At the TED conference in Monterey yesterday - Williams was a member of the audience until a taping of a debate on the BBC had technical difficulties. TED is a collection of scientists, artists, creators, that gather each year to list to the worlds experts and explore the future.

Robin Williams, from the back of the hall began to heckle the injured BBC tech team.

Williams impersonated a 'live' reporter, shouting that he"couldn't understand a fucking word" and then went on to ask "wondering why at a technology conference everything is running so shitty" .
The crowd roared. 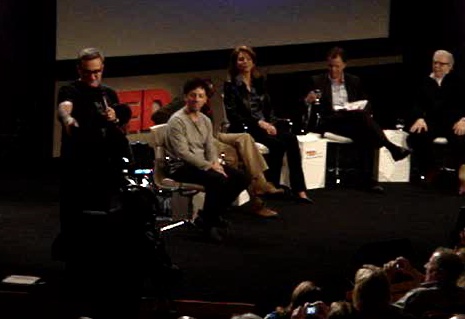 Williams ended up on stage - where he was on a roll. He joked that everyone in the audience with cell phones were recording and saying: 'I'm getting all of this!'" True.

He took on Apple - busting on a new product called "iWhy" and then turned his comic guns on Google, who's Sergei Brin was on stage. He said the Google campus was full of exercise balls - "which I think is how they're hatching new employees." 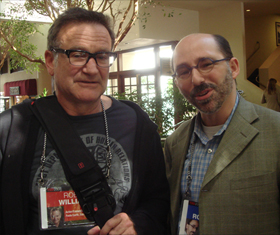 But it was out in the hall, once the tech problems had been repaired, that Williams dug into politics. He was fired up for the upcoming election saying "We've been Crying Wolfowitz for 8 years." Indeed.