This is the bro-iest robot we've ever seen.

The robot, which the company calls Versaball, can actually complete several other tasks, like changing light bulbs and holding sharp objects. But for the company's upcoming demo at the 2015 Consumer Electronic Show in Las Vegas, Empire Robotics will be focusing on what really matters: shooting Ping-Pong balls into plastic cups with a degree of accuracy that many college sophomores would die for.

Do not play this robot unless you are OK with getting smashed.

To pick up an object, the robot sucks air out of a ball-shaped "membrane," making a vacuum that conforms around an object. Then, Versaball can release the object by re-inflating the ball. The robot's creators found that when air is rapidly released into the ball, the object can go flying. Hence, beer pong.

Beer pong-playing robots aren't a new technology. Creative college kids have been building systems to help them with their game for years. And the gripping technology behind this specific system has also been around for decades.

But the company's cofounder, John Amend, devoted his Ph.D. research at Cornell to using the gripper in a commercially viable product, Product Manager John Dean told The Huffington Post in an email. Empire Robotics wants to put the Versaball to use in manufacturing and packaging, since it can easily grip large and heavy items like bricks, or small items like pills (or Ping-Pong balls). 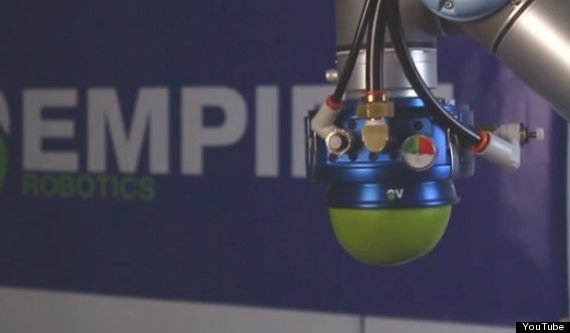 The gripper is a squishy membrane that can conform around objects.

To make the robot shoot Ping-Pong balls accurately, Dean wrote that the team adjusts it in each venue for air temperature and pressure. At CES, Versaball will be pre-programmed to hit the cups in a certain order. However, in case it misses, sensors in the cups will let the robot know which ones are remaining.

Yes, it can miss. Dean wrote that on average, the robot makes about eight out of 10.

On Tuesday, Versaball will face off against the winner of the World Series of Beer Pong. For the curious, they'll be playing six cups (not the standard 10), and it'll be dry.

"I think it will be a pretty even match in the human versus robot showdown, but robots don't feel pressure, nervousness, or adrenaline," Dean wrote.

Our on-the-ground technology reporter Tim Stenovec will catch the match and let us know who comes out on top -- robot or human.