"I'm completely operational and all my circuits are functioning normally."
-- Hal (2001, A Space Odyssey)

My eight-year-old daughter Odessa and I have a running disagreement about the best way to hold a pencil. She's working on her penmanship and doesn't consider my 50 years of experience as relevant. So last week when we finished assembling one of her holiday gifts, a robot, I wasn't surprised that the first thing she had it do was pick up a pencil. Odessa had a point to make: she's confident about her skills and, like Hal, so is her robot. 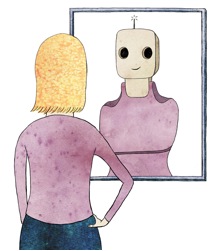 We're fascinated with robots because they are reflections of ourselves. Like the Girl with the Dragon Tattoo, the latest robots are using new technologies to solve problems in new ways. These robots don't rigidly follow orders. Instead, they use new sensors like the Kinect, parallel computation, and data from the cloud to learn from, cooperate with, and enhance human abilities. These robots are more aware than oblivious, more like companions than tools, and more social than solitary.

Artificial creatures date back to the ancient Chinese and Greeks. Renaissance automata were designed primarily to entertain, reflecting the value placed on leisure. In the 19th century, creatures such as Frankenstein's monster reflected our fears of science and industrialization. In the 20th century the term "robot" -- Slavic for "worker" -- was coined to reflect a growing interest in efficiency and productivity. The field of Robotics emerged to develop autonomous robots that could operate completely independently and separately from humans. Industrial robots were often installed in steel cages to protect human workers from accidental contact. One goal was the "lights-out factory" completely operated by robots: no lights would be needed because no humans would be needed. 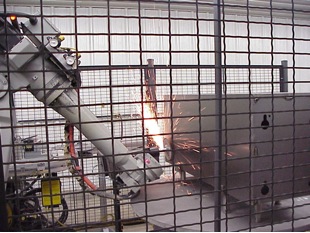 An industrial robot inside a steel cage.

In the 21st century, that goal -- eliminating human workers -- has few proponents. Accordingly, that's not the objective for the next generation of robots. Roboticists are now focusing on robots that collaborate with and enhance the ability of humans, rather than compete with us. These robots can operate in close proximity with humans. For example, the da Vinci robots now used in over a thousand hospitals for minimally-invasive surgery are controlled by humans, in this case by surgeons working a few feet away: the robot system transforms the surgeons' natural hand motions into equivalent motions of miniature robot grippers that move in synchrony inside the patient's body. 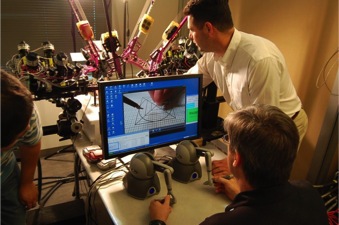 A human surgeon training a telerobot.

Our robots are signing up for online learning. After decades of attempts to program robots to perform complex tasks like flying helicopters or surgical suturing, the new approach is based on observing and recording the motions of human experts as they perform these feats. Statistical Robot Learning, pioneered by researchers such as UC Berkeley's Pieter Abbeel, infers the underlying intentions of experts by analyzing patterns in their motions. My students and I are working with Abbeel on a new project to incorporate models of sensing so that these robots can cope with noise and adapt to changing conditions.

This approach to robots requires new research. In June, President Obama announced the $70 million National Robotics Initiative, focused on robots that work with people to augment human capabilities. The European Commission recently launched an $800 million research program in robotics and cognitive systems and similar programs are underway in Japan, Korea, and Australia. In his State of the Union address last January, President Obama announced, "This is our generation's Sputnik moment." Noting that in a single generation, revolutions in technology have transformed the way we live, work and do business, Obama stated that what is "at stake is whether new jobs and industries take root in this country, or somewhere else."

As humans embrace new forms of social media to keep connected with friends and colleagues, our robots are becoming increasingly sociable. Researchers at Google and several university labs are working on "Cloud Robotics," where robots benefit from four aspects of the Internet: (1) the availability of thousands of cloud-based processors to compute solutions remotely, rather than onboard the robot, (2) vast databases of information describing the physical properties of environments and commercially-available objects, (3) the ability of robots to share information with other robots about past successes (and failures), and (4) the availability, when all else fails, to contact remote human operators to ask for advice. The extensive database of human-engineered roads in Google Maps is one of the secrets to Google's autonomous car project. There are also many Open Source projects in robotics such as the Robot Operating System (ROS) hosted by Willow Garage, where models, software, and repositories of benchmark data are openly shared to advance the field.

The new motto of Robotics could be: "No robot is an island." If our robots are reflections of ourselves, then maybe we're moving toward a more inclusive understanding of the world and those we share it with. Or maybe we're still in denial like Hal. Given how much we enjoy Facebook, it's possible we'll soon see "Interface-book," where our robots will also stay up late making friends and exchanging data.