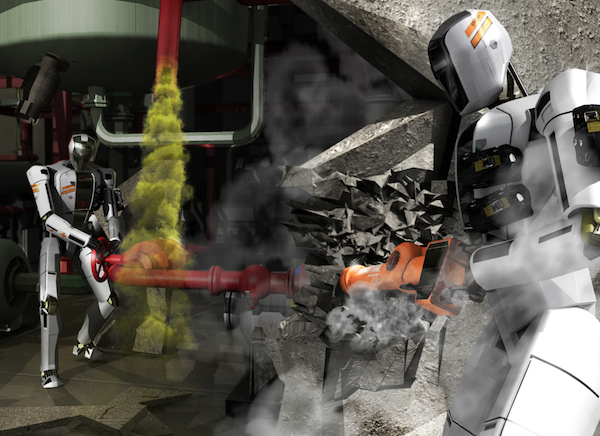 Illustration of a disaster response scenario part of the DARPA Robotics Challenge: The robot on the right uses a power tool to break through a wall, and the one on the left turns a valve to close a leaking pipe. Image: DARPA//

You don't have to speak scientific-ese to understand just how important it is to develop robots that can do what no mere human can do in times of crisis.

Take the Fukushima Dai-ichi nuclear accident as an example of a disaster that would have benefited from more capable robots. In the first 24 hours at Fukushima, human workers attempted but ultimately failed to fix one of the crippled reactors.

...they had fire trucks on hand, but after the first reactor explosion, they could not have people drive those fire trucks because the contamination was high. We want these robots to really be compatible with all tools.

Driving robots? That makes perfect sense. I'm so glad that better minds than mine are hard at work on this.