When Apple introduced iBooks 2 and iTunes U at a media event on Thursday, the mega-corporation put forth its idea of what a future classroom should look like, with graphics-heavy, interactive iPad-based textbooks and a more intuitive curriculum portal for teachers.

Now, a new study is out that has asked a very different group -- with an equally large stake in education -- what they think the future classroom should look like. The test group? 8-to-12-year-old schoolchildren.

Creative research firm Latitude, in collaboration with the LEGO Learning Institute & Project Synthesis, asked 348 kids between 8 and 12 years old from six different countries (USA, England, Australia, Germany, France and South Africa) to both draw and explain their answers to the question, "What would happen if robots were a part of your everyday life?" (A selection of their adorable drawings and responses are below.)

Before we get in to the hand-drawn cuteness, a few notes on the survey reuslts: First, the tots were asked this question in the context of the classroom, and, perhaps unsurprisingly, one of the most common answers amongst the youngsters was that they wanted a robot that could do their homework for them. Besides that, however, the researchers at Latitude found a few other common themes:

1) Kids want their robots to act as role models ("[M]any created humanoid peers they could identify with and aspire to be like")
2) Kids wanted their robots to be likable and sociable ("[R]obots simply helped to illuminate what kids value in social scenarios. Robots possess an enviable ability to fit in with others and to navigate their peer environments precisely because they're smart.")
3) Robots should be "patient and supportive" when teaching ("Robots are better versions of our teachers and parents, offering limitless time and patience, encouraging confidence and self-direction, and allowing us to make mistakes sans self-consciousness.")

(Another theme is natural human interactivity in general, which does not exist in Apple's iBooks, Inkling's e-Textbooks, or in any of the other future education leaders' most advanced prototypes. Though Apple has been rumored to be adding Siri, its human-replicating, machine-learning voice assistant, to future devices, it is currently only available on the iPhone 4S and not as a teacher-surrogate on the iPad 2 or within iBooks 2).

For more tropes and themes from kids' wishes for their robots partners, and Latitude's recommendations for the ways in which tech companies and educators can leverage the findings of the survey, read the full report here.

In the meantime, you can judge for yourself what the edu-bots of the future should look like and be capable of -- and perhaps simultaneously have that heart of yours warmed -- with a few of our favorite drawings below. (For a full gallery, head over to Latitude's Flickr page). Read on to see how Apple plans to reshape the future of learning. 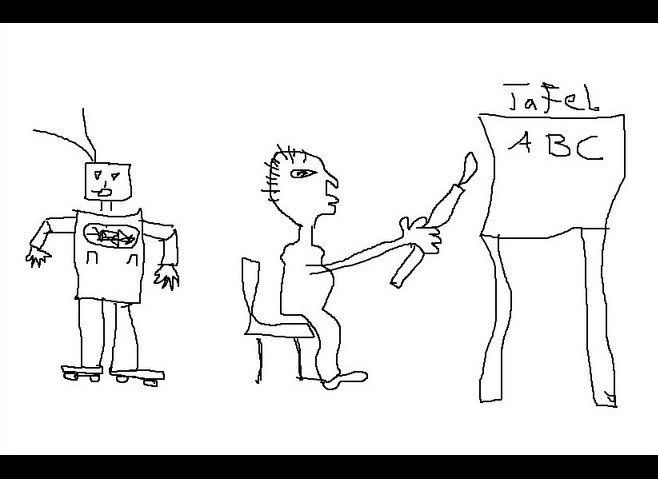 1 / 13
Boy, 9, Germany
"When I get home, my robot helps me with my homework. My mother and father [came in and said] no video games now, homework first, but when they saw that I was already finished and had done everything correctly, they were glad that I had made friends with the robot. It could do everything--play soccer, build Legos, read, do math, write and all the movements a person can make. Since my parents really are always at work a lot, they can't always help me or play with me or cook something. Now the robot helps them with that." Photo credit: <a href="http://www.flickr.com/photos/37527143@N03/6669345125/in/set-72157628799529293" target="_hplink">Latitude</a>
Latitude